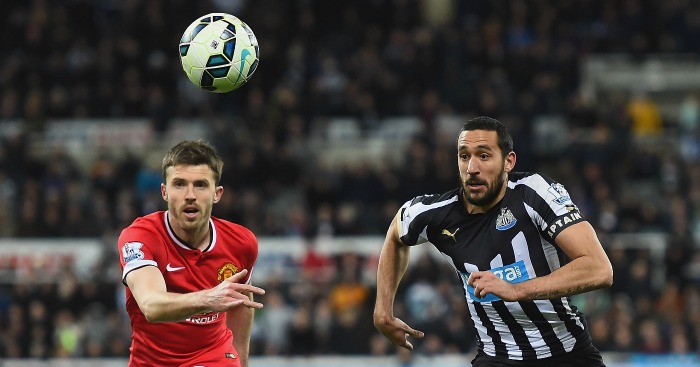 They’re all out of contract this summer. They could be coming to a club near you…

Michael Carrick to Newcastle
On Sunday there was fanciful talk in one of those small, red-topped newspapers that ‘Newcastle could be tempted by the untried partnership of Manchester United duo Ryan Giggs and Michael Carrick’, but we think it’s fair to say that the relegated Magpies would be rather more tempted to keep Rafa Benitez and bring Carrick home to the north-east, 19 years after he left for West Ham. A boyhood Newcastle fan (“it was pretty much the only choice”), Carrick would be the perfect metronome midfielder for the Magpies in the Championship. If he was tempted when Newcastle were managed by Steve McClaren – and reports in the north-east suggested as much – he would probably walk (sideways) all the way to St James’ Park if Benitez stays.

It’s fair to say that the fans want it…

Leon Osman to Leeds
Lewis Cook and Alex Mowatt are excellent players but they are 19 and 21. You know what they need? A 35-year-old former England international looking for at least another season at a big club. With Leeds likely to sell the infuriatingly inconsistent Luke Murphy this summer, Osman could be the perfect man to guide Cook and Mowatt through their last Leeds campaign before their agents get them out of that Ell-hole. Cook has already played under five Leeds coaches; a reminder now that he is just 19.

“I’ve been at Everton my whole career,” said Osman recently. “I’m not going to sit here and say I’m never going to move but if there’s not an offer, I’m not going to finish just yet so I’ll look at all offers.”

Let's throw one out there. Sensible players that would improve Leeds next season??

Obviously, this all goes to sh*t the minute that David Moyes gets another job.

Kolo Toure to Celtic
If you don’t harbour at least a little bit of love for Kolo, I’m not sure we can be friends. The ultimate renaissance man, Toure is now 35 and about to play in a second European final, ten years after losing the Champions League in Arsenal colours. “I won a big trophy in my last game for the Ivory Coast and I hope I can do the same with Liverpool,” he says. “In 15 years this is only my second European final – they’re tough to get to.”

You know what’s not so tough to win? The Scottish Premier League if you’re Celtic. Should Brendan Rodgers take that job – and reports suggest he is in talks – then Toure will surely soon follow; he could eke out another two years at that level. This is the man described by Rodgers thus: “The thing with Kolo is he gives me everything every single day.” They could soon be together again.

Kieran Richardson to Hull (if they go up)
There’s nothing that makes Steve Bruce feel sexier than a fellow former Premier League winner with Manchester United. Richardson has played under Bruce before at Sunderland, where he described him as a “top manager” on many occasions. It helps that Richardson is a good friend of Steve’s son Alex, and it helps that Richardson will play literally anywhere on the pitch if it means he gets to stay in the Premier League. Think that he will never get another top-flight club after his performances for Aston Villa over the last two years ended in relegation? You have obviously already forgotten Fulham.

Sorry Hull fans, but you’re about to lose an Andrew Robertson and gain a Kieran Richardson.

Stephane Sessegnon to Middlesbough
It’s a year since the Benin winger reportedly took a £400 taxi home to the Midlands from the north-east after being left out of a match-day squad by Tony Pulis, who could find no room for a skilful winger once he had picked seven centre-halves, five central midfielders and two big lads up front. Sessegnon is on a reported £50,000 a week and that may the deciding factor as a local newspaper poll suggests that the majority of West Brom fans want rid.

West Brom’s loss could be Middlesbough’s gain. Assuming Gaston Ramirez gets a better offer after the Copa America, Boro could be in the market for the only West Brom player to create more than one chance per game this season. We assume he would take a pay-cut.