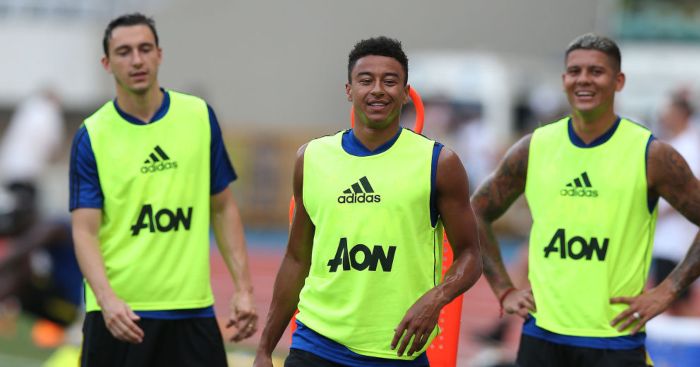 During long days and longer weeks they jog, sprint, stretch, pass, shoot and tackle. Everyone is desperate to re-familiarise themselves with the elite level of performance that slips away so easily after only a month or so off.

Pre-season is the chance at a fresh start, but also a time of uncertainty. Your club will sign new players, and look to shed others. The principle of shared camaraderie is tested as friends jostle for a place at the front of the queue. It’s survival of the fittest – often literally.

August brings with it the end of one road and the beginning of another. You walk down the tunnel and onto the pitch and the tingles return. In those tingles lies the proof that the hard work was worth it. Of course it was; it always is. This is what you live for.

Or at least that’s the plan, the shiny marketing image of a footballer’s life that sells adversity and determination as a prelude to guaranteed redemption. The sport’s drift from its working-class roots to celebrity culture has indoctrinated many into believing that footballers live rent-free on easy street. They are paid to do something that we – and they – love, after all.

But the start of the football season isn’t good news for every player. The focus may be on new beginnings, hopes and dreams, but some don’t get that start. If pre-season creates democracy or at least meritocracy, hierarchies are soon formed. Some players will feel cherished, some far less secure. Coaches understandably focus more on those likely to play regularly.

Watford currently have 34 players listed in their first-team squad. In the Championship, Nottingham Forest see that figure and raise you: their tweet detailing the shirt numbers for 2018/19 drew interest because it contained 38 players. Both clubs can only name 18 in every matchday squad, leaving an awfully long list of the disappointed and disillusioned.

A similar thing happens to greater and lesser degrees across the many professional leagues. For them, the new season is very different.

One of the results of shifting the transfer window to before the start of the season is that players can be caught in suspension. They spend pre-season desperate to impress coaches and manager, then have their unwanted status made emphatically clear on the opening weekend. Some will spend the next fortnight scrambling for moves to lower-league or European clubs that can only be described as panic buys for both parties. If that does not materialise, the next few months become crushingly predictable.

Being essentially on-call for a job that never arrives might sound cushty to the uninitiated or deliberately one-eyed – “You’re paid for doing nothing? Sweet” – but the reality is the opposite. Footballers are happiest when they are playing football.

This is the great myth of unemployment benefits, that vast swathes of the country are content to pick up their allowance and do nothing. It’s a damaging stereotype used to establish resentment in society. Everyone wants to feel valued and valuable.

Beyond that, sport creates unique issues for excluded employees. For footballers, football is life. Most of us can switch off the computer or leave the office and vow to do more tomorrow, but the life of an elite sportsperson is different. They have been hardwired to live and breathe the game; only through total dedication from childhood can they make the grade. Having that oxygen forcibly removed creates a cavernous gap.

A gas engineer never called out to a job will suffer financial consequences, but imagine that engineer had trained exclusively from the age of eight to fulfill that dream. The dedication fuels the fire of obsession that makes setback so much harder to process.

Sportspeople also have to keep training, or risk falling further back into the shadows. To accept their marginalisation is to allow decline to fester. Therein begins a tough cycle: Work harder to try and improve and impress, but in doing so only leave yourself more open to a greater fall. The more effort put in, the more the human psyche requires recognition for it.

Scientific research concludes that being excluded or ignored activates the dorsal anterior cingulate cortex (dACC) in the brain. That’s the same cortex that is activated when we experience physical pain, suggesting that that exclusion is processed in the same way as actual injury.

The psychological effects are predictable. It is accepted wisdom that feelings of worthlessness can change behaviour: increased paranoia, difficulties in maintaining social relationships, isolation and an erosion of self-confidence. That’s particularly cruel in elite sport, where confidence plays such a key role in performance. So if a chance does come, those players are less prepared to take it. They are placed on a path to continued failure that becomes harder and harder to shift.

Scott Miller, a former professional player who worked as a coach at Fulham between 2007 and 2014, describes the potential cycle: “For me it was a strange experience, as it was seemingly overnight that I began experiencing feelings of hatred for the game, which to you may sound strange, as it was my complete passion from an early age,” he told Ask Men.

Aaron Lennon, whose high-profile detainment under the Mental Health Act in 2017 helped shape football’s conversation about mental health issues, revealed in an interview with the Daily Telegraph that it was falling out of favour at club level that triggered his own decline.

“You start getting to that stage where you don’t actually feel like a footballer,” Lennon said. “You train throughout the week and you’re not involved at the weekend, then it becomes difficult. So that was tough. For me, not playing at the end of the week, you’re going home not a happy person and you’re not enjoying it.”

There is no easy answer; perhaps no answer at all. Football is competitive sport, not a school sports day where everyone wins a prize. Managers who people please are likely to provoke their own failure. The key lies in support for those who suffer rather than a cure.

For too long, the effects of exclusion were exacerbated because footballers were programmed not to display any signs of weakness. Doing so might further harm their chances of breaking into the team. The hope is that the conversation is changing, but we must do more. Society has its own role to play, because sympathy for footballers is still thin on the ground. Remember the golden rule that too many cannot accept: money is no vaccination against mental health issues.

For those scratching around with little to do and little choice but to keep on keeping on, August can be a tough month. If pre-season at least brings everyone together in the same boat, they soon drift apart. A new season brings new hope, but remember the travails of those who aren’t involved.