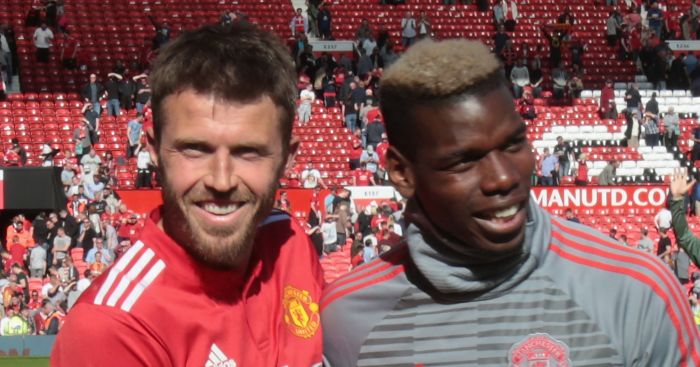 Michael Carrick claims Paul Pogba is a “big player” for Manchester United and has dismissed any rumours that he will leave the club this summer.

The Red Devils paid Juventus £89million for the midfielder in 2016 but his time at United hasn’t gone completely to plan.

Jose Mourinho left him out of number of key matches this season as his form dipped at crucial points in the season.

That has led to speculation that Pogba could be on his way out of Old Trafford this summer but Carrick – who will become a coach at United next season after he ended his playing career – reckons the Frenchman will remain at the club.

“Of course he’s got a future, he’s a big player for us, he’s a great age, he’s got his peak years ahead of him,” Carrick told Sky Sports.

“It’s not even something I’d give a second thought to, to be honest.”

And Carrick says the club as a whole are looking to improve next season after the campaign ended trophyless for Mourinho.

“Like the manager said before the game, the manager isn’t going to judge the team on one game,” Carrick continued. “We’ll learn, we’ve managed to pick up trophies in the last few years, and obviously not winning one is not ideal for us.

“But we’re looking ahead now, whether we’d won it or not you don’t look back, we’ve got to look to next season and it has to be a big one for us.

“We’re not looking at City, Chelsea, Arsenal, Tottenham, anyone. We’re looking at ourselves to improve, we believe we’re capable of improving a lot and we’ll see where that takes us.”