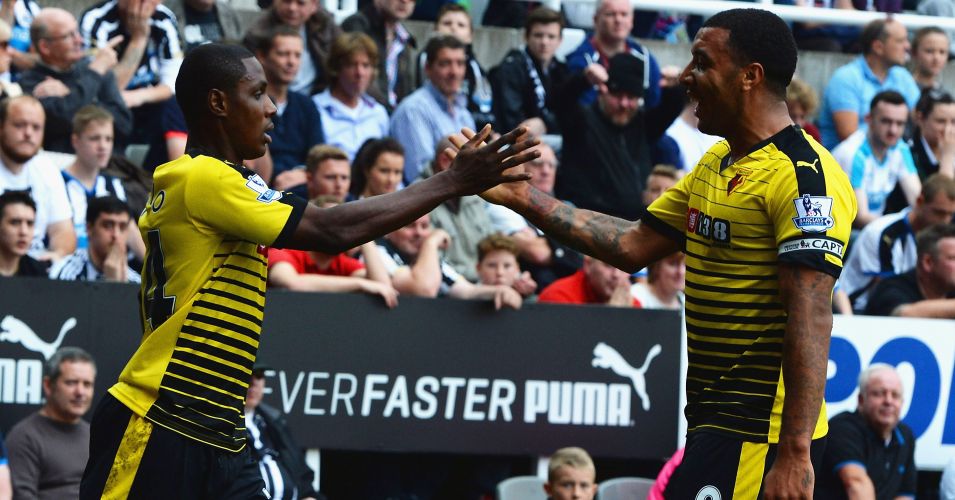 Newcastle’s winless start to the Premier League season continues after Watford ran out 2-1 winners at St James’ Park on Saturday.

Odion Ighalo was the scorer of both goals for the Hornets to take his seasonal tally to four, with the striker benefiting from good play from team-mate Troy Deeney in particular.

Watford have now won back-to-back Premier League games after victory over Swansea in their last match, but defeat leaves Newcastle in 19th and without a win in their opening six games.

Nigeria international Ighalo struck on 10 and 28 minutes as he took advantage of some pitiful defending to give the promoted Hornets what proved to be a decisive lead.

Daryl Janmaat reduced the deficit with a 67th-minute strike, the Magpies’ first goal in 464 minutes of Premier League football, but it was not enough to rescue a point.

Head coach Steve McClaren insisted in the run-up to the game that he was not worried by his new-look side’s start to the season despite their tame surrender at West Ham on Monday evening which saw them slip to the foot of the table.

By the time he headed to the dressing room at half-time, the alarm bells were only being drowned out by the boos echoing around the stadium.

A toxic blend of pitiful defending and powder-puff attacking play allowed Watford to put their energy and commitment to good use as Ighalo and Troy Deeney terrorised Fabricio Coloccini and Chancel Mbemba to leave the Magpies fighting an uphill battle from the off.

The visitors were given a helping hand as their good start became a great one when Newcastle full-back Massadio Haidara gifted possession to wide-man Almen Abdi and saw the Hornets capitalise fully as Deeney and Etienne Capoue combined to feed the ball to Ighalo, who stepped inside Janmaat’s lunge before powering a 10th-minute shot into Tim Krul’s bottom corner.

Newcastle’s response was tepid to say the least, and Watford increased their lead with 28 minutes gone when Deeney’s through-ball split a static home defence and Ighalo ran through to round the stranded Krul and finish.

The Magpies were in dire trouble. They were able to create little with Papiss Cisse appealing for a seventh-minute penalty when he should really have scored amid a goalmouth scramble and Florian Thauvin only just failing to get his head to Moussa Sissoko’s wayward shot.

Their final ball was too often weak and aimless with Thauvin in particular a culprit, although it was the Frenchman who forced keeper Heurelho Gomes into his only real save of the half with a well-struck 39th-minute drive.

McClaren replaced the ineffectual Cisse with Siem de Jong at the break, pushing Ayoze Perez into the middle after a relatively anonymous opening 45 minutes on the left, but while that gave his side a better shape, they struggled to break down a well-organised Hornets’ defence.

But they gave themselves a chance with 28 minutes remaining when Janmaat ran on to Thauvin’s ball and exchanged passes with Sissoko before rifling the ball inside the far post.

It took a last-ditch tackle by Chancel Mbemba to deny Deeney three minutes later, and Gomes had to throw himself full-length to keep out Janmaat’s 67th-minute piledriver, although there was to be no salvation for the home side.