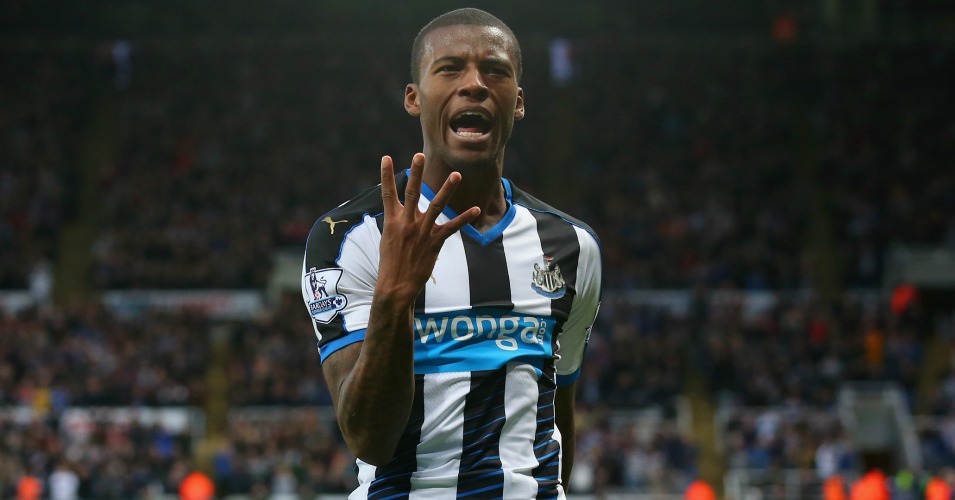 Georginio Wijnaldum scored four times as Newcastle finally recorded their first Premier League win of the season with a 6-2 victory over Norwich.

Wijnaldum scored twice in the first half and capped off a fine evening for Newcastle with two more in the second as Steve McClaren finally earned three points for the first time since his appointment as manager.

Wijnaldum opened the scoring for the hosts after a quarter of an hour, only for Diumerci Mbokani to reply for Norwich little over five minutes later.

Dutch international Wijnaldum put the Magpies back into the lead with a well-taken header from a cross from Moussa Sissoko, who also provided his first goal. Ayoze Perez then doubled their lead on 33 minutes, only for Nathan Redmond to respond almost instantly to make it 3-2 heading into half-time.

Norwich came close to leveling the scores in the second half, with Wijnaldum needed to clear off the line as the visitors assumed dominance, but two quickfire goals on the counter-attack, the first from Aleksandar Mitrovic and the second being Wijnaldum’s crowning glory, ended any hopes of a comeback. Wijnaldum then secured a long-awaited win for the baying home crowd with a late deflected strike for his fourth of the day.

As he welcomed his players back to the dressing room at the break with the scores at 3-2, McClaren’s emotions will have been decidedly mixed after 45 minutes which had seen them play some wonderful, incisive football and also twice gift Norwich a way back into the game.

Much has been made of the Magpies’ summer recruitment drive in the wake of their poor start, but Wijnaldum once again demonstrated his class in tandem with the infuriatingly enigmatic Sissoko.

At his best, the Frenchman is a menace when he runs at defenders and powers his way towards the penalty area, and that quality was much in evidence before the break.

Unfortunately for him, so too was his capacity to switch off when not on the ball – and he was not alone – and that helped to keep the visitors in touch.

Newcastle took a 14th-minute lead when after a one-two between Sissoko and Mitrovic had not come off, the France international calmly shifted the ball before sliding it into the path of Wijnaldum, who finished with aplomb.

The lead lasted just six minutes when Sissoko’s absence allowed Robbie Brady, who had earlier rattled a post from distance, to find Martin Olsson down the left and his inviting cross was touched home by Mbokani.

However, Wijnaldum struck once again to head Sissoko’s 26th-minute cross past goalkeeper John Ruddy, and when Perez beat Ruddy from close range after Olsson had blocked his initial effort, the Magpies looked to be well on their way with 12 minutes of the first half remaining.

But Norwich grabbed a second lifeline within seconds when not only was Olsson allowed time and space on the left to cross, but Redmond was similarly unchallenged as he volleyed home from beyond the far post.

City boss Alex Neil saw his side lay siege to the Newcastle goal during the opening stages of the second half, but their task became more difficult with 64 minutes gone.

Sissoko floated the ball into Mitrovic’s run and the Serbia international controlled with his chest before smashing a left-foot volley past the helpless Ruddy, whose afternoon took a further turn for the worse two minutes later.

Sissoko and Wijnaldum combined to allow Daryl Janmaat to cross and Wijnaldum timed his run to perfection to complete his hat-trick with a close-range header, and although Redmond struck the upright, the Holland international’s 85th-minute shot deflected into the top corner to round off a good day for his team.