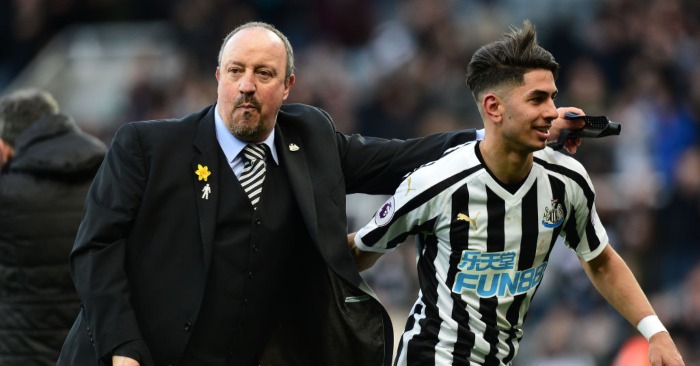 Finally some good news for Newcastle United supporters, with the club insisting that the £30m earned through the sale of Ayoze Perez to Leicester City will be placed straight into the transfer budget. Add that to the Andy Carroll and Georginio Wijnaldum money and there’s a lovely pot building. And the Alexandar Mitrovic fee. And Yohan Cabaye. And Mikel Merino. And Florian Thauvin. And Andros Townsend. And Moussa Sissoko.

‘Budget’ has very different meanings depending on whether it is used as a noun or adjective, of course. Perhaps that is the cause of a silly mix-up. Supporters, players, most of the staff and the recently departed manager prefer the noun, an amount of potential expenditure that grows in line with the club’s increasing revenue. Mike Ashley prefers the adjective: cheap, cut-price, thrifty, low-cost.

At any functioning football club, Perez’s departure could reasonably be sold as a success. The Spaniard has been patchy during his time in England (although was excellent for periods of last season), enjoyed a strong relationship with the manager who is no longer there and Newcastle will make a profit of over £28m. This is what we tell clubs outside the financial elite to do: buy low, sell high, invest wisely.

But Newcastle United is not a functioning football club. It’s barely a football club at all, a husk of a once great institution that cries out in the night for due care and attention. Newcastle are not Notts County or Bury, clubs battling merely to maintain their existence, but that doesn’t absolve Ashley of any blame or make this situation any less sad. There is sorrow to be found in cruelty as well as extinction; this isn’t a competition. Newcastle are a club where the bright dawn never arrives, made dark through a thousand broken promises.

Investment in Newcastle’s squad should not be mis-sold as a luxury to be appreciated by fans, but a necessity. Ten outfield players appeared in more than 25 matches last season. One is being sold (Perez), two have departed after loan deals (Salomon Rondon and Kenedy) and another has been released on a free transfer (Mo Diame). Supporters in these circumstances might cling onto the enthusiasm of youth and local pride, but Sean Longstaff is likely to leave for Manchester United.

Newcastle have the money, after all. The latest Deloitte Football Money League placed their 2017/18 revenue as the 19th highest in Europe, directly behind Milan, Everton, Schalke and Roma and directly ahead of West Ham, Leicester City and Napoli. West Ham have just bought one of Spain’s best young players. Leicester City are building one of the best training grounds in Europe. In his interview with The Times’ George Caulkin last week, Benitez spoke of promises about similar improvements at Darsley Park. “Three years later, they painted the walls,” was his lament.

As it stands, Newcastle’s two highest scorers from last season likely to still be at the club in August are Fabian Schar and Ciaran Clark, two central defenders. Clark started nine league games. Newcastle don’t have a manager, and you’d have to question the sanity of anyone who willingly catches this hospital pass. There is just over a month until the new season begins.

Not saying Newcastle United are in trouble, but when Ayoze Perez leaves their top goalscorer from last season will be a centre-back who missed three months of the campaign through injury.

For most supporters, Benitez was the one remaining talisman, the glue that somehow held this shoddy arrangement together. His greatest achievement lay not in keeping Newcastle away from relegation trouble, but creating a spirit amid the torment that even made it possible.

That a manager with no previous connection to the club represented supporters’ strongest connection to it is an emphatic damnation of the mood Ashley has created. The one remaining, desperate hope was that Benitez would be able to use his overperformance as leverage with the owner to expunge the club’s dormancy. In losing the one manager who united Newcastle’s support more than anyone since the early days of Sir Bobby Robson’s reign, they have plunged new depths.

Neil Redfearn is viewed as a likely replacement, the newly-appointed assistant coach of the club’s Under-23 team. He ticks two Ashley boxes: cheap and underwhelming. Redfearn has managed a total of 109 matches across six permanent managerial jobs since 2005. He has never lasted more than 33 games in any of them.

As if to serve a foul-smelling dessert to follow the shit sandwich, takeover talk has gone quiet. Newcastle United is a good news vacuum into which everything is sucked; Ashley’s departure is the only possible way for green shoots to appear. There is no story arc in which the owner gains forgiveness, just more despair that haunts fans and Ashley seems impervious towards.

Boycott and outright mutiny is now the only reasonable response. Ashley may not even listen to that, but he has listened to nothing else and there are no other paths left to tread. There is already talk of large swathes of supporters missing the first home game of the season against Arsenal. Information on requesting refunds for season tickets has been widely shared on social media.

But if boycott is the answer for some, to others it is the final acceptance of defeat. Giving up a season ticket means losing precious away points earned in Kharkiv, Barnsley and hundreds of places in between. But it represents more than that. Why should one man, so wilfully oblivious to their loyalty and love, stop them attending their church? This is Ashley’s Choice: A bad experience or no experience at all?

Rafa Benitez punched above his weight at Newcastle, and they punched above their weight by calling him theirs. But as ever with this club, the knockout punch is self-inflicted. Only a takeover completed in the next month avoids the drudgery of yet another dismal season under the Eye of Sauron. The warning to supporters against getting their hopes up barely registers anymore. Hope barely lives here anymore.