Newcastle fans. You can choose to accept or reject, but whatever happens, it is still all down to you. 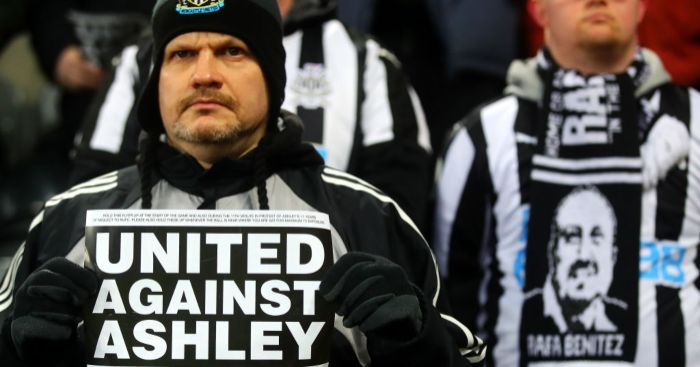 Here we go again. Can anyone stand another ceaseless, indignant, repetitive tsunami (or indeed Toon Army) of whataboutery in relation to the sale of Newcastle United to the Public Investment Fund of Saudi Arabia? We’ve been over these arguments time and again, haven’t we? The whole thing is so dispiriting as, once again, battle lines are drawn.

If you’re happy with the potential new owners – and many are – please, just accept that plenty of people are very uncomfortable with these potential new owners. Their reasons, whether you think them right or wrong, are not grounded in anything other than a sense of moral unease about hooking the club to a regime which has well-documented human rights abuses, is undemocratic, autocratic, brutal and frankly unaccountable.

That’s all. They’re not trying to get at you. They’re not trying to put you down. Worrying about human rights abuses is not a bad thing. Human rights are, after all, more important than football, more important than your football club. If our human rights were being abused by the state (and you could argue they are in the complacent manner the government initially treated the pandemic, leading directly to thousands of deaths) we’d want people to shout about it, or at the very least, express discomfort, wouldn’t we? That’s all anyone who is opposed to the House of Saud’s investment in the Mags is worried about. Even if you’re fine with it all, people who are not fine with it all are not your enemy. And even if you don’t share any of their worries, can you really blame anyone for having them?

Even if you think a media critic of the takeover isn’t being even-handed in their criticism and has not made the same pointed attacks of other similar club owners (even though they often have) – which is always one of the core bellyaches of whataboutery – that doesn’t invalidate the questions they ask, or the doubts they have. It doesn’t wipe the problems away.

No mention of this when City were taken over ✅
Your paper is Saudi owned ✅
What about boxing in Saudi Arabia? ✅
We just want Ashley gone✅
[Mbappe “crying”] gif ✅
What about Saudis at Sheff Utd ✅
“Nonce” ✅
Already calling house on my NUFC fans v @MiguelDelaney bingo card

Even if you deem newspaper critics to be massive hypocrites by taking a wage from a newspaper or media outlet owned in full or part by the same regime (even though the financial interconnectivity of everything means no-one has even as much as six degrees of separation from their income and something or someone bad) – again, this is another core aspect of whataboutery – that still does not invalidate the questions they ask, or the doubts they hold. They are not trying to stop NUFC being successful, they’re concerned about far bigger, more profound questions to do with freedom and oppression.

The fact that other clubs are owned by similar people is not a get-out clause which excludes the club from scrutiny and neither does the fact that fans of other clubs would want such monied owners too. You can’t dodge accountability by hiding behind shallow whataboutery.

Don’t pretend it’s all about the critics, their supposed bias against your club, or their supposed hypocritical bigotry. It isn’t. It’s all about you. Take it on the chin. Front it up. Say you don’t care about human rights in other distant countries, or say you feel powerless to resist it or to make a difference. Say that you hope this will raise their profile and will actually shine a light onto their regime. Say you’d rather it wasn’t happening but frankly, as long as the club is successful, you will put up with anything up to and including state persecution of specific groups. Just say the only thing that matters to you is winning games and trophies, if that really is all you’re bothered about. But do have a line which you will not cross or endorse, even if it is just protesting the stocking of official NUFC bone saws in the club shop. Make any justification you feel is right, but do it openly and honestly. Don’t try and hide or deflect criticism onto others. It’s not about them. It’s about you. You’re the fan of the club, so it’s on you to accept new owners or not.

So it’s as well to understand what is really happening. Okay, put the Saudi flag on your Twitter profile, but know what that means, what that is doing, what you are aligning yourself to and what you may be complicit with by doing so. Don’t be defensive about this. We live in a world full of ambiguity and there are many times when you can’t do right for doing wrong. Just think about it. Think about these people, who they are, what they are, what they believe in, what they represent, what they do and why. Take all of those things personally. It’s your club. It is to do with you.

This isn’t about the southern media hating or not understanding the club. It’s not about biased journalists or anyone else at all, no, it’s all about you and what you will or won’t accept. Never forget that. No matter who is buying your football club, they require your compliance to stay in business. You still have all the power as a collective and the north east knows all about the power of collective action. Choose to accept or reject, but whatever happens, it is still all down to you.

They don’t need you to like them, or for you to think they’re great; they just need you to be a pliant customer and, if possible, to do their bidding for them in order to promulgate their munificent, benevolent image. They will need you to turn a blind eye at times and they will provide you with reasons and excuses as to why you should. They will provide a clean veneer for you to defend, even if underneath is something far less savoury. Their money will make the club way more successful, they will invest in the local infrastructure and training facilities, hoping that you will be compelled to proselytise on their behalf and say, look at everything they’ve done. How can this be bad? And that’s when the takeover will be truly complete, the past rewritten and the bright light of money forever blinding.