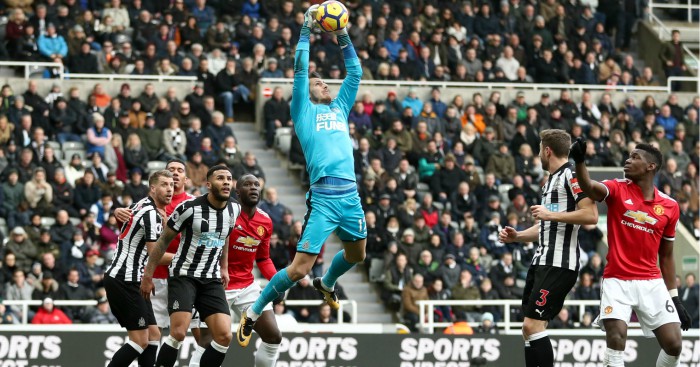 Martin Dubravka has insisted he is not yet a Newcastle hero despite manager Rafael Benitez telling him to go and buy a lottery ticket following his stunning debut against Manchester United.

The 29-year-old Slovakia international goalkeeper made a string of fine saves in his first appearance for the Magpies, including a one-on-one duel with Anthony Martial, as Benitez’s men secured a priceless 1-0 Premier League win over United on February 11.

However while the loan signing from Sparta Prague, who could make his switch permanent during the summer, wants to write his name in Geordie folklore eventually, he is adamant he has done nothing yet.

Speaking as he prepared for Saturday’s trip to Bournemouth, he said: “Okay I made one save, but I didn’t want to celebrate it.

“Many people said to me after the game I was a hero. My reaction was, ‘It was the first game, you will forget this.’

“Everyone wants to be a hero of a club, of course, but I have to take this step by step from the beginning. I can’t fly in the clouds. If you think things are going to go well from the beginning, then they won’t.”

Dubravka was lauded by a crowd of 52,309 at St James’ Park on the final whistle, but modestly played down his contribution.

Asked what Benitez had said to him after the game, he replied with a smile: “He told me I should buy some kind of lottery ticket and I would win.

“Many of my friends were sending me messages before the game reminding me that we were playing Man United and asking me if I realised that. I said, ‘Of course. Thank you so much for this information.’

“Many friends then sent me messages after the game saying, ‘I am a fan of Man United, but I am happy you won.’ And I was very happy also.”