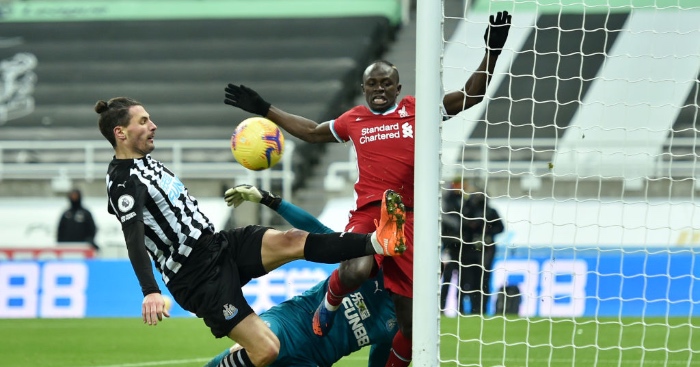 Mohamed Salah endured a tough evening as battling Newcastle fought their way to a goalless draw against Liverpool with some great defending.

Three days after lowly West Brom struck late to snatch a point at Anfield, Jurgen Klopp’s men were frustrated once again. However, it took a late goal-line clearance from Fabian Schar and Darlow’s brilliance to keep them at bay.

Even the most optimistic of Newcastle supporters sat down to watch through their fingers as a side without a win in four games in all competitions, a run which included a Carabao Cup quarter-final exit at the hands of Sky Bet Championship Brentford, came face-to-face with the league leaders.

They would have been pleasantly surprised, therefore, to see the home side start on the front foot rather than soaking up pressure with returning striker Callum Wilson almost catching keeper Alisson Becker unaware with a speculative second-minute shot from an unlikely angle before Joelinton glanced the resulting corner wide.

The Reds needed Alisson to be at his best to deny Wilson once again 10 minutes later after he had shown defender Nathaniel Phillips a clean pair of heels.

However, Sadio Mane burst past Federico Fernandez only for Schar to intercept and Trent Alexander-Arnold steered a James Milner cross into Darlow’s waiting arms after earlier picking out Mane with a stunning crossfield ball as they belatedly slipped into gear.

Liverpool should have been ahead 11 minutes before the break when Salah beat the offside trap to control the ball in front of the advancing Darlow, only to stab his shot wide of the post, and the keeper produced a fine reaction save in stoppage time to repel Firmino’s header from point-blank range.

Mane headed into the side-netting from Alexander-Arnold’s 49th-minute corner and when Liverpool turned the screw with Mane going through his full repertoire of tricks, the Magpies rearguard came under increasing pressure.

But it was Salah who once again should have broken the deadlock with 66 minutes gone when he was played in by Firmino but after steadying himself, directed his effort past the upright.

Firmino was equally wasteful when presented with a glorious chance at the far post three minutes later as Newcastle rode their luck.

It very nearly got much better for the Magpies 11 minutes from time when Ciaran Clark met Matt Ritchie’s free-kick with a downward header which Alisson had to turn away.

But Schar hacked the ball off his own line ahead of Mane seconds later and Darlow brilliantly clawed away another Firmino header at the death to preserve his clean sheet.