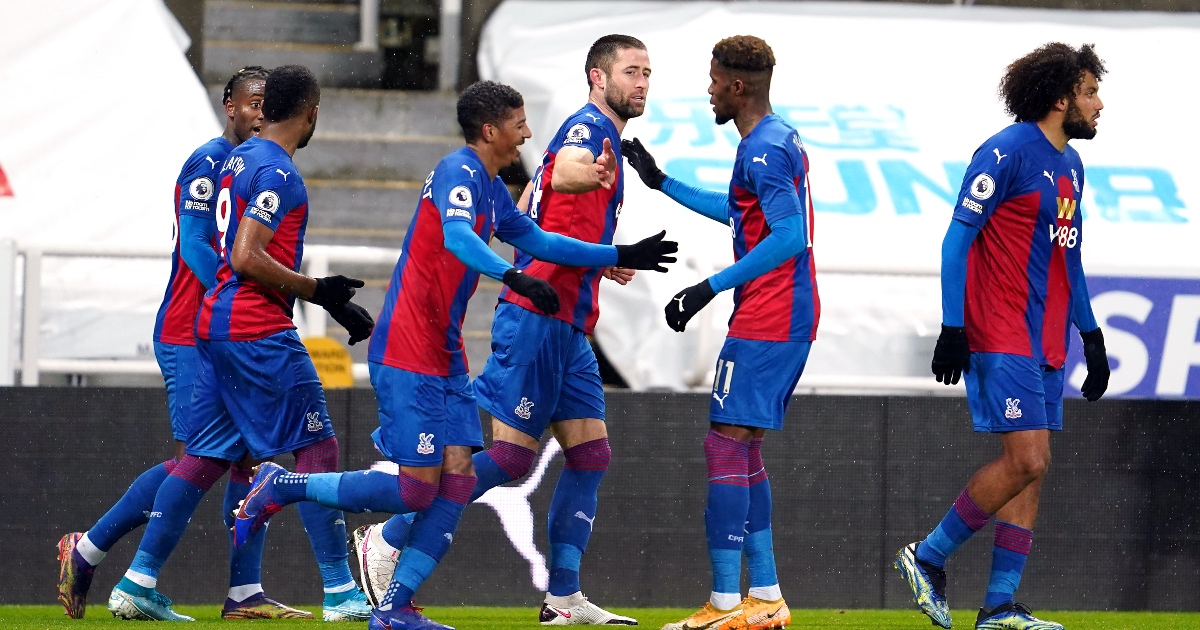 Gary Cahill marked his return with the decisive goal as Crystal Palace came from behind to win 2-1 at Newcastle.

The England defender struck with a 25th minute header to seal an entertaining encounter at St James’ Park.

His goal came four minutes after Jairo Riedewald had blasted them level from 25 yards, cancelling out Jonjo Shelvey’s early opener.

FEATURE: Relive the thrills and spills of January deadline day 2021

Palace were forced to weather a storm both on and off the pitch as Newcastle, boosted by their win at Everton on Saturday, threw everything they had at the visitors in a decidedly open game.

Although the Magpies dominated the second half, they were unable to find a way back into it.

Having seen his side set a fresh benchmark at Goodison Park on Saturday, Bruce demanded more of the same and got it within 71 seconds of kick-off.

Miguel Almiron ran on to Ryan Fraser’s header and lifted the ball over Scott Dann, before crossing to Callum Wilson. He found Shelvey, who thumped a skidding shot past the helpless Vicente Guaita.

But Jamal Lewis did just enough to deny the visitors a 13th minute equaliser as Jordan Ayew dived to head Ebere Eze’s delivery towards goal after Michy Batshuayi had picked him out on the left.

Wilson might have added a spectacular goal to the two he scored at Everton when he instinctively back-heeled Fraser’s deflected effort just over Guaita’s crossbar five minutes later.

However, Palace turned the game on its head as the Newcastle defence were found wanting twice inside four minutes.

They were back on level terms with 21 minutes gone when Patrick Van Aanholt exploited the space he was afforded on the left.

He sent in a cross which Lewis just managed to reach before Ayew, but he could only serve the ball up to the fast-arriving Riedewald. He smashed it past keeper Karl Darlow with the help of a deflection off Ciaran Clark.

Newcastle succumbed once again when Fabian Schar lost Cahill and saw the defender meet Eze’s free-kick with a thumping header which made it 2-1.

Shelvey and Fraser both failed to make the most of Wilson’s barnstorming run of the half-hour when the former stumbled and the latter scuffed his shot at Guaita, but the keeper preserved his side’s lead when he got a hand to Fraser’s lofted 34th-minute shot after he had been played in by Wilson.

The Magpies took control as the first half entered its closing stages and maintained it throughout the second with Wilfried Zaha’s 58th-minute departure through injury further denting the Eagles’ ability to get up the pitch.

But for all the constant probing of Shelvey, Fraser and Almiron, Guaita remained largely untroubled and substitutes Andros Townsend and Andy Carroll both passed up glorious opportunities to change the shape of the game at the death.