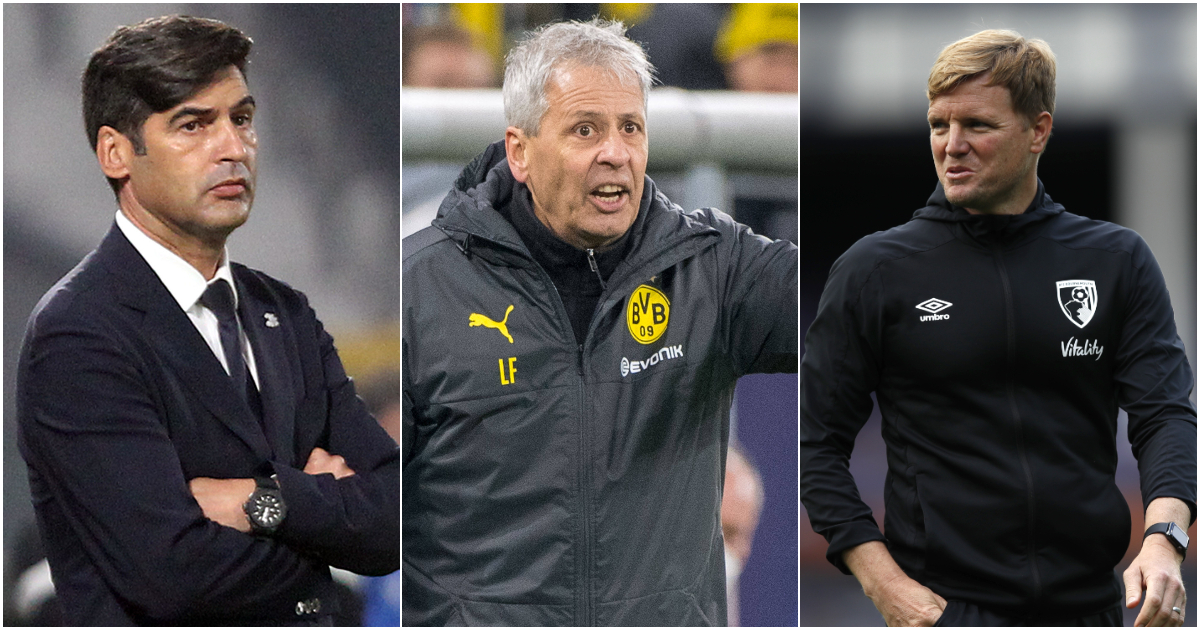 As Bruce shuffles off to apparent retirement fattened by a juicy pay-off that appears to have been agreed as one last f*** you from Mike Ashley to the club’s supporters – what a scamp! – thoughts inevitably turn to Bruce’s replacement.

So just who can you get as manager when money is no object but your team is a touch bobbins? One of this lot, most likely. They all have pros and cons, which is handy given the format of this feature. Read on.

Pros
Being just too cool and sexy and too much of a wild untameable renegade for stuffy old Spurs adds a sense of excitement. Also available having left Roma in the summer; while sorting out compensation isn’t going to be a problem financially for Newcastle, time is very much of the essence and a swift appointment would be useful. Won all the pots and pans in Ukraine with Shakhtar, which is pretty much the same as doing it in England with Newcastle. Has some experience of upsetting apple carts having led Pacos de Ferreira into the Champions League.

Cons
Scraping seventh place in Serie A with Roma isn’t exactly an enticing recent body of work given Newcastle’s planned trajectory. Dodgy spell as Porto boss earlier in his career a bit of a worry, and while Premier League Experience is generally overvalued it would nevertheless represent a pretty sizeable gamble, given where Newcastle currently are and where they want to be, to hand control of their destiny to a man with no experience whatsoever in English football.

Who?
Impossibly young manager who took Bournemouth on impossible journey from the very brink of extinction to the Premier League, and then kept them there for five years.

Pros
Got Bournemouth to punch way above their weight. Knows his way around a Premier League relegation fight which is the initial reality of the situation facing whoever rocks up as Newcastle’s new manager. Seems a fundamentally good egg which might help with the club’s PR drive given, you know, everything else.

Cons
Out of the game since leaving Bournemouth after their relegation in 2020. As both player and manager has never enjoyed any kind of success away from his beloved Cherries. Newcastle is even further away from Bournemouth than Burnley, where he spent two difficult seasons as manager in the early 2010s and much further away than Portsmouth, where he spent two injury-ruined seasons under Harry Redknapp as a player.

Pros
Like Fonseca and Howe is currently out of work and available. Would annoy certain talkSPORT presenters no end. While Dortmund spell ended badly, it hands Favre a certain prestige that might appeal to Newcastle’s newfound sense of entitlement while actually being the sort of no-nonsense manager they need to get them out of their current specific sh*tty predicament. Potentially offers the best of both worlds, and has relevant experience, having taken charge of Borussia Monchengladbach when seven points adrift of safety in 2011, kept them up and then taken them to fourth and the Champions League the following season. That is precisely the trajectory Newcastle are looking for, and Favre has done it before without limitless funds, albeit in Germany which is not England and thus doesn’t really count. Reputation for attacking football would sit well with Toon fans.

Cons
Already being mocked by PFMs just for having the audacity to be linked to the job. Who the hell does he think he is? Would be granted no leeway in the media in a job that is going to have plenty of bumps in the road between now and January. What happens if/when that attacking football leads to a couple of hefty thrashings, which it almost certainly would? The final straw for Favre’s Dortmund reign was a 5-1 defeat to newly promoted Stuttgart. While defeat to Chelsea at the end of this month could be negotiated comfortably enough as par for the course, the two following games against Brighton and Brentford either side of the November international break look trappy as all hell for Favre or any manager viewed with suspicion from the outset. Both represent the dangerous combination of teams who are currently much better than Newcastle but against whom defeat would be unacceptable.