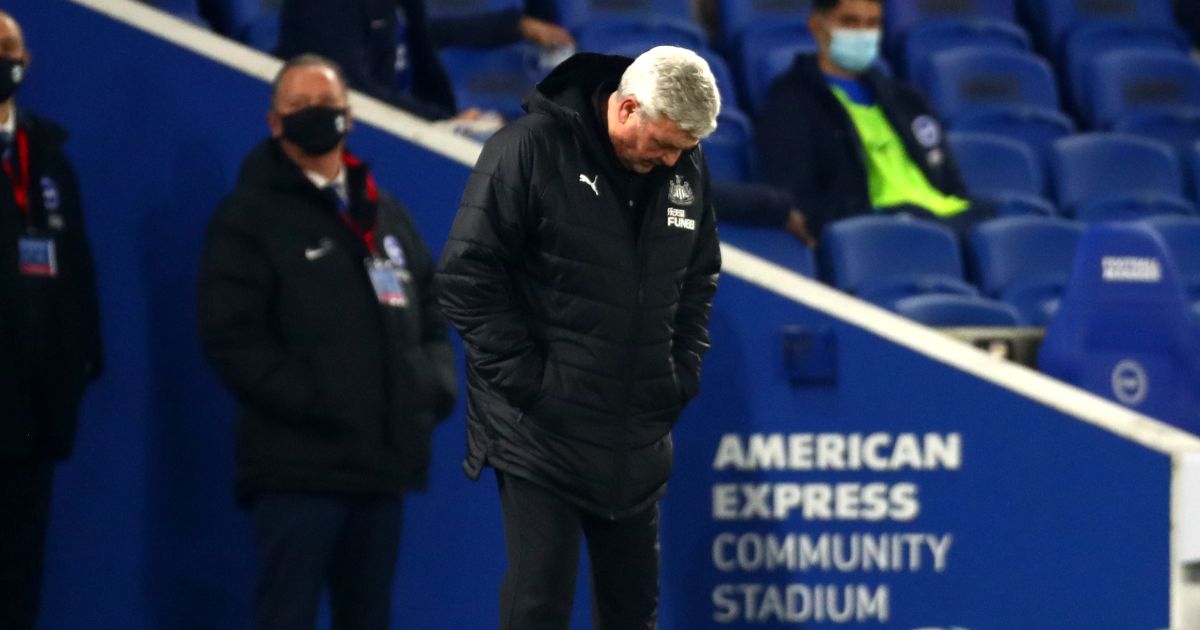 Some Newcastle players reportedly believe Steve Bruce ‘wants to be sacked’ by the club and are ‘confused and concerned’ that Mike Ashley is sticking with his man.

A damning report in the Daily Mail details how Newcastle’s players have been given six of nine days off after their 3-0 capitulation to fellow relegation strugglers Brighton on Saturday night.

That result left them just two points clear of 18th-placed Fulham; they only escaped the relegation zone because the Cottagers lost to Leeds United on Friday night.

Bruce picked a team for that Brighton clash with Joelinton on the wing, while strikers Andy Carroll and Dwight Gayle were left on the bench.

Newcastle mustered just one shot target in a game that the Seagulls absolutely dominated.

And yet the players will only officially train for three days between Tuesday and Thursday this week before a four-day weekend; their next game is against Tottenham on April 4.

One source is quoted in the Mail as saying: “The players are used to doing their own training by now. They are not surprised by the schedule.”

There was said to be ‘shock’ among the players after owner Ashley made it clear that Bruce would not be sacked after that result on Saturday night.

‘There is a feeling among some of the squad that the manager wants to be sacked, with the performance at Brighton the biggest indicator yet that he has lost the support of the dressing-room.’

Pundit Stan Collymore has laid into the Newcastle owner and manager, writing in his Daily Mirror column: ‘Steve Bruce and Mike Ashley are the worst double act in Premier League history.

‘They are driving Newcastle down to the Championship, and neither seem to care.

‘If they did, Bruce would have resigned after that desperate defeat to Brighton, one of the least competitive performances in the Geordies’ recent history.

‘Or Ashley would have woken up on Monday morning and cleared the decks, sacked Bruce, and lanced the discontent among Newcastle players that is poisoning the training ground.

‘Instead, Ashley stood behind Bruce, admired his “passion” and experience… despite the rest of the world seeing he’s well past his sell-by date.

‘Sometimes I praise owners for giving a head coach time, but not after seeing what has unfolded at St James’ Park since mid-December.

‘He’s got a squad who don’t believe in him, and who downed tools at the weekend, showing no fighting spirit or pride. Totally directionless.’