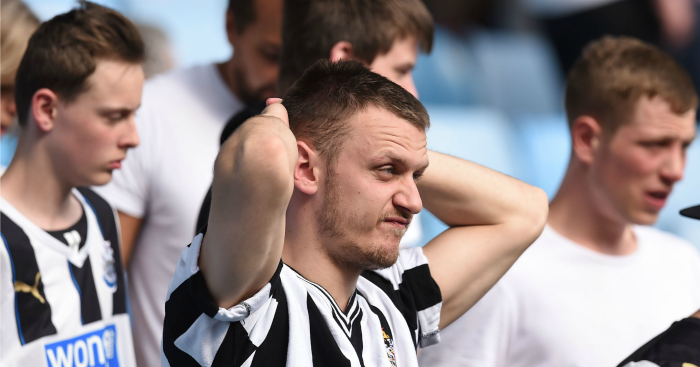 Within 20 minutes of Newcastle’s relegation, managing director Lee Charnley had issued a statement on behalf of the club:

‘Tonight we are devastated at our relegation from the Premier League, as I know every single person connected to this football club will be.
I want to thank all of the fans for the support you have shown for the Club you love throughout the season, in spite of this massive disappointment and underachievement.

‘Your support throughout has been magnificent, but I want to pay particular thanks for the incredible backing you have given to Rafa and the team during the latter part of the season. Nothing more could be asked of you and I am truly sorry we have not given you the outcome you deserve.

‘I also want to thank every single member of staff here. This Club is their livelihood, but they are fans too. To go through the threat of relegation last season and then to suffer a worse fate this time around has been very hard for them. I know that each and every one of them has done whatever they could to help us out of the situation we now find ourselves in.

‘We know that supporters want to know what the future holds and will want to hear more from us as soon as possible. The process of scrutinising what went wrong and planning for what is to come has already begun.

‘Right now, of course, Rafa and the team must prepare for the final game of the season but after that, please rest assured we will communicate more fully with supporters.’

Unfortunately for Charnley, not only have supporters heard all this sh*t before, but they hold him as one of the principal culprits for the club’s relegation. While Mike Ashley has indeed allowed managers to invest in players, he is also responsible for the toxic feeling around the club which makes progress in any circumstances so tough. Charnley is the one responsible for appointing the managers. And yes, that means John Carver and Steve McClaren.

One of the first to speak his mind was Kevin Keegan, even before relegation had been confirmed:

“You have to say Mike Ashley hasn’t handled the decision-making very well or he’s given the responsibility to people and they haven’t handled it very well,” Keegan said to BBC Sport. “You make mistakes in football and you get punished, especially the Premier League now. It is mismanagement from the very top.

“They bought players for the future but sometimes maybe you have to buy players for the present. It’s all right having a few good young players from France but can they play in the Premier League now? If they can’t – don’t buy them or certainly don’t play them. A few of them have found it very tough and the confidence goes and then even good players start to look pretty poor.”

Alan Shearer also had his say, this time via Twitter:

You can't pretend it hadn't been coming. @NUFC not learned lessons from 2009. Hard as it is for me to say, well done Sam and @SunderlandAFC

Former Newcastle defender Warren Barton was on Sky Sports News, and had some harsh words for the club’s players:

“It wasn’t just this season, it started happening a couple of years ago with the players coming in. Andros Townsend looks a good player but other than him I don’t think there’s anyone else, for me, to still be at the club.

“They won’t care, they get in their cars and drive off. You can tell by the body language throughout the season. I hope Rafa stays, but if he doesn’t it tells you a bit about him as well. It’s time to clear the decks, regroup, refocus and go forward because we need to bounce back straight away.”

“I think the big mistake is Lee Charnley, he gave the job to Steve McClaren. OK, it didn’t work out. But I think the fact he made that decision and he waited too long – he didn’t want to admit his mistake.

“They spent as much money as anyone in Europe in January. Rafa Benitez hasn’t had long enough to turn it around, if he had done they wouldn’t be in this situation.”

The city’s local newspaper the Newcastle Chronicle also went in hard in the form of a cutting front page against Charnley’s tenure. The paper’s editor tweeted that fan opinion had led them to decide on a hard-hitting cover, and stayed true to that word:

It seems the Chronicle has changed their front page. Lee Charnley now has two jobs, not one. #nufc pic.twitter.com/pP5yFg78Ku

However, there is no better place and no better person to finish than Faustino Asprilla, who let rip at the club in an interview with the Chronicle. Give him a microphone and he will talk:

“Newcastle United have been very poor this season, and for me the problems started with the owner with his failure to invest in consecutive transfer windows, then the board who appointed Steve McClaren.

“He was never going to be able to handle such a big club. The board were also to blame for wasting the money that Mike Ashley gave them.

“Players such as Mitrovic and Thauvin have just not been good enough. Leicester City’s team who have won the title cost as much as those two players. It is a joke.”