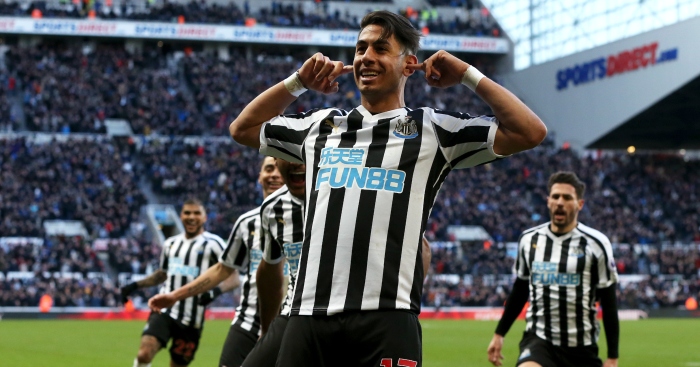 “Maybe it is my personality, I don’t talk too much or complain too much. I always try to keep going. In the end that always pays off,” said Ayoze Perez in November after finally scoring his first Premier League goal of the season. Last season’s top goalscorer (though his total of ten was the lowest since Michael Owen top-scored in Newcastle’s relegation season a decade ago) had been struggling, losing his place to Yoshinori Muto as Newcastle had plummeted to the very bottom of the Premier League. “It hasn’t been an amazing time for myself,” admitted Perez with typical humility.

Fast-forward just four months and Newcastle are in 13th after recording the sixth-best Premier League form of 2019, Perez has now scored seven goals and his sumptuous assist for Salomon Rondon’s strike against Everton prompted the customary ‘if that had been Lionel Messi…’ purring from manager Rafa Benitez. And yet Perez still splits Newcastle fans, who have watched the Spaniard alternate between inspiring and infuriating for almost five years. When it comes to Ayoze Perez, familiarity has bred contempt among some supporters. Their jeers are the reason his trademark celebration involves pushing his fingers into his ears.

Ayoze Perez has been knocking them in for #NUFC since the 2014/15 season – that’s half a decade of committed service to the club.

Time to finally get off his back?

“I can understand sometimes the fans when he is giving the ball away,” says Benitez. “He can miss an easy pass, but after he can score a great goal. He’s someone that you need to manage and he is doing well.”

The manager knows that players of Perez’s supreme skill can frustrate, especially in games when you are ceding the majority of possession and every lost ball feels like a waste of a rare opportunity. But with Newcastle now playing with far more confidence – particularly at St. James’ – Perez looks like a man released. In a run of five home victories, Perez has scored four goals.

It is this kind of form that has previously prompted links with Manchester United, Arsenal and Tottenham; it’s fair to say that if Perez could ever sustain this kind of impact over a whole season, he would not be close to the end of his fifth season at the club. Of Newcastle’s core first-teamers, only Paul Dummett has been at the club longer. Keeping that in mind, it seems impossible that Perez is still only 25 and only just reaching his peak years as a footballer. But even if he were to leave tomorrow, without another Newcastle goal to his name, he should still be regarded as one of the greatest bargains of this decade. At just £1.5m, he has re-paid his transfer fee in precious goals three or four times over.

Newcastle is awash with cheap heroes – Fabian Schar has been a revelation and Isaac Hayden has emerged from the shadows to become a surprisingly stubborn presence in midfield – but Perez is the silk that complements the steel. And it really is astonishing that a player who chose Newcastle over Real Madrid, Roma and Porto back in 2014 is still actually there. Certainly, nobody expected him to remain after relegation from the Premier League.

“Despite interest from big clubs to sign me, I have a debt to Newcastle fans. I want to return to the Premier League with Newcastle,” he said in 2016. The message has always been the same: he is forever indebted to the club who took a chance on the boy from Tenerife.

Ayoze Perez must be the most under rated Premier League forward of the last 5 years. Not a huge number of goals (but who has for Newcastle?) but is a clever, busy and classy player.

The irony is that Perez will probably only be truly loved when he leaves Newcastle, when his ten goals for a struggling, defensive side become 15 goals for a more attacking team where he is surrounded by better players. Those who decry his record need to remember that he has been playing in forward lines with Joselu, Dwight Gayle and Daryl Murphy; he has looked like a different player alongside Rondon (who he describes as a “great goalscorer”) and Miguel Almiron in a forward-thinking Newcastle side.

“Every person has their own opinion and I respect that. Not everybody is going to like you,” says the man himself. No, but Perez has done enough in almost five years of loyal service to at least demand that everybody respects him.