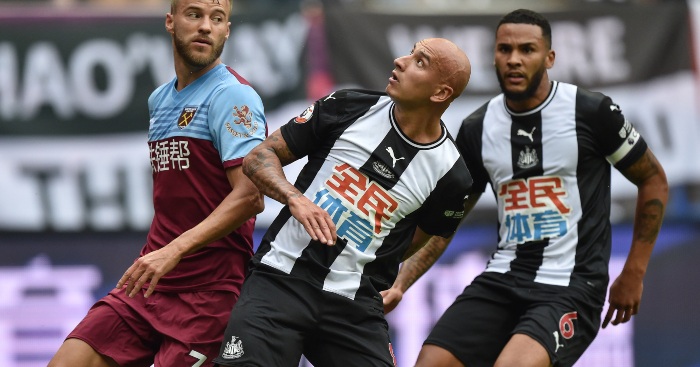 Jonjo Shelvey has urged Newcastle supporters and the media to ‘move on’ from Rafa Benitez and give Steve Bruce time to make an impact on the Magpies.

Bruce was appointed this week to replace Benitez who left St James’ Park upon the expiry of his contract at the start of the month.

The new boss was in Shanghai to watch his new team beat West Ham 1-0 to earn their first win of pre-season in the Premier League Asia Trophy.

Bruce gave Shelvey a central role against the Hammers and the midfielder is hoping to retain the position when the season starts against Arsenal in three weeks.

Shelvey also explained why he believes a change of management will benefit Newcastle.

“I think the change of manager could be a good thing,” he told Sky Sports. “For me personally, I probably needed that change and trying to get into Steve’s plans.

“I understand the fans are disappointed. We had three great seasons under Rafa but it wasn’t to be and I think we’ve all got to move on. If we put in performances like that, week in and week out in the Premier League they can have no problem with it.

“Steve is a lot different to Rafa. You never knew what Rafa was thinking. His record speaks for itself and he probably didn’t need to talk to you and tell you what he’s thinking but personally as a player I’d rather have someone who talks to you and you know what he’s thinking. That’s not knocking Rafa because he was a terrific, terrific manager but for me personally (it’s better).

“Rafa’s gone now and the club has moved on and everyone as a whole – the press included – need to move on and give this man some time.

“I hope it’s going to a big role for me now. I enjoy playing in that role. I found out yesterday I was playing in that position and it suits me, I can get on the ball a bit more where I’m a bit deeper than the other two midfielders and I can play the passes I like to play.”