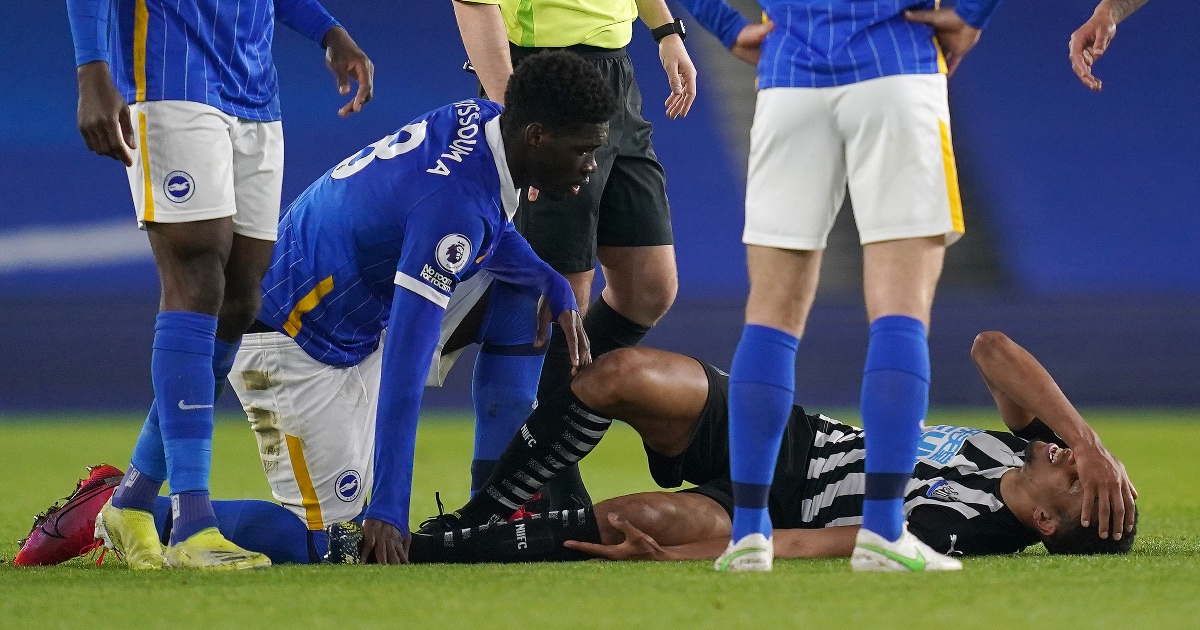 Newcastle midfielder Isaac Hayden will miss their relegation run-in after picking up a serious knee injury.

The Englishman had to be subbed off during the 3-0 defeat to Brighton on Saturday.

A challenge with Seagulls midfielder Yves Bissouma saw him carried off on a stretcher in the first half.

Newcastle have revealed that he suffered ‘significant’ knee damage which will rule him out for the remainder of the campaign.

Hayden doesn’t require surgery, meaning he will now begin an extensive rehabilitation schedule with the club.

They’re confident that the 26-year-old will return in time for the start of next season.

Speaking about the injury, Hayden tweeted: “Gutted all round is an understatement! I will be doing my utmost to recover as quickly as I can from this injury to help the team.

“Respect to Bissouma for checking on me after the game – [it] was a complete accident – and Brighton medical staff for their help also.”

It remains to be seen whether his next match will be in the Premier League or Championship. The Magpies are embroiled in a relegation clash with the likes of Burnley, Brighton and Fulham.

Steve Bruce’s side are 17th in the table after 29 matches. They’re two points ahead of Fulham with a game in hand.

However, their recent form is a major cause for concern which will only be worsened by the injury to Hayden. They could’ve given themselves a big boost with a win against Brighton but instead conceded three with no reply.

The Magpies’ situation is made more daunting by the recent resurgence of Fulham. They’ve picked up wins against Liverpool and Everton to give themselves a good chance of leapfrogging Newcastle.

Speaking about the relegation fight last week, Bruce said: “We’ve got to show the same attitude and hopefully big players are back around the corner. That gives us something to focus on and I’m still convinced we’ll be okay.

“There is no question managing Newcastle is always difficult. There’s a huge spotlight and that’s the way it should be. I’m ready for the challenge and my experience I hope will prove vital.”