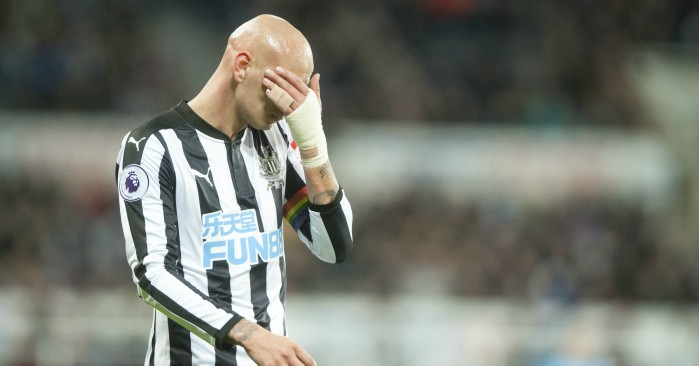 Newcastle boss Rafael Benitez will anxiously await the results of a scan on Jonjo Shelvey’s knee this week after the midfielder suffered an injury at Bournemouth.

The Magpies have confirmed that the 26-year-old, who has produced some of his best form for the club in recent weeks, was hurt during Saturday’s 2-2 Premier League draw at the Vitality Stadium.

A statement released on the club’s website read: “Jonjo Shelvey suffered a knee injury during Saturday’s draw at AFC Bournemouth. The midfielder will be further assessed and scanned this week.”

Shelvey, a £12million signing from Swansea in January 2016, has made 23 appearances for the club to date this season and was a central figure in their 1-0 win over Manchester United on February 11.

He has endured a testing time at St James’ Park to date, serving a five-match ban last season after being found guilty of racially abusing Wolves midfielder Romain Saiss – a charge he strongly denied – and being sent off twice this term.

Shelvey, who has consulted a psychologist over his anger issues, has risen to the fore as Newcastle have stepped up their bid to keep themselves out of the Premier League’s bottom three.

Benitez will hope there is no lasting damage, with fellow midfielder Matt Ritchie battling illness ahead of Saturday’s trip to high-flying Liverpool.

The Magpies, who made loan moves for goalkeeper Martin Dubravka, winger Kenedy and striker Islam Slimani in January, went into Saturday’s game with only full-back Jesus Gamez and Slimani unavailable and the Spaniard will be desperate for that casualty list to remain as short as possible as the run-in approaches.