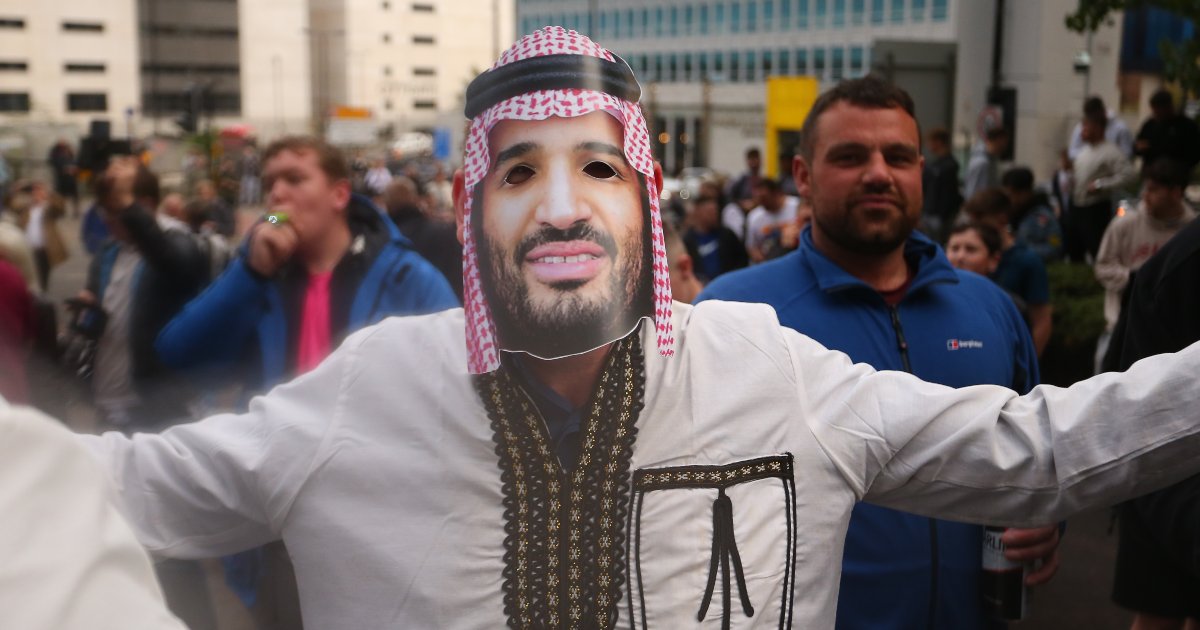 Watching the daft lads dancing outside St James’ Park with tea towels on their heads, not giving a damn about the nature of their new owners, may make many despair.

There is obviously no separation between PIF and the Saudi state, despite the Premier League’s fatuous ‘legally binding assurances’. It’s a bloody disgrace that the Premier League allowed it, but it is just the latest bloody disgrace they’ve allowed, isn’t it? And to expect the typical half-naked tea-towel-headed Toon Army member, loaded on lager and self-identity, after a lifetime living in a room full of mirrors, to be cognisant of the politics of the Middle East and be at the spearhead of moral outrage about it, when all of our lives are interwoven with basically the same money that is buying NUFC is, to say the least, unrealistic. They always have the charge of hypocrisy locked and loaded at any critics.

Even so, being able to turn a blind eye to PIF as a £3.5 billion, 5% investor in Uber is one thing as you call a lift home; being able to do it when they’ve bought your football club requires another scale of denial altogether.

So why don’t they care? They say they shouldn’t have to care. Saying it’s not their fault their club has been sold to this heinous regime is 100% true, but celebrating the fact with gusto absolutely is their choice. We can discount a few fans as nasty and stupid, but they’re not all bad people with no conscience.

But I think I know why they can overlook these issues and just get the cans in. It’s why all of us overlook so many issues we should care more about but simply don’t.

First, we’ve been trained to respond positively to Big Money like good little hypnotised dogs. We wag our tail and do what the rich want if we’re allowed to touch the coat-tails of their wealth in some way. We are easily bought off, in football especially so.

Second, other clubs are owned and run by people and organisations as bad, or nearly as bad as PIF, so that wound is already cut and cut very deep. If they can be, why can’t Newcastle? When everything in the swimming pool of life is already polluted with a million shits, what does one more turd in the water matter?

Third, we are powerless about so much in our lives, pushed from pillar to post by the winds of change blown by the power of Big Money and so your club being bought by Saudi Arabia just feels like another one of those distant decisions, made by people we’ll never meet, who live a life profoundly removed from our own. So removed it feels almost like fiction.

As David Goldblatt has said: “There is an entire industry, overwhelmingly in London and the south-east, that has grown grotesquely wealthy on servicing the political and economic needs of the Gulf’s ruling families, and oligarchs and dynasties everywhere. From the banks that launder stolen money, to the accountants that then hide it; from the lawyers who resolve tricky domestic affairs to the PR firms mopping up the damage afterwards, and the estate agents that arrange to store your wealth in London’s empty residential skyscrapers.” Against all this, being a fan of NUFC and just wanting to see some decent football feels tiny and insignificant.

Six things the new owners need to do at Newcastle United

We are also governed by people who sell arms to Saudi Arabia and are thus scared to criticise the regime. Our country has been involved in all sorts of dubious, even illegal wars which killed thousands. Our whole industrial economy was founded on the riches of bloody empire, whose royal family and others made themselves wealthy off the sweat, blood and death of colonised people. It’s not that long since we chemically castrated gay men in this land, and some Tories promulgated Section 28 with much fervour into the 21st century. And that’s just for starters.

So NUFC fans don’t have the domestic crisp white sheets of moral purity against which to hold this bloody regime to account. In life, there’s always a get-out clause if we look hard enough for one.

Next, we must realise that important local assets being owned by hostile foreign governments is commonplace. The government has long since sold off much of the infrastructure of the country to foreign capital. Take back control? Aye, right. We have taken Chinese money to build nuclear power stations, we are reliant on Russia for gas. On NUFC’s doorstep Northern Gas Networks Limited and Northumbrian Water Group are owned by the Hong Kong-based CK Infrastructure Holdings, the chairman of which, Victor Li, is a member of the Standing Committee of the 13th National Committee of the Chinese People’s Political Consultative Conference. Geordies are drinking oppressive Communist water and burning undemocratic Communist gas. The country is in lockstep with oppressive regimes already. Newcastle United is just following this trend in ownership.

Once we accept that we’re powerless and are basically having the pish taken out of us by the rich and powerful for their own nefarious purposes, then wherever the money comes from to buy your club doesn’t matter. Everything in the country is up for sale to the highest bidder, or to the mates of someone in power, regardless of who they are. Why not NUFC?

More broadly, it often feels like nothing matters anymore. The Prime Minister lies every time it opens its meat hole, creating permanent cognitive dissonance between reality and the fictions. Ministers are out-of-their-depth stupids who think they’re clever. Result? The country is coming apart at the seams every day. We have slid into a normalised dystopia. Saudi buying Newcastle is just another part of it.

It’s easy to see why Ashley was hated and with good reason. However, many other clubs would think 26 seasons in the top flight in the last 28 (10 of the last 12) would’ve been a great achievement and they would have loved to win two Championships. Ashley may have been a hobgoblin but as Barney Ronay put it so succinctly, it’s a case of ‘infuriating tracksuit vendor v blood-stained dictatorship. Zero-hours sport-shop contracts v beheading 37 people in a single day. Hiring Dennis Wise v bombing Yemen’. But somehow, these comparisons hold no power when put against money and football. Ashley became so hated that anything seemed better.

How long will this positivity towards the new owners last though? From Gordon McKeag to Sir John Hall, Freddie Shepherd and Mike Ashley, there have been protests to oust all of them. Some even booed Bobby Robson. So will it be long before they’ve been let down again by another owner and manager who didn’t match their ambitions? Grotesque wealth leads to entitlement, entitlement to defensiveness, defensiveness to a restless discontent and a feeling that nothing is quite as good as it should be and an urge to blame someone else for this dissatisfaction. Maybe God is trying to tell us something. If so, the Premier League isn’t listening; it’s already on a Zoom call with the devil.

Let’s face facts, football fans are just pawns in these rich people’s games to help wash away all their blood stains. While some of us might want to fight for a better football world not populated by all these greedy and immoral bastards that own so many of our clubs, the truth is, it’s a fight long lost in the Premier League. Newcastle fans have just accepted it. Should we take against them for that? Haven’t we all done likewise about one issue or another when it suits us? Once players cross the white line, somehow, it all fades away for 90 minutes.

The Premier League is little more than a gold septic tank for decency and morality. It has driven football in a spirit of blinkered greed. This takeover has just illustrated the absolutely desperate, amoral, nihilistic black hole we are living in, populated with devils, demons and dummies, out of which there seems no escape. Rather, it is dragging us all down into its cesspool.

The answer is a revolution, but we’re too exhausted just by surviving inside this extremism.

So. pass those cans, kidda, I’ll have a drink with you, because suddenly, I’m very fucking thirsty.