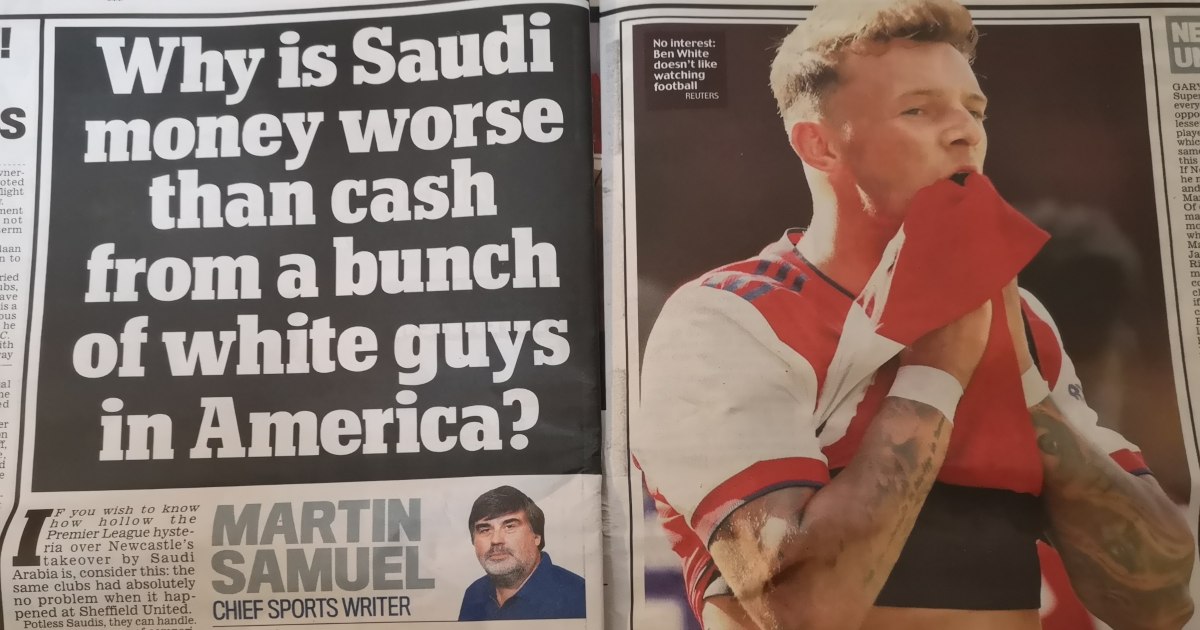 The Newcastle United takeover objections stem from racism, according to Martin Samuel of the Mail…

There is a very quick four-word answer to Martin Samuel’s question ‘Why is Saudi money worse than cash from a bunch of white guys in America?’ in the Daily Mail…

‘Because of the killings.’

…but such a ludicrous question – asked several times over a long article liberally littered with whataboutery – deserves a much longer answer. But keep in mind ‘because of the killings’ because that is important.

‘If you wish to know how hollow the Premier League hysteria over Newcastle’s takeover by Saudi Arabia is, consider this: the same clubs had absolutely no problem when it happened at Sheffield United.’

It’s a strong start in which Samuel has immediately compared one thing with something else entirely different.

Don’t just trust us, listen to Kate Allen, Director of Amnesty International UK, who literally said the cases of Newcastle and Sheffield United were “very different”.

And why are they “very different”? Because the Newcastle deal basically gives ownership to the sovereign wealth fund of the Saudi state – which has a terrible human rights record – while Prince Abdullah is a private businessman who has a masters in engineering and is largely concerned with the manufacture of paper products.

‘Prince Abdullah is known for his love of reading and American football. He is a fan of San Francisco 49ers. During the annual football season, he watches the games with friends every Sunday.’

Does it sound like Prince Abdullah – one of many thousands of members of the royal family in Saudi Arabia – is exactly the same as Mohammed bin Salman?

We’re now over 400 words into Mediawatch and we have only covered the headline and opening line of Samuel’s piece so we may have to skip along a little quicker.

‘Potless Saudis, they can handle.’

No, Saudis not linked to the systematic repression and killing of human rights activists, dissidents and journalists, they can handle.

‘Nor do the Premier League’s principled band mind rubbing along with autocratic regimes, given that in 2017 Manchester United agreed a strategic partnership with Saudi Arabia’s government-backed General Sports Authority.’

Now this is fair comment, though taking money from the Saudi Arabian government is definitely further down the list of crimes against humanity than being entirely owned by the Saudi Arabian government. And the fact that nobody really knew about that Manchester United deal before the whataboutery began in earnest last week proves that this particular attempt at sportswashing has been really quite unsuccessful.

‘It is fine for Manchester United to use it as a revenue stream, but not for Newcastle, who are owned by the Public Investment Fund of Saudi Arabia.’

Not fine, no, but considerably more ‘fine’ than being owned by a country that has a horrendous record in human rights. Because of the killings.

‘After all, there’s a lot of shady stuff going on, such as 19 clubs in a 20-club league, meeting to discuss how to place limitations on the excluded one. That’s running a cartel. Business experts, not to mention judges, tend to frown on it, which is why Newcastle are taking legal advice.’

Well, they didn’t meet to discuss how to place limitations on Newcastle, did they? They had a call with the Premier League at which Richard Masters explained their decision to wave through the takeover.

As Craig Hope and Mike Keegan wrote in the Daily Mail itself: ‘There were raised eyebrows that Newcastle had not been invited onto the call, although the point was made that an open conversation would have been difficult had they been present.’

‘Meanwhile, Kick It Out are troubled by a few excitable Geordies with tea towels on their heads, when the real racism is coming from the top. Oil money, Gulf states, petrodollars, you know the lingo by now.’

Now this is excellent. Is Samuel really claiming that any fuss about Newcastle United’s takeover comes from ‘racism’ and that Kick It Out should be more concerned about prejudice towards murderous regimes than the cultural appropriation of the Geordie fans?

But Samuel has form here; he once wrote that John Terry calling Anton Ferdinand a ‘f***ing black c***’ was ‘ultimately meaningless’ because it was made for private consumption. So if you ever want a definition for harmful racism, ask this particular middle-aged white man.

‘Why is investment from one part of the world seen as less preferable to a bunch of white guys from Florida or Boston?’

Because of the killings.

‘It reminds of the time when UEFA sanctioned Manchester City and Paris Saint-Germain, then didn’t even bother to differentiate between their cases. They both received fines of £50 million without any pretence of distinction because, let’s face it, all these towelheads are the same so why bother to assess differing business models?’

Yes, that is exactly what happened, Martin. And they definitely were not two of nine clubs punished by UEFA on exactly the same day in May 2014 for similar breaches of FFP.

‘Premier League legislation being drawn up by panicking executives, and those who fear displacement, is directly aimed at one sort of owner, one sort of investor, from one part of the world.

‘If Kick It Out are serious about rooting out racism around Newcastle, they should return their Premier League funding and just call it what it is.’

Not even sure where to start with this, but a white man telling Kick It Out how to fight racism is really not a great look. Especially when that white man thinks vile racist abuse – when just between two men – is ‘ultimately meaningless’.

Samuel then goes down a long, long road – via Uber and Deliveroo – to argue that Newcastle United’s new owners should be able to put whatever value they choose on the sponsorship of the shirts. It’s bollocks but we have run out of steam now so we will ignore that particular bollocks and concentrate on the final paragraphs:

‘If we treat business issues as separate to human rights, the PIF of Saudi Arabia is a proper investment group with interests in General Electric, Lockheed Martin, Live Nation, Facebook, Disney, Boeing, Citigroup, BP and Uber.

‘Yet the Premier League clubs instinctively treat them like crooks. Maybe that’s why they need the white folk to front this up. Makes it respectable.’