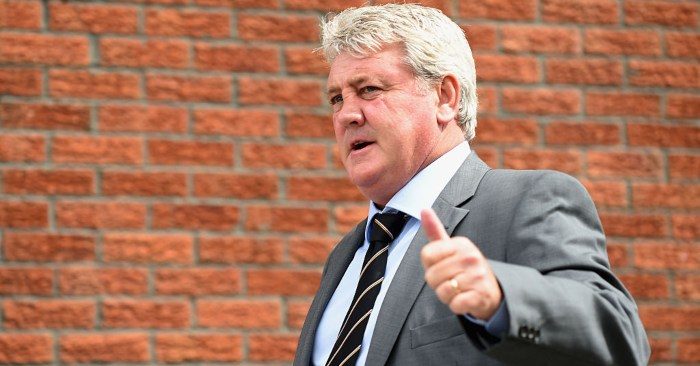 It is 15 days since Newcastle announced the imminent departure of Rafa Benitez as their manager. Just over a fortnight has passed and the club are seemingly no closer to appointing a replacement.

Another horse fell in this infernal race on Tuesday. The Newcastle Chronicle said Giovani van Bronckhorst was ‘not in contention’ to take over as the Magpies ‘were ideally looking for someone with experience of coaching in the Premier League’. They do not want someone ‘who will be learning about the Premier League on the job’, but ‘a working up-to-date knowledge of the English top flight’.

With Alan Pardew waiting for the phone call from Barcelona, we are no closer to discovering the identity of Newcastle’s 16th permanent Premier League manager. Let’s take a look at the five leading candidates, at least in terms of bookmakers’ odds, and their pros and cons.

The link: Described as ‘the early frontrunner’ by Luke Edwards of the Daily Telegraph as early as June 24, Bruce was said to be ‘admired by those close’ to Mike Ashley, with ‘the ideal personality to work with the owner’. By July 9, Keith Downie of Sky Sports went as far as to say that he was ‘one of the names under consideration’.

What he’s said: “I never take any notice of all that sort of speculation or tittle-tattle because the way the newspapers are today, no disrespect, I think there have been 150 managers associated with Newcastle. I would suppose I’m going to be one of them.”

The pros:
Premier League experience, to the tune of 392 matches as a manager and three titles as a player.
Boyhood Newcastle fan who once admitted to having “crawled under the turnstiles” at St James’ Park “to get in to try and save a bob or whatever it was”.
Has only ever spent £10m or more on four players – Asamoah Gyan (£13.1m), Michael Turner (£12m), Abel Hernandez (£10m) and Darren Bent (£10m).
Holds the record for most promotions to the Premier League (four), so would be the perfect man to guide them back up after taking them down.
Is a fantastic author.

Cons:
Premier League experience, to the tune of relegations with both Birmingham and Hull City; he has never managed in the same division as Pep Guardiola.
Would require a compensation payment to prise him from Sheffield Wednesday.
Was Sunderland manager (but has also been in charge of both Sheffield clubs, as well as Aston Villa and Birmingham).
Once had a cabbage thrown at him.
Is Steve Bruce.

The verdict
That his biggest advocate is Paul Ince invites all sorts of questions. That he has not achieved Premier League survival since 2014 is cause for concern. That it would be the biggest job of his storied managerial career is a poorer reflection of Newcastle than it is testament to his own ability. Yet his is the sort of debatable top-flight experience – and relatively cheap services – that Ashley is likely to pursue.

The link: Was installed as the early bookmakers’ favourite when the Benitez news was announced, with David Ornstein stating that there had been ‘no contact as yet’ with the Spaniard. That was on June 24, with the only update vaguely resembling an official response since coming from the Newcastle Chronicle, who rather unsurprisingly said Manchester City ‘would not welcome any move’ for their assistant manager.

What he’s said: Not an awful lot. June 12 brought the following: “With Guardiola, it is a daily challenge. He is super-efficient with himself, and those around him should always be seeking improvements, evolutions.” But leaving the Premier League champions for Newcastle does not really feel like ‘improvement’ or ‘evolution’.

The pros:
Young, highly-rated coach who has been in the Premier League in some capacity since 2005.
Has already started to show the sort of tactical acumen that is broadened by working with Pep Guardiola on a daily basis.
Could attract a Spanish contingent or benefit from Manchester City relationship in the transfer market.
Would be cheaper than some – although not all – options.
Immaculate hair.

The cons:
An inexperienced gamble.
Would be poached within a season at most if he is anything close to a success.
Is only four years older than Rob Elliot, who would cost considerably less.
Has grown used to working with Kevin de Bruyne and Sergio Aguero, not Jonjo Shelvey and Joselu.
Has a name that could prove troublesome for a Geordie accent.

The verdict
He would surely be advised against it by Guardiola, Arsene Wenger and anyone else of sound mind. One does not jump a thriving ship with a happy crew who are preparing you to become captain for a vessel that could sink at any moment’s notice. Steer clear, fella.

The link: Darren Bent was “pretty much convinced they will have contacted him to say what do you think about this job” on Sunday evening which seemingly prompted some bookmakers to install him as second favourite for the post by Monday night.

What he’s said: Nothing about Newcastle, per se, but May brought the suggestion that “I’ve got a great teacher in Dean [Smith, the manager], and Richard [O’Kelly, the assistant coach] as well, to bounce things off”. He also claimed that he was “starting right from the very bottom” by being appointed as the assistant at a former European Cup-winning sleeping giant without his full coaching qualifications.

The pros:
Knows the Premier League like the back of Frank Lampard’s hand.
Can call upon the experience and knowledge of Dean Smith.
Has spent much of his playing career learning from Jose Mourinho, Sven-Göran Eriksson, Fabio Capello, Guus Hiddink, Carlo Ancelotti, Rafael Benitez and Avram Grant.
Would surely be given a few of Chelsea’s hand-me-downs.
Very good at pointing and shouting.

The cons:
An even more inexperienced gamble.
Would also be poached within a season at most if he is anything close to a success.
Would necessitate an official name change to ‘John Terry’s Newcastle’ until he leaves.
Would refuse to manage against Chelsea.
Would demand applause in the 26th minute of every game.

The verdict
It is incredibly easy to picture him laughing as loudly as possible at one of Ashley’s jokes as he pats him on the back and calls him ‘Big Mike’. But it feels far too soon for him to undertake such a task, far too unlikely that he would leave Aston Villa less than a year into his supposed apprenticeship, and beyond even Newcastle to entrust their future with another assistant manager by trade. The memories of John “I still think I’m the best coach in the Premier League” Carver linger.

The link: A Daily Mirror exclusive from June 1 stated that Sheikh Khaled bin Zayed Al Nahyan, the man behind Newcastle’s protracted takeover, wanted either Mourinho or Wenger to replace Benitez as manager. It has pretty much snowballed from there, much of which has been due to his relationship with former mentor and St James’ Park hero Sir Bobby Robson.

What he’s said: Absolutely everything (but actually nothing).

The pros:
Has won a few trophies down the years.
Is one of the greatest ever Premier League managers, if not one of the modern era’s best overall.
Could likely weaponise the entire city if his siege mentality technique works.
Would make a point of either playing Sean Longstaff, inadvertently aiding his development, or reinvesting all of the proceeds of his sale.
It would be bloody hilarious.

The cons:
Likely to demand a wage that would quickly negate the benefit of him being a free agent.
Tends to need a bigger transfer budget than £50 and a Sports Direct mug.
Liable to offer at least one relatively popular player as a sacrifice to the footballing gods.
Has never taken over a club that finished lower than 5th the previous season.
Has never won at St James’ Park.

The verdict
Considering how many toys were extricated from prams because Manchester United wouldn’t sanction signing a centre-half for £50m or more, it would be genuinely fascinating to see Mourinho wrestle with Newcastle’s budget. That is unfortunately sure to outweigh any affection he has for the club and its fans.

The link: The Daily Telegraph named him as one of several candidates Newcastle were ‘considering’ on July 5, with Matt Law claiming that the Magpies ‘have been gathering information’ on the Spaniard as if it were the shiniest of trinkets.

The pros:
Solitary season at Watford established him as a lite version of the excellent Javi Gracia, guiding the Hornets to 13th and the FA Cup semi-finals.
Is a free agent after leaving Shanghai Shenhua earlier this month.
Named Premier League Manager of the Month more recently than both Mourinho and Wenger.
Oversaw the arrivals of Abdoulaye Doucoure, Etienne Capoue and Jose Holebas for a combined £16.4m – although none came close to their best Watford form under him.
Is a Europa League-winning Spaniard who started his managerial career in Real Madrid’s system, and has coached Valencia and in the Chinese Super League; how could Newcastle waste that kind of opportunity?

The cons:
Has lasted two full seasons or more at just one of his ten clubs.
Might struggle with the inevitable drop in wages after his Chinese sojourn.
Left Watford because they didn’t provide him with “the necessary conditions”, which sounds awfully familiar.
Reached the semi-finals of the FA Cup knowing full well Ashley makes fun of anyone who takes that competition seriously.
Could confuse everyone by looking like Hugh Laurie’s Spanish brother.

The verdict
This might be the one. He has Premier League experience, however limited. He has won a major European trophy, however long ago. But most of all – yeah, most of all – he is available for absolutely nothing on what would surely not be outlandish wages.