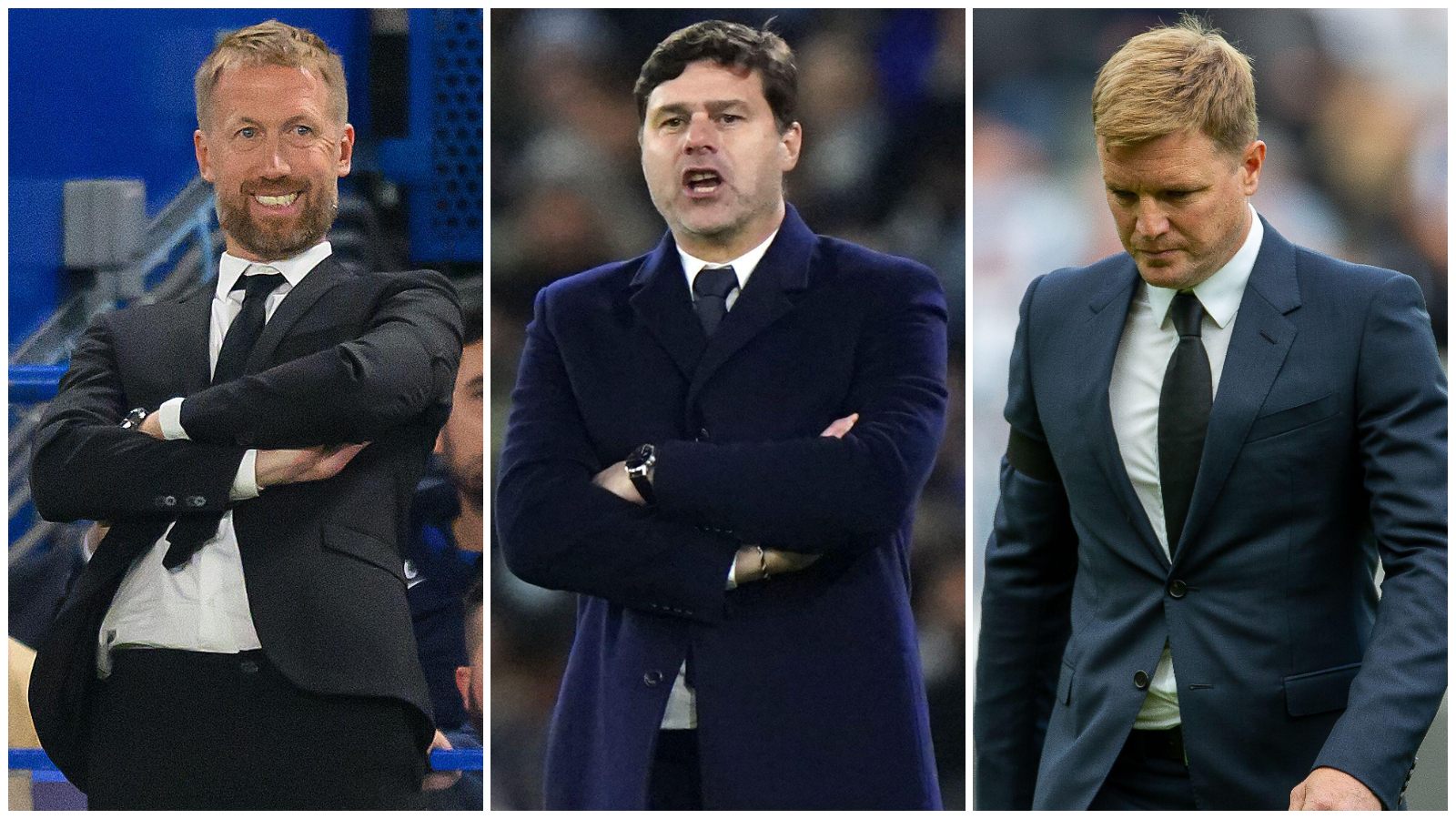 So you want Gareth Southgate sacked… who next? Really, who? We’ve assessed why the candidates might be the next England manager, and why they wouldn’t.

Here are the five favourites – well, four of them and Brendan Rodgers – and how well placed they might be to boss the Three Lions…

Graham Potter
Why he might: He won’t. It’s downright odd that he’s the favourite…

Why he wouldn’t: He’s one game into a massive new job after walking away from a position where he was extremely comfortable and secure. It would take a truly catastrophic start to his Chelsea reign to make him available in any way to the FA. Potter might one day manage England, but he has plenty of time ahead of him. Making a decent fist of his turn to manage Chelsea might just enhance his credentials when the manager who replaces Southgate himself needs replacing.

Eddie Howe
Why he might: As things stand, compared to Potter, there is a greater possibility of Howe being available in the short term. Despite the anticipation around St James’ Park during the Saudi owners’ first summer at the helm, Newcastle’s season has got off to an underwhelming start. No one is quite sure where the expectations of the Magpies lie this season, but we’re damned sure it’s more than tenth after a string of draws.

A shimmy into the England job may be a convenient way for Howe and Newcastle to part. Howe wasn’t the the new owners’ first choice when he was appointed and, while they have been impressed with what he has done so far, they may be very happy to take the opportunity to hire someone with a higher profile. And Howe has spoken before of how highly he regards the Three Lions role: “The England job is the ultimate job,” he said in 2016 when a replacement for Sam Allardyce was being sought. “I’m not interested in the job now. Who knows that happens in the future.”

Why he wouldn’t: Like Potter, Howe is already in a fantastic job at a prestigious, ambitious club with vast room to grow and owners richer than God. If the board are content with him, it would be a brave move to walk away, regardless of the pull he feels towards England.

The noises coming from the owners have been generally positive. Amanda Staveley said she’d “love Eddie to be the next Sir Alex Ferguson”. But she and they are unlikely to say anything else while they are still paying his wages. Importantly, though, the Toon Army remains firmly behind Howe, even if they are generally non-plussed with what they have seen from the Magpies this season.

Mauricio Pochettino
Why he might: Pochettino is kicking his heels waiting for his next job, though his options are perhaps not as grand as they once were. The England job could appear rather more attractive in comparison to other potential positions.

Many people would prefer the England manager to be English or British but appointing Pochettino would not be like airlifting Sven-Goran Eriksson or Fabio Capello in to look after the national team. Pochettino, viewed as a progressive manager, worked in the Premier League for almost seven years and is very much at home here. Indeed, his family remained in London when he lived out of a suitcase in Paris during his spell in charge at PSG.

Pochettino has also put on the record his willingness to boss England: “If I were to move into international management one day, I’d relish the opportunity to coach the England national team,” he wrote in his book, A Brave New World. “I’d be reunited with loads of familiar faces: Harry Kane, Danny Rose, Dele Alli, Eric Dier, Adam Lallana.” One or two, perhaps.

Why he wouldn’t: Especially after being sacked by PSG, Pochettino may feel he has too much unfinished business at club level.

The England job may well be available at the turn of the year, by which time, a number of club positions may have become vacant. Perhaps only Thomas Tuchel is more attractive of the managers currently available. Pochettino will still attract numerous offers, especially as the season progresses and chairmen really start to panic.

Pochettino may also feel that he would struggle to affect young players and impose his style on a team he so rarely sees. Though the first of those factors hasn’t stopped Southgate and it didn’t bother Pochettino when he wrote his book in 2017.

Steve Cooper
Why he might: The Nottingham Forest boss already has a strong body of work with the FA. He has coached England’s youth sides, winning the Under-17s World Cup in 2017 after reaching the Under-17s European Championships final. At the World Cup, Cooper got the best out of Phil Foden and Jadon Sancho, while four of the other players in that triumphant squad have graduated to the senior squad.

Cooper also made a positive impression in 2018 when he was tasked with following Colombia at the World Cup. When England were due to face them, Cooper flew to Russia and gave an ‘incredible’ presentation to Southgate on England’s last-16 opponents. The FA are extremely keen to be seen to promote from within – it worked with Southgate.

Cooper has transformed Forest since taking over, getting them into the Premier League, while juggling 427 players in his first-team squad. In that context, their start in the top flight is understandable and he remains attractive to potential employers, especially while his current deal allows him to be taken from Forest for a modest fee.

Why he wouldn’t: Forest are desperate to pin him down to a new deal, if only to secure themselves more compensation when he inevitably moves on.

To be honest, it’s hard to see why Cooper would turn down England should they come knocking. Regardless of his achievements at Forest, no manager is ever truly safe at the City Ground, especially if they fail to arrest their recent form.

Would he be universally welcomed by the public? Probably not. His profile doesn’t yet offer the kind of kudos the candidates above carry. The FA didn’t see that as a problem when they appointed Southgate, but they were able to trial Southgate as an interim first.

Why he might: Firstly, we need to mention that Rodgers is actually sixth-favourite to be the next England manager. Between him and Cooper in the bookies’ prices is Arsene Wenger, but we don’t believe him to be a more credible, realistic candidate than Rodgers. Wenger’s presence feels like a habit.

Rodgers is a far more likely appointment, despite his current problems at Leicester. The Foxes have made a truly wretched start to the season after a summer Rodgers spent with his hands tied behind his back. Almost certainly, Rodgers would jump at the chance to manage England, while Leicester would be happy to take whatever compensation they might be due since reports suggest the main reason the Northern Irishman remains at the helm at the King Power is because the club cannot afford to sack him.

So far, Leicester’s fortunes are not the stain on Rodgers’ record they might become if the current situation is allowed to continue. If he and Leicester were to part sooner rather than later, then the factors behind the Foxes’ woes would be reasonable mitigation. If he stays and Leicester remain rooted in the table, his reputation will go the same way as the Foxes.

Rodgers fancied the Manchester United job but his current standing would likely deter Big Six clubs. The FA, though, would probably be more open to his style of management. The ex-Liverpool boss has spoken of the appeal of a national team job – “I want to manage at international level at some point in my career” – and the new year might be the perfect time.

Why he wouldn’t: We’ve just gone through all the reasons why Rodgers would take the job and, as much as we enjoy being contrary, it’s hard to see any reason why he wouldn’t.

The big question is whether he would be given the opportunity. The bookies have five people ahead of him in the queue to manage England. If the FA share that outlook, Rodgers would be relying on at least three other candidates to fall by the wayside.