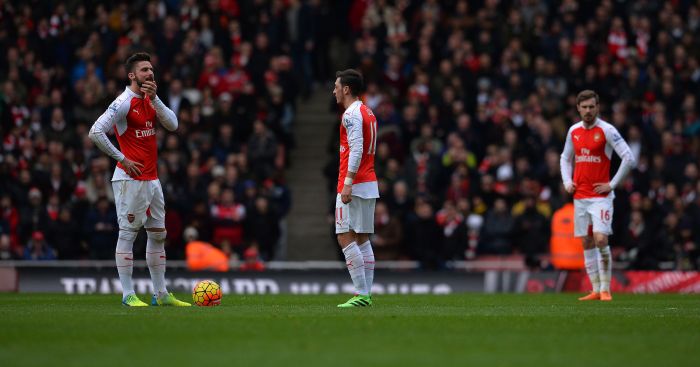 Former England defender Danny Mills has questioned Arsenal’s “mental resolve” to get through a “tough” month of fixtures.

Despite victory over Hull on Saturday, the Gunners haven’t been at their best over the last few matches with losses against Chelsea and Watford hurting their title bid.

Arsene Wenger’s men play Bayern Munich on Wednesday in the Champions League before travelling to Sutton United in the FA Cup next Monday.

Off the back of the match with the non-league side they are on the road at Anfield to face Liverpool before the return fixture with Bayern.

And Mills doubts that the current Arsenal squad have the character to deal with such an important run of matches.

When asked about the gravity of the Gunners’ next few fixtures, Mills told Sky Sports: “It’s hugely important.

“Sutton won’t be easy, I was there when they played Leeds at home on the astroturf. It makes a big, big difference and it won’t be easy for Arsenal who you expect to make changes.

“If they were to lose against Munich, lose to Sutton, lose to Liverpool then suddenly they’re out of all three competitions.

“In my eyes I don’t think they are really in the Premier League race at the moment.”But it could be a really disastrous next four or five games for Arsenal.”

“I’m not sure they do and I’m not convinced Arsene Wenger thinks they do either.”