Mourinho and Moyes are among the five bookies' favourites to be first out of a job. We take a look. 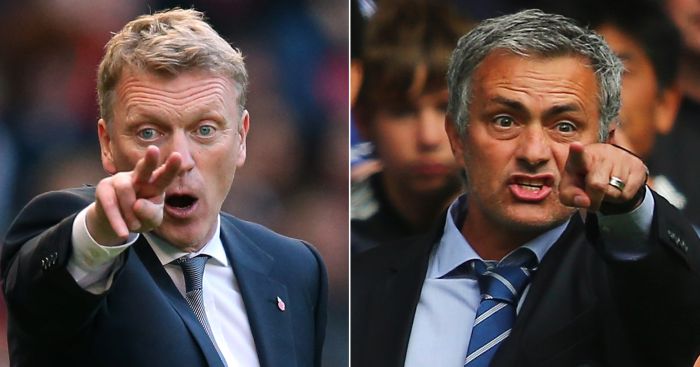 The Premier League is less than three games into the season but already some managers are under pressure. Let’s look at the cases for and against the bookies’ five favourites to be first out of a job…

Why West Ham will sack him: Aside from the fact that he was very much a stop-gap appointment, West Ham have started the Premier League season with two defeats and their run of fixtures between now and the end of October is quite horrific. Between the visit of Wolves on Sunday (which Moyes cannot attend) and the trip to Liverpool on Halloween, the Hammers face Leicester, Tottenham and Manchester City. It is entirely feasible that West Ham could go into November still looking for their first win. Should that be the case, the Hammers will surely put someone else in charge of the hunt.

Signing some new players might help Moyes but David Sullivan was very downbeat over the prospect of signing anyone before October 5. Regardless, their record in the transfer market doesn’t inspire any confidence whatsoever. Sullivan admitted they have a “very unbalanced squad” and no-one beyond Moyes’ family is entirely convinced he is the man to eke enough out of these players.

Why they won’t: Sullivan and David Gold prefer not to fire managers in large part because of their reluctance to cough up for pay-offs. They can let Moyes go at the end of the season for nothing – presuming West Ham don’t meet the performance-related clause that would see the manager’s contract automatically extended, but if those conditions are met, there will be little desire on the board’s part to sack him anyway. If supporters were allowed into the London Stadium then the owners may be more tempted to use Moyes as a temporary scapegoat but for as long as they don’t have to face the protests, they will more than likely plod on regardless, especially if the team shows the kind of spirit they displayed in the defeat to Arsenal.

“Unfortunately the benchmark is high & it’s hard to get the players.”

“We chased dreams the last two years & bought a pile of players.”

Why Fulham will sack him: Parker’s history at Craven Cottage perhaps buys him more credit with supporters than an outsider might enjoy but there is a precedent for Fulham fans to call for his head when things aren’t going right: a year ago amid a run of four without a win. Obviously the Cottagers turned their season around as Parker grew into the job but there is still a huge amount of work to do to solidify a defence which is currently unfit for purpose in the Premier League. Michael Hector looked out of his depth in the opening two games and the USA defender desperately needs an experienced partner, or Parker will be buried under the avalanche of goals Fulham are sure to concede.

Why they won’t: Parker was given a new three-year contract only three weeks ago and, unlike the last time they arrived back in the Premier League, Fulham have been content to build slowly, even if that means scrapping for survival this term. The Cottagers haven’t spent huge sums, instead preferring to trust many of the players who brought them up and that presumably extends to the manager if his new deal is any indication. As long as Fulham put up a fight, then Parker, whose ties with the club go beyond his time as manager, is probably safe, especially if they seize upon the favourable run of fixtures coming up – the Cottagers don’t meet any of the big six until December.

🗣"We need player in for sure!"

Why Tottenham will sack him: Because many doubt whether he should have been given the job in the first place. Mourinho and Spurs always seemed an odd fit; on and off the pitch, there have been signs that it just isn’t working, from some truly dire performances to signs of friction in the dressing room. Come October 5, it seems that Mourinho won’t be able to complain over a lack of backing. If Daniel Levy can furnish Mourinho with a centre-back to play with Gareth Bale and Sergio Reguilon, then the chairman will be entitled to expect an immediate impact. If that doesn’t come, Mourinho might not last a year in the job he took from Mauricio Pochettino last November.

Why they won’t: Levy appears willing to invest in Mourinho the transfer spend that Pochettino was never afforded. In signing Bale, Reguilon and possibly Milan Skriniar, the Spurs board have demonstrated the kind of faith in Mourinho which many supporters might not share, but their dissenting mood has at least been quelled by the loosening of the purse strings. Levy doesn’t lavish that kind of cash upon a manager who could be a poor run of form from the axe. This is Spurs’ first season since 2015/16 without Champions League football and the board seem to believe that Mourinho – and all that he brings – is their best chance of making their absence fleeting. Only a breakdown in that relationship akin to those Mourinho suffered at Chelsea and Man Utd will change that theory and right now, that seems some way off.

"Son was on fire, but for me Harry Kane was man of the match."

"Second-half we were too good for them."

Jose Mourinho speaks to @lynseyhipgrave1 after a 5-1 win away to Southampton. pic.twitter.com/ycqqy1IzBW

Why Crystal Palace will sack him: Any reversion to the appalling post-lockdown form that saw Palace lose seven of their last eight and collect a solitary point from 24 available will force Palace to consider whether Hodgson should be allowed to see out what is likely to be his final year in charge at Selhurst Park.

Why they won’t: Because Palace have started the campaign in completely contrasting form to that in which they finished last season. The Eagles have won two out of two, impressing against a buoyant Southampton side and a Manchester United team that, although undercooked, was still expected to roll them over. Instead, the Red Devils were outfought and out-thought, indicating that the players remain firmly behind Hodgson. And Palace are far from full-strength. They were missing their entire first-choice back four when they shut out Saints on the opening day and against United, they scored three despite their two new attacking signings, Michy Batshuayi and Eberechi Eze, starting on the bench. Instead, Wilfried Zaha is already only one goal short of matching last season’s tally and the winger looks fit and hungry. If Hodgson can keep him that way, his last job is surely safe.

"The pace on the counter-attack was out of this world." 🔥@Carra23 was full of praise for Roy Hodgson's #CPFC following their 3-1 win at Old Trafford on Saturday – giving it the full #MNF treatment on last night's show…🦅 pic.twitter.com/JykoYikmPa

Why West Brom will sack him: Albion’s form is woeful, stretching back to the end of last season which concluded in promotion almost by default after Brentford let them off the hook for not winning any of their last four games as the pressure increased. Bilic’s side have begun the new season in similar fashion, conceding eight goals in two matches and allowing Brentford some minor consolation after the Bees knocked the Baggies out of the Carabao Cup. Okay, it has not been an easy start in the Premier League, with Leicester, Everton and Chelsea in their first three matches. But there is a kinder run to come after Frank Lampard’s men visit The Hawthorns on Saturday – Saints, Burnley, Brighton, Fulham – by which time Bilic will hope the Albion board have engaged in some savvy recruitment. Because they may begin looking for a new manager unless there has been a marked improvement in form and fortunes by November.

Why they won’t: Because bringing the Baggies back into the big time was little short of miraculous work on Bilic’s part during his first year at the club. Albion, like Fulham, have taken a different approach compared to their last campaign in the Premier League and some of their recruitment has been done with the long term in mind. Bilic, even though he only has a contract to the end of the season, also factors into that thinking. The club are unlikely to panic and pull the trigger given he has earned the opportunity to squeeze even more out of a Championship-standard squad which is vying with Fulham as the bookies’ favourites to finish rock-bottom.

Slaven Bilic sent off by Mike Dean for remonstrating with the referee after a red card for Keiran Gibbs.

He wasn't happy with the sending off and the first Everton goal which was initially ruled out, but then allowed via VAR. #EFC 2-1 #WBA #EVEWBA pic.twitter.com/y1t7tRRQyB