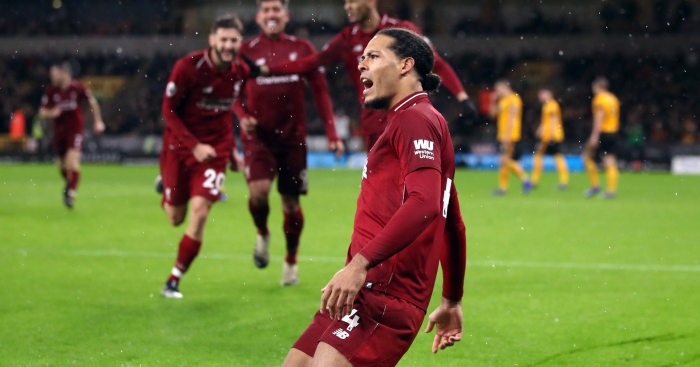 As Ruben Neves released Adama Traore down the right-hand side, the briefest of silences befell Molineux. In that fleeting moment of calm before the forecasted storm, you could almost hear the clattering of seats as an expectant home support rose in unison.

Murmurs of promise soon became cries of excitement. Traore’s end product has been justifiably questioned countless times; he is far more threatening as an idea than he is in practice. But he creates chaos, and had found a rare amount of space beyond Andy Robertson, the left-back caught trying to hare back into position in the sort of fashion that would leave Jose Mourinho breathless.

This was Wolves’s chance. They had been the better side in the first half, yet lacked the one thing Liverpool have in abundance: killer instinct. Mohamed Salah’s goal was the only thing separating the two sides after 58 minutes.

So when Traore latched onto the pass and took a strong first touch, it felt inevitable that something would happen. There was no guarantee of an equaliser, nor even a shot, but danger was surely imminent.

Enter Virgil van Dijk. While the rest of the stadium was expecting to be engulfed in smoke, the Dutchman doused a potential fire even before the embers started to flicker. Having spent the evening winning headers, he accepted the challenge of a sprint against the fastest player in the Premier League, a winger who completes more dribbles per 90 minutes (6.1) than Newcastle, Huddersfield and Burnley.

Van Dijk keeping up with Adama Traore. Not sure anyone else has managed that this season… pic.twitter.com/rMoRmhQMwo

Watford striker Troy Deeney once noted that he “hates” playing Van Dijk. “He’s too big, too strong, too quick, too good on the ball, loves fighting, a good head of hair,” he said, adding that he even “smells lovely”.

He was too big and strong for Raul Jimenez, too quick for Traore, and too good on the ball for Wolves to keep up, completing more than 90% of his passes. He was the difference on Friday in what, for large periods, looked like a game between two equals.

This was as good a performance as any to showcase the strengths of a player with no weaknesses. Van Dijk was imperious and impenetrable, a tower of security and stability. Dejan Lovren managed to avoid jinxing the leaders, but still lost his footing in a couple of crucial moments; James Milner was fortunate not to concede a penalty on Matt Doherty; Robertson made a handful of mistakes. Van Dijk alone elevates an otherwise solid but unspectacular defence to the foundation for a title tilt.

Since he joined, no player has played more minutes for Liverpool. No player has completed more passes, made more clearances, won more headers, or made more interceptions. Opponents cannot go through him, under him, over him or around him. They must simply hope for the best, because in his current form, there might be no better defender in the world.

By the end of the game, he had collected both his 17th clean sheet and first goal for the club in 32 matches since joining in January. No club has ever conceded fewer than Liverpool’s seven goals at Christmas in a Premier League season. Considering the Reds had been breached 20 times after 18 games in 2017/18, Van Dijk has been by far the biggest factor in that transformation.

The Premier League player of 2018 is the reason for Liverpool hope to become expectation in 2019. With Van Dijk, it really could be their year.