Home Mailbox Can you Neymar bigger waste of money?

Sympathy for Neymar is in incredibly short supply. And was it really a great final? 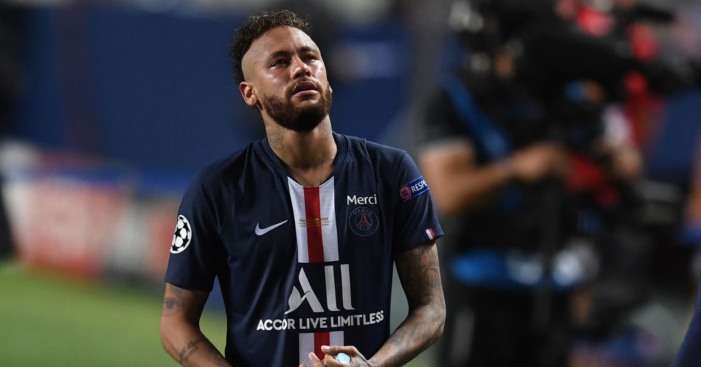 Can you Neymar bigger waste of money?
The 2020 Champions League Final, Lisbon. 78 minutes in. PSG are trailing 1-0 to Bayern. Neymar receives the ball close to the touchline and tries an unnecessary flick. The ball roles out of play. Possession is conceded. Two minutes later he lashes out and gets booked. On 84 minutes, Steve McManaman comments, ‘Poor again by Neymar’. On 87 minutes, Neymar missed a good opportunity to release Kylian Mbappé with what would seem to be a straightforward lofted pass. 222 million Euros?!

Neymar the Celebrity/Instagram Influencer may also happen to be a very talented footballer, capable of exciting moments and, to his credit, he did win a Champions League final – in a team featuring luminaries such as Messi, Suarez, Xavi, Iniesta, Busquets and Pique. He will undoubtedly win more domestic titles if he stays in France and would in all likelihood win more silverware if Real Madrid or Barcelona decide take a chance on him to reverse their respective downward trajectories in European football. Any potential suitors viewing last night’s final will have observed the demonstrable caveats of signing an insanely expensive player who functions well when the going is good but can often become peripheral (not to mention his track-record of injuries at crucial moments) in Important games.

It seemed likely that the excellent Mbappé would tire as the final progressed and, as this eventuality played out as expected, PSG became reliant on the World’s Most Expensive Footballer™. Instead of an inspirational second half performance, the Brazilian was subdued, frequently being wasteful and petulant. While Mbappe, having witnessed Neymar’s tendency to flatter to deceive from the bench, entered the field to have a galvanising effect on his team against Atalanta, the latter was unable to return the favour against a well-drilled Bayern defence. Even the commentators gave up on him and appeared disgusted at his profligacy.

Statistically, Neymar cheerleaders can point to his trophy collection and indeed his goal scoring record. A closer analysis, however, does paint a picture that is less favourable than his stats’ face value. 0.88 goals per game at Paris is commendable, but 0.55 goals per game at Barcelona is a relatively poor return, considering the fortitude of THAT team. Luis Suarez is rarely spoken of in the same breath as Neymar, yet has managed a 0.77 goals per games record over a much greater number of fixtures. Similarly, Ibrahimovic (0.92 gpg at PSG) and Mbappe (1.02 gpg since his permanent signing) overshadow his record. Furthermore, it is difficult to argue their domestic successes during Neymar’s PSG career would not have happened without his acquisition. Ironically, Kingsley Coman, a youth product that PSG let go for free in 2014, ended his hopes of European glory last night.

Notwithstanding the plethora of YouTube and Instagram clips of Neymar tricks which cater to casual fans in search of footballing eye candy, it is looking increasingly likely that he will be remembered as an enigma who never really reached his footballing potential. Perhaps more pertinently, his excessive transfer fee and wages will certainly serve as an obvious warning to the world’s biggest clubs that one swallow does not make a summer and shiny purchases may only serve for pretentious posturing. Again, 222 million Euros?!
AC in Milan

…Cry if you’ve played your pants off and been robbed…but if you’ve been bought for EU200M or whatever explicitly to win the CL, but were an average player, on the lesser team, for the full 90 mins, didn’t take your chances, dived about in your usual fanny-merchant manner, and didn’t materially contribute nor affect positively the game’s outcome for good…THEN WHAT EXACTLY ARE YOU GRIZZLIN’ ABOUT? Oh yeah…cos the TV cameras are there and you are ‘somehow special’. Emotional-diver as well. What an absolute w**ker.
Paul Chipperton, Toronto

Hansi…touching Hansi
Bayern complete the treble for the first time since 2012/13, now has there been a greater mid-season turnaround than this Bayern side?

From fourth before Hansi Flick took over, to Treble winners, Bundesliga, DFB Pokal and Champions League, a Champions League record breaker too by being the first side to never drop a game, just insane, Flick has managed 36 games and won 33 resulting in three trophies and the style of football is exceptional too.

The only other manager I can think of who had even close to such success after coming in during mid-season was our own Roberto Di Matteo who guided Chelsea to the FA Cup and Champions League, but got sacked few months later.

Special shout out to the scorer of the winning goal Kingsley Coman, his 20th trophy of his career and he is still only 24, that’s more trophies than Lazio or Roma have won in their history.
Mikey, CFC

Bayern deserved it but…
Bayern played great and overall probably made fewer mistakes. I think they actually created clear cut chances too rather than just trying to capitalise on mistakes. The goal itself was probably the best bit of attacking football in the entire game.

Early on both teams were so conservative and the football lacked coherence. It was actually remarkable that despite the crazy high line that Bayern were playing PSG seemed more concerned with keeping tight at the back rather than trying to force an error with a bit of risky attacking football. It’s a shame because with Di Maria, Mbappe and Neymar you would have thought they had the perfect front three to basically bypass the midfield and give those three a chance to run in behind. I wonder if Tuchel adopted a bit of a Mourinho mindset to the game and decided to try and be the team that made the fewest mistakes.

Both teams made glaring errors though. It was crazy that Mbappe failed to score in the first half when Bayern literally passed to him in the middle of their own box. It surely can’t have been nerves given that the kid has literally already won everything else in world football.

I felt bad for Neymar at the end but also think he doesn’t help himself. When the team were trailing in the last 15 minutes he must have lost possession four times trying to do something crazy instead of trying to be sensible and keep the ball. He was rarely even in a worthwhile position when trying the flicks and tricks. He went down from the softest challenge by Gnabry which ultimately resulted in his team mate getting booked and subbed off; again his antics forced Tuchel to make a change that might have not been his first tactical choice (though, in fairness, I’m sure Veratti on with 30 minutes to go was always part of the plan).

Towards the end of the game he got the ball in a bit of space and tore down the left side with strength and speed. It left me thinking that if he did less of the play acting and more of the actual footballing then he’d probably have had more of an impact on the game in the end. In a game where Bayern played a risky high line and you have a great front 3 – I would have imagined that going down under the slightest contact was a suboptimal strategy compared with staying on your feet and trying to beat a man so you can run into all the space behind.
Minty, LFC

Steady on Matt…
I think Matt Stead was a little OTT in his review of the Champions League final. After a decent opening 45 minutes, I thought the opening of the second half was very scrappy and it felt like PSG had lost their collective heads a little, with the exception of their heroic defenders.

Neymar seemed more like the guy I didn’t particularly like at the last World Cup and Mbappe really HAS to bury that shot – given the context it is something he’ll wrestle with for a while. To me Bayern showed more cohesion and won every second ball. Once PSG went behind I felt they were still starved of possession and would not get back into it. Bayern disrupted, harried and hustled their way over the line and are a brilliant team. I feel like I saw the soul of Bayern but I’m still not sure what type of team PSG are. Maybe they’ll show us next year. I thought it was a good final and I loved the result but I’m interested to see if everyone else thought it was that great.
Michael, Ireland

Liverpool win again
If I’m not mistaken, Coutinho’s Liverpool-Barcelona transfer has a clause: if Coutinho wins Champions League Barcelona has to send few millions towards Liverpool.

And Barcelona thought it can’t get any lower…

Amazing transfer deal by Liverpool. I hope they added “percentage from next sale” clause as well.
Adlan