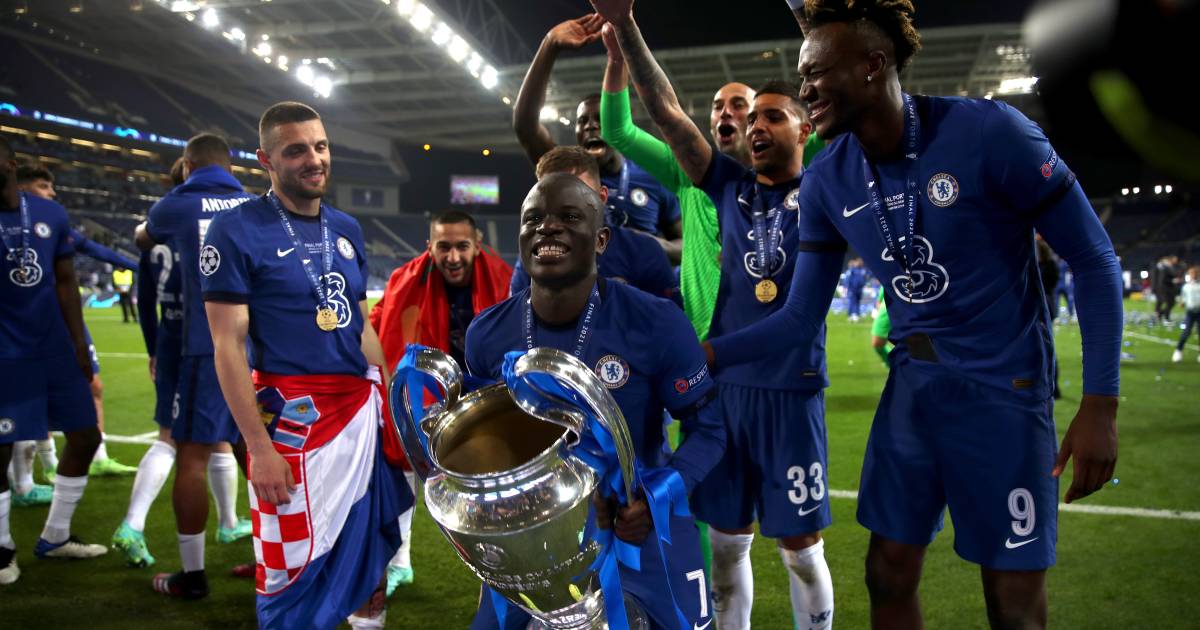 This week we pay tribute to N’Golo Kante – the only Chelsea player that everybody loves.

Who’s this then?
N’Golo Kanté is a 30-year-old Parisian who stands just 5’ 6” tall, plays in midfield for Chelsea and is the best in the world at what he does. And what he does is, basically, everything. As the old chant used to have it: “He’s here, he’s there he’s every f**kin’ where.”

He got his start at Boulogne in 2011, playing almost a full season in 2012/13 in the French third tier. He joined Caen in the second tier and won promotion at the first time of asking. In his second season, now in the top flight, he recovered the ball more times over the season than any other player in the whole of Europe!

It was at this point he was scouted by Steve Walsh at Leicester City, snaffled for a mere £5.6million and, in an extraordinary season in which he amazed and delighted everyone with his skill at dispossession, stopping and redistributing, his ability to set progressive moves going, as well as his non-stop, ground-eating approach to football, he won the league with The Foxes. Now worth £32 million, Chelsea signed him in 2016 and he won the league again, making him the first player since Eric Cantona to do so at two different clubs. In that season he made 175 tackles, 31 more than any other player and 157 interceptions, 15 more than any other player.

His haul of honours is stupendous. He won both the Football Writers and PFA Player of the Year for the 2016/17 season, won the FA Cup the following year, the Europa League the year after and this year, the Champions League, a performance so magnificent he was awarded Man Of The Match. He now has every honour it is possible to hold in English football except for a League Cup medal. Oh yeah, he’s got a Euros runners-up medal too and the small matter of a World Cup winner’s medal. Nay bad, like.

He was out injured for a while and then played out of position before being restored to his rightful place by Thomas Tuchel. Now, once again, he is King Of The World and must surely be a favourite to win the Ballon d’Or this year instead of the Shuffler or the Preener.

So far he’s played 380 club games and scored 22 goals. He’s also played 45 games for France since 2016 and looks set to be a star of the upcoming Euros.

Why the love?
Those are just the extraordinary bald facts, but there’s so much more to N’Golo. Firstly, any player that runs around a lot, no matter who they are, is likely to get the fans on their side. The minimum we want is for players to put some effort in. But N’Golo doesn’t just run. He is relentless like no other player I can recall over the last five decades. The first minute, to the last minute, it makes no difference to him.

His is an art that is easy to appreciate from the stands; the amount of ground he covers ensures that. He is as fresh at the end of a game as at the beginning. Interviewed after the Champions League final, you wouldn’t have known he’d been running his heart out, so serene, smiling and fresh was he. Even just from that perspective, he is remarkable, but there’s so much more to his game. Don’t let all the running mask his skill as a footballer. He isn’t just a disrupter – though he’s that as well – he recovers the ball and then does something progressive with it. He may be the finest tackler in world football at a time when many feel it is a dying art. He can track a man from behind, pull level, stretch out a leg and poke the ball away with the outside of his foot. He’s brilliant at it.

It is rare that we can see a player’s legend being written in the history books as he plays, and rare also to find a player that absolutely no-one dislikes or can take against for anything. He’s just too likeable and too good, so much so it must be an honour for him to take the ball off your toe and set up an attack.

It has often been said that he is the whole midfield all on his own. At the very least, with him in your side it feels like you have two extra players. Despite or because of his size he seems impossible to intimidate, isn’t fearful of bigger, stronger opponents. He times tackles so perfectly that he steals the ball, rather than thundering into a tackle to win it. It makes the art of tackling into less an act of physical domination and more one of precision timing.

It doesn’t stop there. While he’s not a prolific goalscorer, he can batter one in from 30 metres with the best of them.

And yet despite being a world-beater he seems unaffected by any of it. You wouldn’t think he was doing anything out of the ordinary by his demeanour and attitude. It’s all in a day’s work for N’Golo. It’s one thing to have an exemplary work ethic but another altogether to have that ethic combined with an easy-going, unassuming manner.

He had the chance to go to PSG but I’m sure he’s glad he hasn’t because under the new Chelsea manager he seems to he’s thriving once again. It’s been the return of the Kante we all loved and a man with no equal.

He apparently even turned down Chelsea’s offer of an offshore account to avoid taxation. We can all think of players who absolutely would not have done that. Fair play to him for having decent values.

What the people say
The non-tribal nature of the Kante love-fest is very noticeable for its unusualness. I wish there was more of this in football. Appreciating great talents offers so much joy and celebration. Taking against people just because you don’t like their hair or that they play for a club you don’t like seems enormously and pointlessly petty. I get why this doesn’t happen, but think it is one of football’s worst traits. Why deny yourself pleasure?

We begin, as ever, with a splendid, illuminating, insightful 4_4_haiku

Matt Greer named his dog after him, and it’s a girl…

His footballing intelligence is absolutely preternatural and has been overlooked for far too long in favour of a reductive (and possibly racially iffy) “Duracell bunny” caricature.

I’m a Leicester fan so he will be intrinsically linked to our title winning season. He was such a great player for us, and clearly a genuinely nice and humble guy. I was gutted he left, but am really happy for him that he’s killing it at Chelsea and with France.

Whenever I think of Kante, this is the story that pops into my head. Just an unbelievable man.https://t.co/ord6vjJrkr

Like a great bass player in a band he can be the one who goes unnoticed but nothing would be the same without him. A human dynamo of a player.

One other comment: when, in the Ibramovich era, did Chelsea have a player that was this close to universal popularity?

People used to have a conversation about him. Is he a traditional DM like Makalele? Is he a box 2 box midfielder? It appears he is the entire midfield with the most beautiful smile in world football.

I’ve never seen any player have a better season than he did when Leicester won the title. Mahrez and Vardy got most of the publicity and awards, but Kante was the biggest reason they won. Genuinely appeared to be more than one of him on the pitch at times.

He allows teams to have an extra player in midfield, by doing the work of two…

I love this video so much because it does a brilliant job of summing up both how much his teammates love him and how utterly bashful he is when receiving attention. Perfect distillation and a lovely song to boot https://t.co/yajVOmpA0C

Reminds me of a tale @skipboyd told me about his time at @sligorovers – where Seamus Colman was so good he could play right back and right wing on his own, allowing them to effectively play 4-5-2!

It’s a choice between him and Maradona for the most important player in a team ever. I don’t think the teams he has won trophies with would have won without him. He seems to be both the first and last outfield player an opponent has to beat to score a goal, omnipotent sums him up.

Fabulous player and one of the best in the world but genuinely seems baffled that people like/rate him for some reason. He almost makes you like Chelsea which is some achievement.

Unbelievable player and by all accounts a great lad. Many pretenders to Makelelé but here the student has surpassed the master. The Ballon D’or isnt enough – the nobel peace prize perhaps for that infectious smile. 👏🏾

Not often you say this but in his position, a modern day great. Dynamism, can read a game and can pass a ball and he does it all with ease.

A phenomenon. Central to two PL winning teams and now a UCL medal to boot but seems to still be an unassuming character

Probably my favourite player in the world despite him playing for Chelsea. Manages to close down every space in midfield completely while at the same time always being a passing option for every teammate. Very strange. Its like he’s been cloned. Or, more likely, runs like 2 men

Utterly amazing. Up there with the best midfielders to have played in the prem and seems incredibly humble with it.

He almost seems to float and bounce around the pitch. Incredible athleticism.

I really dislike ‘embarrassed’ almost as much as ‘destroyed’ but there’s no denying the fella’s sweet touch in these clips:

Future days
How long can he play the game he plays? Now 30, is it possible to think he’s got eight or nine years in him yet? He doesn’t have to maintain his pace and could play like one man instead of three and he’d still be contributing hugely to any side. For his tackling and distribution skills alone he’d earn a place. So it seems likely that his career is only half-way through right now.

That’s quite a thought for a man who has won almost everything. When not present, his absence is felt more keenly than any other simply because there’s no-one else who can play the role he plays. I can’t think of any other player who has created and self-defined a role for himself in a side like N’Golo has. When you play a role that no-one else does or can play, then you’re never going to be short of suitors but under Tuchel’s refreshing new regime, more sparkly silverware seems almost an inevitability. Long may he chase, harry, tackle and smile.