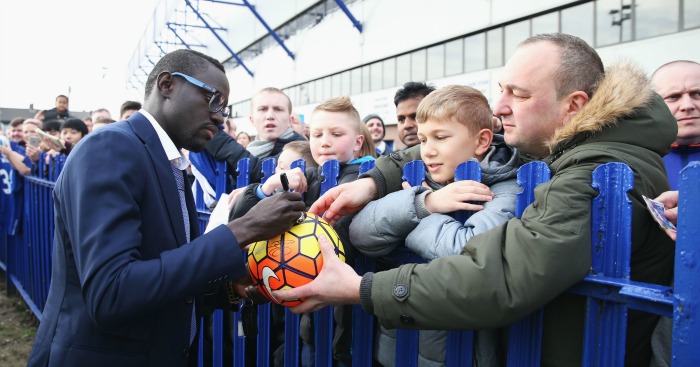 Oumar Niasse (Everton, £13.5m)
“He’ll need a little bit of time to understand the Premier League, with the tempo and all the new aspects of the league. But I wouldn’t expect too long because he is the type of player who can have an impact in any game. He is a strong, powerful striker who can play in different positions. He is going to be a terrific, fresh addition to a squad that will welcome his ability. The freshness Oumar Niasse brings is going to be very positive going forward” – Roberto Martinez, Feb 1.

By the end of the season, ‘the real Oumar Niasse’ had played a grand total of 142 sluggish league minutes. By the beginning of August, Martinez had been binned by Everton and new manager Ronald Koeman had taken the No. 14 shirt off his back. At this juncture we must remind you again that he cost £13.5m.

Lewis Grabban (Bournemouth, £7m)
Perhaps it was Bournemouth’s purchase of Lewis Grabban (one goal in six Premier League appearances for Norwich) for £7m that persuaded Liverpool that the Cherries would one day spend £15m on Jordon Ibe and a potential £6m on Brad Smith. When manager Eddie Howe spoke about signing “someone who was popular in the dressing room” when buying back a striker sold 18 months and just 13 goals previously for £3m, you wondered whether it was an act of friendship rather than one motivated by football.

Grabban played 15 Premier League games as Bournemouth’s season petered out into a string of defeats and Howe’s prodigal son did not score a single goal. Is he now behind Callum Wilson, Josh King, Benik Afobe and Lys Mousset in the striker pecking order? Almost certainly yes.

Chelsea manager Antonio Conte has made it clear that giant American centre-half Miazga is far from the required standard, but the clues were already there when Guus Hiddink took him off at half-time against Swansea to replace him with Jon Obi Mikel (not a defender) in the centre of defence. The only thing we can confidently say in Miazga’s favour is that he looks better than Papy Djilobodji.

Daniel Amartey (Leicester City, £6m)
One player not mentioned in Rory Smith’s examination of guru thinking in the transfer market making everybody forget Steve Walsh’s errors at Leicester (Andrej Kramaric, Yohan Benalouane, Gokhan Inler) was Amartey, possibly because he is just 21 and it seems a tad harsh to judge a 21-year-old. But there has been little in Amartey’s 101 minutes of Premier League action to suggest that the Ghanaian is worth anything close to £6m. There was certainly nothing to suggest that in the way that he and Nampalys Mendy were steamrollered by PSG at the weekend.

“I support Manchester United, I’ll be happy to play against them next season,” said Amartey last month. We suspect he will be denied that happiness, with Daniel Drinkwater and Mendy likely to be the Foxes’ first-choice midfield pairing for the Foxes’ difficult second series.

Jonjo Shelvey (Newcastle United, £12m)
Just a few months after joining as a potential saviour, one of two England internationals lured to the north-east by a big club in even bigger trouble is far from guaranteed first-team football in the Championship. Having been signed and made captain by the bumbling Steve McClaren, he was de-skippered and then dropped by Champions League winner Rafael Benitez, and played barely an hour of football as the Magpies ended the season with the belated flourish of a six-game unbeaten run.

A special mention at this point is also due to £5m signing Henri Saivet, who did not play a single minute under Benitez. Reports in April suggested that Benitez was so unimpressed with the Senegalese midfielder in training that he simply left him out of drills. Now available for tuppence ha’penny.

Steven Naismith (Norwich City, £8.5m)
After a 1-0 defeat to Manchester United in May that pretty much condemned Norwich to relegation, Alex Neil was asked why his January striker signing had remained on the bench throughout. Because Cameron Jerome is quicker, was apparently the reply. That Neil then turned to Dieumerci Mbokani and then Patrick Bamford instead of Naismith must have brutally hurt the Scot, who only left Everton because he had fallen down the pecking order past Arouna Kone.

A goal 41 minutes into his Canaries career had given them hope of survival but that would be his first and last goal in yellow, green, greeny yellow or yellowy green in the Premier League. That his club are aggressively pursuing new striker targets tells us that the slow Naismith may be sitting still even in the Championship.