Home Arsenal Nicolas Pepe: 3/10 AND man of the match? 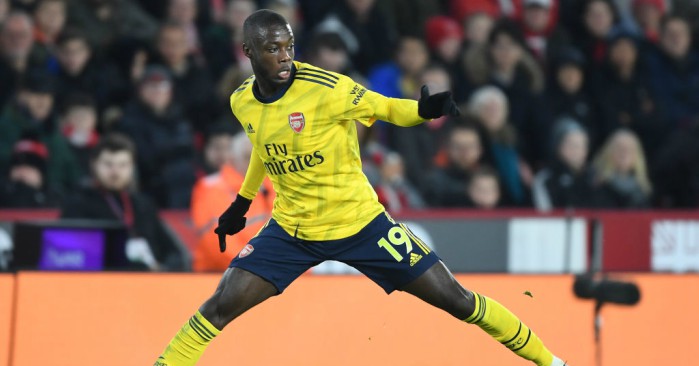 Simples
‘It is unclear whether Ozil would have made a difference against a Blades defence which has conceded just seven Prem goals – the joint-best alongside leaders Liverpool,’ writes David Coverdale in The Sun.

‘But that said, you would have fancied him to stick in the chance which came Nicolas Pepe’s way after 21 minutes.’

Indeed. It was a sitter.

But there’s something about the following two paragraphs that suggest that Ozil might not have been quite in position to score that sitter.

‘Arsenal’s £72million record buy started the move deep inside the United half, showing silky skills as he skinned a couple of players.

‘But after racing almost the length of the pitch, Pepe miskicked badly when Sead Kolasinac’s cross found him unmarked six yards out.’

Mediawatch can’t quite put its finger on the problem with Coverdale’s simplistic Ozil > Pepe equation here.

Chapter and curse
The back page of The Sun leads on Unai Emery’s comments about Pepe and claims that ‘Arsenal’s Bramall Lane curse struck again’.

Is this the shittest curse ever? Before Monday night, they had literally lost there twice in eight visits. Indeed, their last trip to that stadium ended in a 3-0 win for the poor cursed Gunners. Who ran over a black cat?

Gratings
Open up The Sun newspaper and you will see that their man of the match from Arsenal’s 1-0 defeat to Sheffield United was none other than Nicolas Pepe.

And that is because their ratings – which power their Dream Team game – are supplied by WhoScored, whose algorithm calculated that Pepe’s three shots, five dribbles, five tackles and five accurate crosses made him the game’s most influential player. They gave him 7.79, rounded down to 7 in the newspaper for reasons unknown.

Then we turn to The Sun Online and their own ratings from the game. Presumably there will be some sort of synergy with the newspaper here.

Apparently he ‘fluffed the easiest of tap-ins in the first half and looked clumsy all night long’. Oh. Clumsy even when he ‘started the move deep inside the United half, showing silky skills as he skinned a couple of players’? Clumsy even then?

More than ‘clumsy’, he was ‘woeful’ according to the headline that accompanies those ratings, which absolutely was not designed to pull in angry Arsenal fans.

Remember that description as you read the VERDICT – also from The Sun Online – in which ‘Nicolas Pepe showed glimpses of what it takes to be a quality winger’. While simultaneously being ‘clumsy’ and ‘woeful’.

Apparently at Bramall Lane he ‘started to show glimpses of why Arsenal forked out £72million for his signature in the summer. Some decent dribbles, a nice bit of trickery and a free-kick Dean Henderson threw his proverbial cap on’. Oh and ‘he needs to build on performances like tonight where he showed evidence of what is in the locker and turn that into delivering with goals and assists’.

So to get this straight – he was either 7/10 or 3/10 while ‘starting to show glimpses of why Arsenal forked out £72million’. Glad we all know where we stand.

Dr Foster
Pepe is where the hits are on Tuesday morning so we are treated to such wonderful headlines as these:

‘This will go down in history’: Fans mock Nicolas Pepe after glaring miss for Arsenal in Sheffield United defeat…as comparisons are drawn with sitter fluffed by Gervinho in 2012′ – MailOnline.

Shock of the day
‘Liverpool likely to axe Adam Lallana on free next summer despite Man Utd leveller’ – Daily Star.

They will allow their 32-year-old seventh-choice central midfielder to leave despite him having scored one goal in two years.

Spiteful nice lad
‘Long-time readers will know that Alli is one of my favourite players in our game when he’s on song and I do like the fact he’s a nice lad with that big grin,’ writes Stan Collymore in the Daily Mirror.

Now Mediawatch is definitely a ‘long-time reader’ and we remember that it’s less than two years since Collymore wrote that Alli was ‘acting like a spoilt brat’ who was ‘building up quite a rap sheet’.

Anyway, Collymore now writes that ‘if he even added one per cent of the nastiness of a Roy Keane or a Graeme Souness to his game it would be the start of him going on to fulfil his potential’.

Which is definitely the first time anybody has said Alli needs to add nastiness.

After all, it’s only two years since one pundit – who ranks Alli among his favourite players – described him as ‘spiteful’ and ‘antsy’ as he suggested that Gareth Southgate gave him the England captaincy. What a fine idea that was.