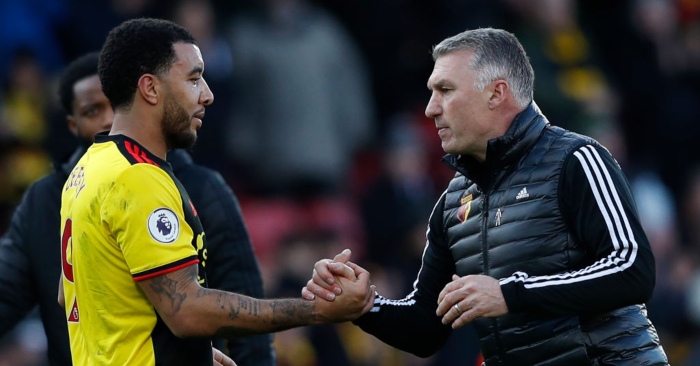 Remember the Proper Football Man? He’s fallen out of fashion in recent years. It’s not a term used positively since we appropriated the term in honour of the Tim Sherwood approach to football and life. Since then it has become a commonly and negatively used capitalised expression to describe…well you already know, don’t you? That’s how successfully it’s become embedded in football’s lexicon. But just for old times (or Tim’s) sake, here’s how Sherwood responded to a 2008 Small Talk interview in the Guardian.

What was the last book you read? “I don’t read books. I read the Daily Express and The Star.”

Not the Guardian? “Too much writing in it.”

Any kind of cheese? “Only cheddar. I don’t get involved in the rest of that muck.”

So few words that said so much.

But the PFM has not gone. Last week, I was listening to Ben Foster on 5live talking about why his new manager, Nigel Pearson, is so good. In short it was because “you can’t get away with anything”, “you always know where you are with him” and “he makes things simple” where previous managers had made things complex. Later in the week, another Watford player spoke glowingly about how Pearson had got the whole of the club’s staff together – 80 to 100 people – into a room at the start of his tenure, to tell them all in no uncertain terms how he wanted the club to progress.

Other reports describe him as ‘patrolling’ the training pitch, looking intently at the players and, in the traditional style, instinctively knowing who to put an arm around and who to kick up the backside. He has upgraded discipline to such an extent that apparently you can’t even run out for training with the laces loose on your boots anymore. You have to have them fastened properly.

All of this sounds suspiciously like the work of a PFM or certainly the strict PE teacher-style manager and as such, supposedly out of date. But given his early results at Watford, now clear of relegation, is it possible we have got it all wrong and that which was once thought old-fashioned, out-moded and inappropriate in the 21st Century is actually exactly what the modern player needs?

Let us not forget that Pearson single-handedly fought off an attack by grey wolves in the Carpathian mountains. He later recounted this.

“There was five of them – what they do is that one goes for you and the others circle around until one of them can bring you down – what they essentially do is rip the throat out.” So he backed himself against a tree, broke one of animal’s jaws – presumably with a classic PFM stiff right-hander – and gouged out the eye of another. The wolves, which by the way are sodding vicious-looking beasts, knew they were beaten and slunk off to lick their wounds.

Are you going to chin one of these?

By contrast, we have to remember that the Premier League footballer is pampered from an early age, infantilising them into their late 20s and beyond. They have everything done for them, all their meals cooked, all their kit washed. They have the best medical care, psychologists and physiotherapy free of charge. They have access to the best gym equipment and swimming pools, saunas and absolutely anything else they want. As Peter Crouch has revealed, they even have their underwear bought for them by the club. The club is, in effect, their butler.

Those, such as Roy Keane, say this has made some mentally weak or soft and thus in need of the hard word from a hard man like Pearson to knock them into shape. This may seem very unprogressive or dated. Surely we’re in the era of psychology, statistical breakdowns, of treating football like maths, of being in thrall to ‘projects’ and ‘philosophies’. Surely a big middle-aged bloke – with the blood of a wild animal on his hands – who will shout at you if you do things wrong, belongs in the past?

Possibly, but if so, why do so many players like Foster speak so highly and so affectionately of him? Many Leicester players also still do. Others who played for West Brom when he was assistant there do likewise. An uncomfortable truth maybe that in some situations, at some clubs, and with some players, the future is actually in the past, and that this explains the Pearson phenomenon, however unpalatable and unfashionable that might be.

Because when done well, a certain sort of masculine tough love can work. I know this. My form teacher in fifth year, Gary H, was a big man. Physically imposing. He took us for rugby. If you were looking for sympathy or God forbid, empathy, you’d have a long wait. He reserved praise for exceptional circumstances. However, it was by withholding warm words until you really, really deserved them, that made you want to impress him more, because when you got them, it felt so special.

It was brilliant psychology really, especially for a rebellious smart-arse beta male like me who thought he was above macho bluster and who was only playing rugby to try and impress girls, even though the only girls impressed by rugby players were the sort of girls I really didn’t fancy at all.

I played on the wing for the school XV. One time, I collected a loose ball and did the only thing I could do well, which was run really fast. Trouble was this time, as I took off, I was tackled by one of those huge 16-year-olds who was less the son of a steelworker and more the actual steelworks. He knocked me clean out for a few seconds. I was gone. Then I came to, Gary was leaning over me shouting; as my consciousness returned I finally understood what he was saying.

“Nicholson?! Can you hear me?”

He pulled me up by my armpits and wiped mud from my eyes.

He held my face in both his hands and stared into my eyes as if trying to assess how out of it I was.

“You alright?” he asked.

Somehow, on autopilot, I kept playing and in the final knockings, took a pass and scored a try in the corner to win the game, even though reality appeared to be locked behind double glazing.

Afterwards, still feeling a bit spaced out, I trooped back to the changing room. Gary waited for me, pulled me into his office and leaned into my face, jabbing one of his pork sausage fingers into my shoulder.

He turned me around, patted me on the back and affectionately pushed me towards the changing room. An almost painfully pleasurable autonomous sensory meridian response washed over my head, down my neck and spine. For a moment I felt lighter than air. Those few words made me feel so special. The fact I can remember them to this day is a marker for how important they were to me. I felt fantastic and as a result I would have run through a wall and got concussion again for Gary. The whole team would. No side was better motivated and I firmly believe we played well above our par simply because of the commitment we put in for him. He understood us and got the best out of us and it wasn’t by molly-coddling or being nice, or soft and emotional. It was by being quiet, hard, disciplined and knowing when to dish out praise.

It would seem that Pearson brings a similar quality to his management style. But it’s not 1977 anymore, so why is it working so well now in 2020? I suspect it is because it always has been, and still is, what a lot of people respect in a boss, even in today’s supposedly more enlightened times.

I’m currently writing a novel about a murder committed in 1960 by a brutal but popular police chief, popular because he used violence against criminals on the basis that if they didn’t like it, then they just had to stop breaking the law. Violence was the only language these hopeless recidivists understood, so you dished it out hard and in big portions. Many would still rather the police were more like Gene Hunt, prepared to bend and break the rules in order to catch a perp. You meet fire with fire, not with almond f**king milk.

People who see life this way tend to be dismayed by the bleeding heart liberal PC woke-ocracy. If you saw the way the whole Question Time-Laurence Fox-white privilege thing played out last week, it served as a good illustration of the cultural divide that now exists. We all know the snowflake epithet finds a home with this constituency.

These people would far rather have a red-blooded man who will break a wolf’s jaw with his fists in charge, than a thoughtful vegan who would be philosophically opposed to hurting an animal. And this isn’t a small number, either. I’d say it is an effortless majority.

We see from how people have voted in a referendum and recent general elections in England and Wales that many feel that things have swung too far to what they see as the elite liberal left and that there is a hunger to return to more patriotic, traditional values, whatever they may understand that to mean.

To some of us this is horrific and anathema to how we understand a better life can be lived, but the liberal left has always underestimated both the width and depth of the mainstream reactionary right. They have always thought the future belonged to them and have always been shocked when this is proven far from the truth at the ballot box by an electorate who want less sensitivity and more shouting, more iron fist and less velvet glove.

Pearson absolutely surfs this wave and I reckon understands the way most people are, far better than many. He’s A Gaffer. The Boss. He knows how to get the best out of staff, on and off the pitch; those who prefer simple, not sophisticated. Who want black and white, not nuanced shades of grey. Who want parameters to be definite and enforced. Who like repetition to inculcate learning. Who want to get things done, even if they have no idea of the consequences of doing so. Who feel you should set your stall out, lead with your chin and take no prisoners.

Once we understand that, it’s less hard to see why he is popular. Lots of men will respond well to his sort of masculinity. They like it. They understand it and feel more at home with it. It gives them structure, consequence and meaning.

His is every bit as much a philosophy as any other. There absolutely is a place for a hard man, for a quiet, determined and focused manager who wants to treat you like a man but will treat you like a child, if that’s how you want to behave.

When done well, it is just as smart a psychological approach as any more vaunted intellectual’s. It takes an understanding of how hard and how far to push people to get the best out of them, without alienating them. Perhaps it won’t work for everyone all the time, nothing does, but it does work with a significant enough number, often enough, to produce results. Even for those who are less inclined to be on board with anything quite so alpha male, it can work, just as it did for me at school. Would it work for elite players at an elite club? Or is it a way to drag the under-performer up and make them an over-performer? I suspect the latter.

But by any measure, however unfashionable or unfancied he might be in certain sectors, he cuts an impressive figure, is a fascinating man and his revitalisation is one of this season’s most compelling stories.