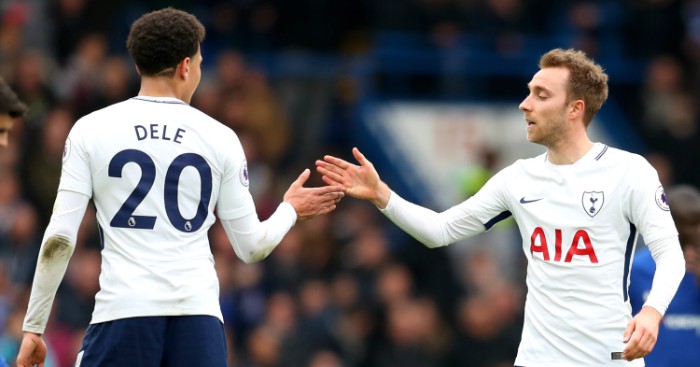 A very difficult week, for several reasons: 1) most of the big attacking performances came in the first 45 minutes, with Manchester City choosing to take the second half completely off (not that I blame them); 2) at least six West Ham players were good shouts for the list; 3) Spurs deservedly won without a single stand-out 90-minute individual performance.

I’ve done my best, but several very good performers have been left off, and fans of those sides are more than welcome to send me hate mail, or alternatively, to drop my choices and put in their favourites. A rare 4-2-2-2:

Goalkeeper: Orestis Karnezis (Watford)
Not a vintage week here, although there was a brilliant save by some guy who plays for Manchester United. Kasper Schmeichel made a few good second-half stops, including the penalty that turned the game, but also misjudged coming off his line twice in stoppage time. A couple of crucial saves by Willy Caballero too, but we all saw him freeze on the Eriksen swerver. Jack Butland and Jonas Lössl also had highs and lows. So the nod goes to a newbie, who’s played well since taking the job from Heurelho Gomes. In the first half he went high to his left twice to stop rockets from Junior Stanislas, and in the second tipped Jermain Defoe’s header neatly over the bar. Also once came out confidently to snare a free kick. Not a performance for the ages, but solid and effective.

Right–back: DeAndre Yedlin (Newcastle United)
For my money, his best game in a Newcastle shirt. Huddersfield may not be the most potent of attacking sides, but their wingers like to run at you, and Yedlin held off Elias Kachunga and Rajiv van la Parra with ease, recovering well the only time van la Parra got a slight advantage. Also pushed forward regularly and delivered several high-quality crosses.

Centre-half: Florian Lejeune (Newcastle United)
If you’re wondering why two Magpie defenders are on the list (and it could very easily have been three), look at the stats: Huddersfield managed only four shots, none on target. Lejeune didn’t do anything spectacular; he just made every play, looking particularly effective in the tackle. Jamaal Lascelles usually gets the press, but the Frenchman has developed into a worthy partner.

Centre-half: Declan Rice (West Ham United)
Southampton had the same number of shots on target as Huddersfield, with Rice one of the big reasons. He marked Charlie Austin well, was strong in the air, and stepped forward at the right times to win the ball. Passing-wise he mostly hoofed it, but we’ll let that slide under the circumstances. He’s only 19 years old, and his body language suggests uncertainty, but what counts are the results.  Teammate Angelo Ogbonna was similarly effective, and only loses out on the newbie tiebreaker.

Left-back: Andrew Robertson (Liverpool)
One of the better left-back performances of the season.  Although he seemed to be in the attacking half the entire game, he did much of his good work on defence, shutting off several dangerous Crystal Palace counter-attacks. Crossing was a little bit erratic, but the game-winning assist was a just reward for his overall fine play.

I hated to leave Paul Dummett off, because he’s been playing superbly lately, and was even better in defence than his teammate Yedlin. Yet another back-line player who’s stepping up under Rafa Benitez. But Robertson’s performance was just too strong both ways.

Deep Midfielder: N’Golo Kanté (Chelsea)
It sort of got lost as Chelsea faded, but he got stronger as the match went on, and overall showed more than enough characteristic brilliance to make this list. Maybe you can fault him for not closing down Eriksen on the goal, but it really came out of nowhere.

Deep Midfielder: Joe Allen (Stoke City)
A wonderful performance in defeat at Arsenal. Whether pressing or sitting back, was constantly around the ball. Led the team in touches and passes, and almost every pass went right to its target. Stoke City’s undoubted player of the year, deserves much better.

A very strong position this week. Abdoulaye Doucouré added some good defensive work to his usual marauding, and had the spot until Allen stepped up. Mark Noble and Cheikhou Kouyaté both excelled for West Ham, the former covering every blade at least twice, the latter charging forward to greater effect than any time this season.

Attacking Midfielder: Alexis Sánchez (Manchester United)
Well, well, well. Maybe he can fit the United attack after all. Like all right-thinking people, I hate to see Martial and Rashford on the bench, but when Sánchez remembers there are other players on the pitch, he’s quite a footballer. Hooked up well with Jesse Lingard and Romelu Lukaku, scored a nifty goal, and even tracked back on occasion. He’s 29, and I’d be surprised if he turns out to be worth all that money, but it’s always a pleasure to watch him when he’s in form.

Thought Alexis Sánchez's overall game was a lot better on the weekend. Granted, it's only Swansea, but should give him confidence going forward. Some great interchanges with Lukaku and Lingard.

Attacking Midfielder: João Mario (West Ham United)
A quiet player, although there was nothing quiet about his opening strike against Southampton. Calm, assured, with excellent close control, he glided around the pitch, making the simple passes and picking his spots for the difficult ones. Deserved at least half an assist for Arnautovic’s first tally. Some good set-pieces, too. Had less to do in the second half, but the damage was done.

You’re undoubtedly wondering where Dele Alli and maybe Christian Eriksen are, and the answer is: in the queue behind Romelu Lukaku. João Mario had this spot wrapped up over the Spurs men on the newbie tiebreaker, so it was either Alli or Eriksen in a 4-2-3-1 or Lukaku in a 4-2-2-2. Both Tottenhamers had moments of outstanding brilliance, but Lukaku had a fantastic entire first half, and only did less in the second because he wasn’t getting the ball. True, he had a much easier opponent, but all together now: you can only beat what’s in front of you.

You’re probably also wondering where Leroy Sané and David Silva are, and the answer is: putting their feet up somewhere, much like they did in the second half against Everton. Some searingly brilliant moments in the first half, but in a strong week I can’t pick them when they had nothing to do the rest of the way. I’d be happy to put posters of them on my wall, though.

A shout to Will Hughes, aka The Blondest Man In The Universe, for a fine outing on his first start back from long-term hamstring problems. Playing almost as a withdrawn forward behind Troy Deeney, he was active and inventive, notching a well-deserved assist while completing only 91.9% of his passes. He’s raw but a real talent, and on another day might have nicked a spot on the list.

Oh, and another excellent match from Jesse Lingard. So in Russia is it Jesse or Dele?

Striker: Marko Arnautovic (West Ham United)
When Marko’s in the mood, stand back. A glorious first-half display of movement, skill, and just plain will to win. Just as lively in the second half, although the side were mostly defending. He should take Arthur Masuaku out for dinner a few times after that stupendous cross, but the side-foot volley was a classic, as was the follow-up for his first goal. If you’re schadenfreuding to the max watching Mark Hughes, Alan Pardew, and Paul Lambert get embarrassed, once more with feeling: it’s David Moyes who put Arnautovic up front, and David Moyes who deserves the credit if West Ham stay up.

Marko Arnautovic is getting Hughes relegated twice after Hughes shouted at him on the touchline. This is unreal bastardry. Absolute bastard. Love it.

Striker: Romelu Lukaku (Manchester United)
And here’s Lukaku. We hear almost daily about his poor first touch, but in fact it’s quite good when he’s passing instead of trying to maintain possession. Why this is, I have no clue, but rev up the DVR and watch some of his one-touch work in the first half. Also watch his energy and intelligent positioning. Was pretty isolated in the second half, but still caused problems almost every time he got near the ball. If Lukasz Fabianski isn’t sharp, scores more than just the one goal. Elsewhere, it was good to see Wilfried Zaha up and running on the wing, where he’s at his best.