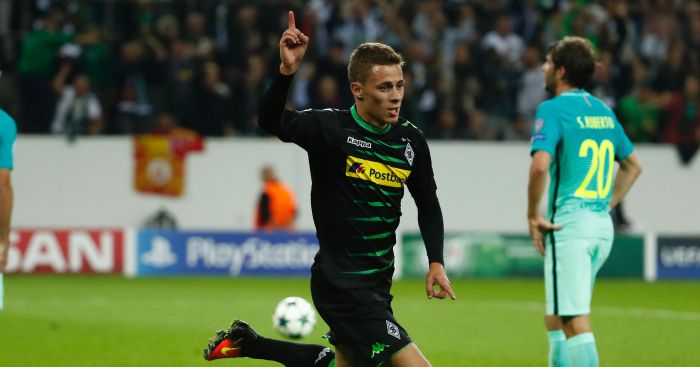 Borussia Moenchengladbach midfielder Thorgan Hazard and Max Eberl have both denied there is a buy-back clause in the player’s contract following his move from Chelsea.

The Belgium international joined the Bundesliga side in 2015 from the Blues after a successful loan spell the previous campaign.

Hazard, the younger brother of Eden, didn’t make a single appearance for Chelsea during his time at Stamford Bridge but his recent good form for Gladbach has led to rumours of a clause inserted in his contract.

“To be honest, I am not aware of this repurchase option,” Hazard told German publication Express.

Eberl, the director of sport at Gladbach, said: “There is no clause. But we do not need to make any secrets. If we get such a player from Chelsea, then Chelsea always has the possibility to think about that player.”

And Hazard admitted recently that he expected to leave Chelsea on his arrival at the club back in 2012.

“I knew I would not stay at Chelsea when I signed for them,” Hazard told Belgian newspaper Het Nieuwsblad over the weekend.

“It was a great opportunity to join such a big club, but I knew I needed regular playing time to show what I could do.

“Chelsea like to buy young players and then slowly get them ready. All the young players like Kevin De Bruyne, Charly Musonda and Romelu Lukaku were shipped out on loan. You need regular playing time at that age.

“Maybe Chelsea now regret their decision not to give De Bruyne and Lukaku more chances, I don’t know.”