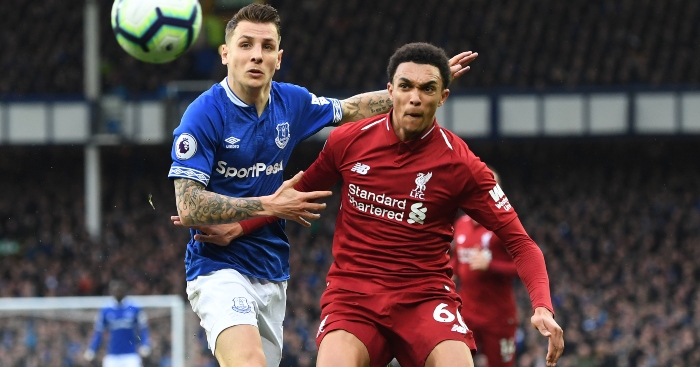 Will Ford’s piece on Man Utd’s 1990s throwback Aaron Wan-Bissaka has generated plenty of debate, while the Mailbox this morning countered an argument that Andrew Robertson is the best left-back in the world by suggesting the Liverpool defender isn’t even the best on Merseyside.

So which full-backs have been the most creative? Here are the ten that have created most chances from open play since the start of last season. Wan-Bissaka was 23rd…

10) Jonny (Wolves) – 37 chances from open play
For 44 games since the start of last season, the Spaniard has been flying up and down the left for Wolves as a wingback with the insurance of a back-three behind him so perhaps he should be higher on this list. Jonny has only one assist and two big chances created among his 38 overall. He’s scored twice the number of goals as those he’s created.

8=) Sead Kolasinac (Arsenal) – 38 chances from open play
Only the top three defenders on this list have created more big chances than the Arsenal left-back’s 11, and that trio had the benefit of playing in at least six extra matches. Kolasinac doesn’t rely on throwing in crosses – the top three here average 332 crosses whereas the Serbia defender has delivered only 66. Despite that, with six, he has only one assist fewer than Digne.

8=) Cesar Azpilicueta (Chelsea) – 38 chances from open play
There is a debate to be had among Chelsea fans whether Azpilicueta deserves his place in Frank Lampard’s side but the skipper can always point to his stats, as well as his versatility. The Spaniard has laid on seven goals for Chelsea, most seemingly for Alvaro Morata. Perhaps he was the only player willing to pass to the struggling centre-forward…

7) Matt Doherty (Wolves) – 39 chances from open play
Wolves are nothing if not balanced. Doherty on the right has created two more chances than Jonny on the opposite flank but the wing-backs are tied on a single assist. At least Doherty has weighed in with five goals of his own, though no defender in the Premier League has had more attempts.

6) Marcos Alonso (Chelsea) – 40 chances from open play
Like Azpilicueta, Alonso has a job on to justify his place in the Chelsea XI. Alonso has come under pressure from Emerson this season and most of his five starts have come while the Brazilian has been injured. Unlike Emerson, at least Alonso can claim to have made an assist – two in fact – this season.

5) Ricardo Pereira (Leicester) –  42 chances from open play
Only Liverpool could make a justifiable claim to have a better full-back pairing then Leicester so it is perhaps no coincidence that those are the two sides highest in the table. Pereira has six assists to his name since the start of last season and just less than a quarter of the opportunities Pereira has created have turned out to be big chances.

'Jonny Evans raves about Ben Chilwell to me'

Darren Fletcher thinks the #LCFC left back will be first choice for England for years to come.@StatmanDave has the stats to back up the praise.

4) Ben Chilwell (Leicester) – 49 chances from open play
For a defender who many feel can offer more going forward, Chilwell is doing well to hide his supposed limitations. Creatively he his certainly pulling his weight, though with only one goal to his name (the first in the 9-0 at Southampton) perhaps there is room for improvement with his goalscoring, Regardless, now is surely the time to bench or bin Danny Rose and give Chilwell an extended run in the England team.

2=) Lucas Digne (Everton) – 55 chances from open play
For all the praise showered upon Alexander-Arnold, Digne deserves great credit for keeping the creative pace with the Liverpool right-back. Digne has matched Alexander-Arnold from open play and created even more opportunities when you factor in set-pieces. With his devilish delivery from the left, Digne has laid on 102 chances overall. Despite having swung in 394 crosses – 56 more than anyone else – Digne’s crossing accuracy is better than anyone on this list. If only Everton had a centre-forward good enough to regularly make the most of them.

2) Trent Alexander-Arnold (Liverpool) – 55 chances from open play
Unlike Digne, Liverpool’s playmaker on the right has the benefit of playing with strikers capable of making the most of the opportunities he creates, but Alexander-Arnold has is still fulfilling his brief to service the front three. Only Robertson can match the England full-back for big chances created and the pair are tied on 15 assists each since the start of last season, more than double the tally of any other defender. Now to sort out his defending. Is there any way Gareth Southgate can somehow fuse his attacking prowess with Wan-Bissaka’s timing in the tackle?

1) Andrew Robertson (Liverpool) – 62 chances from open play
Robertson is certainly more of the full package than Alexander-Arnold and it is hard to find fault in the Scotsman’s game. Robertson defends resolutely before bombing forward to create more chances and assists from open play than any defender since the start of last season. The bargain buy from Hull is crucial to Liverpool’s system, which makes a lack of cover and a persistent niggling ankle injury all the more worrying for Jurgen Klopp.