Home Home Page Front Page No Liverpool or Spurs in our team of the week, but… 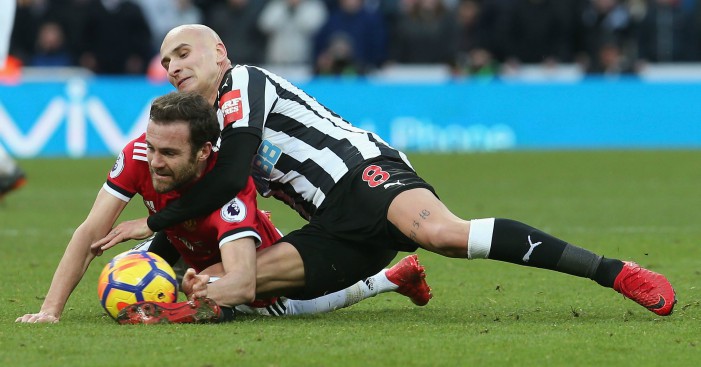 There was excellence all over the pitch this week, and best of all a host of new names, with eight out of eleven making their first appearance. The only positions without standouts were full-back and wing-back, so it’s a narrowish 3-2-3-2:

Goalkeeper: Martin Dubravka (Newcastle United)
How many puns on “ears” do you want? [Zero—ed.] Okay, let’s talk about the most remarkable Premier League debut in many many moons. Not only was he great, he was great at so many things. He came charging out of the area to clear. He came off his line authoritatively to catch and punch. He saved low by sticking out a leg against a placed shot, and higher with a parry against a power shot. He got off his line quickly to smother just before an attacker arrived. Finally, at the death, he made a quick reaction save after the ball changed direction late. No, I didn’t forget that he came out ineffectively on the Sánchez chance. But under the circumstances, it’s the tiniest of blemishes. Petr Cech had his best game of the season for Arsenal, but he’s a distant second.

Centre-hal: James Collins (West Ham United)
Last year I gave him the accurate but unimaginative title of King of Clearances. After this weekend we’ll have to make it Grand High Exalted Mystic Ruler or something. Just the 19 against Watford, and pretty much all of them were significant and powerful. He’s not the most versatile defender—as is his wont, he got caught out once when charging forward—but when circumstances are right, there’s no one who can get rid like Ginge.

Centre-half: Zanka (Huddersfield Town)
Not as many interventions as some, but excellent positioning and anticipation. In the first half he also added some very good passing, both short and long. He’s not a polished defender, and at times looks as if he’s playing it by ear. Even in this, his best performance of the season, he didn’t always look confident. But he got the job done, and he’s very slowly improving.

Centre-half: Lewis Dunk (Brighton & Hove Albion)
I’ve slated him for trying to make the spectacular play and getting caught out, and sure enough it happened once against Stoke when Shane Duffy needed to cover. But this time Dunk also made a variety of fine plays other defenders might not have made. Was also very strong in the air. Has been on the list before, but I rated him just a touch ahead of the rest of the field. I didn’t dock him for the possible penalty on the Charlie Adam rebound, because it was a very close call—and if it wasn’t a penalty, then it was an amazing, if slightly lucky play. But if you’re sure it was a penalty, drop him and pick one from the roll of honour below.

Other notable performances came from the Newcastle pair of Jamaal Lascelles and Florian Lejeune, and the aforementioned Shane Duffy. (Duffy somehow out-clearanced Collins with 20, which I find unbelievable, but he’ll have to do it more often to dethrone the G.H.E.M.R.) Davinson Sánchez was in the running until his late mistake let Lacazette through for a possible equaliser. Cesar Azpilicueta had two epic clearances amid his usual solid game, and of course Jan Vertonghen, rapidly becoming my favorite player, showed his class.

A few full-backs and wing-backs deserve mention. Hector Bellerin, playing much more solidly than usual, mostly shut down Son Heung-Min. Charlie Taylor of Burnley had a steady defensive match, and Ezequiel Schelotto of Brighton had a rather spectacular but erratic one. Ryan Bertrand and Victor Moses showed their attacking chops, and Cuco Martina, for a wonder, actually looked like a left-back.

Deep Midfielder: Mo Diamé (Newcastle United)
A colossus. One of the finest DM performances of the season. Superb positional discipline. Made practically every play, both tackling/intercepting and passing the ball forward. So good that he’s here despite the unforgivable sin of nutmegging Juan Mata. In the distant past he’d been considered an attacking midfielder, but he left no doubt that this is where he belongs.

Deep Midfielder: Jonjo Shelvey (Newcastle United)
As Ray Stevens so memorably sang of Santa Claus, “He’s everywhere! He’s everywhere!” Shelvey is more Dr. Evil than Father Christmas, but after last Sunday he should be called anything he wants. He did his deep-lying playmaker thing, and added the kind of defence you almost never see from him. Got stronger as the game went on, too. Like Diamé, disciplined to the max—when was the last time you heard that word applied to Shelvey? And I thought he’d be behind Mikel Merino in the pecking order…

Mousa Dembélé had a decent first half and an excellent second half against Arsenal, doing all the things we know he can do: power dribbling, close control, sure passing (96.6%!!). I actually rated Shelvey and Diamé a tiny bit higher, and they’d win out on the tiebreaker anyway, but it was an impressive match.  Jonathan Hogg also had one of his best showings for Huddersfield.

Right Winger: Theo Walcott (Everton)
After watching Everton-Crystal Palace, I put a big star by Walcott’s name, plus the phrase ‘no goals, no assists, clear man of the match’ – then Sarah goes ahead and scoops me. Journalism, bl**dy hell. Most impressively, the performance was only about 1/3 traditional wing play. He often played inside-right, on a line with the edge of the penalty area. More good manoeuvres went to the middle than to the by-line. He also showed plenty of instinctive tactical awareness, passing and moving both directly and from back to goal. Sam Allardyce isn’t exactly an attacking genius, but he knows how to set up a team with clear roles. It looks as if Theo is benefiting from the approach.

Attacking Midfielder: Kevin De Bruyne (Manchester City)
The only thing left to decide about De Bruyne is whether we should call him KFDB or KDFB. Or, since he’s a footballing deity, maybe The Creator. When David Silva isn’t in the side, everything goes through number 17. On the second goal, how many players would even have tried to pass it first time?

Left Winger: Jose Izquierdo (Brighton & Hove Albion)
One of the goals of the season, but that was only part of it. He was also denied twice by Jack Butland, and was the chief threat on the counter when Brighton were defending in the second half, both shooting and creating. Also tracked back and played some good defence, not at all unusual for him. It was really a three-way tie for the third attacker between Izquierdo, Eden Hazard (not his greatest game, but two lovely goals and some typically elegant play) and Aaron Mooy (naturally at the centreof Terrierdom, two very nice assists and could have had another), but Izquierdo won out on the inevitable tiebreaker.

Striker: Sergio Aguero (Manchester City).
We have a standard term for two goals (brace) and one for three (hat-trick), but none for four. I kind of like “foursome,” since four goals are so very sexy. But I’m sure you can do better, and it’s the solemn duty of all F365 commenters to invent one and make it common parlance. Oh, almost forgot about Aguero. A bewildering display: run and tap-in, dribble and shoot, pounce and dink, blast. Can’t wait for the Champions League.

Striker: Steve Mounié (Huddersfield Town)
An instant legend after his opening day goals, he swiftly dropped from sight, seemingly bereft of confidence, skills, and even application. But he’s back, and not before time. A truly stunning centre-forward performance against Bournemouth: he bullied defenders, was dominant in the air, and delivered two of the most clinical finishes you’ll ever see. Most remarkable was the way he left Simon Francis for dead at the by-line and laid on the first goal for Alex Pritchard. By the way, as of this writing, Whoscored has Mounié’s second goal as an own goal for Steve Cook, although the ball obviously went straight in without touching a defender. Is someone trolling Daniel Storey?

Roberto Firmino and Mo Salah combined for two glorious goals, but Mounié had the more complete match, and would have made it on the newbie tiebreaker anyway. Somewhat lost in all the brilliance was Oumar Niasse, who had his best game as a Premier League striker. Was aggressive on 50-50 balls, delivered some fine link-up play, gave Gylfi Sigurdsson a neat layoff for the first goal, and scored one himself. He’s always been good at taking up dangerous positions: watch on his goal how he’s right where he needs to be when the cross comes in.