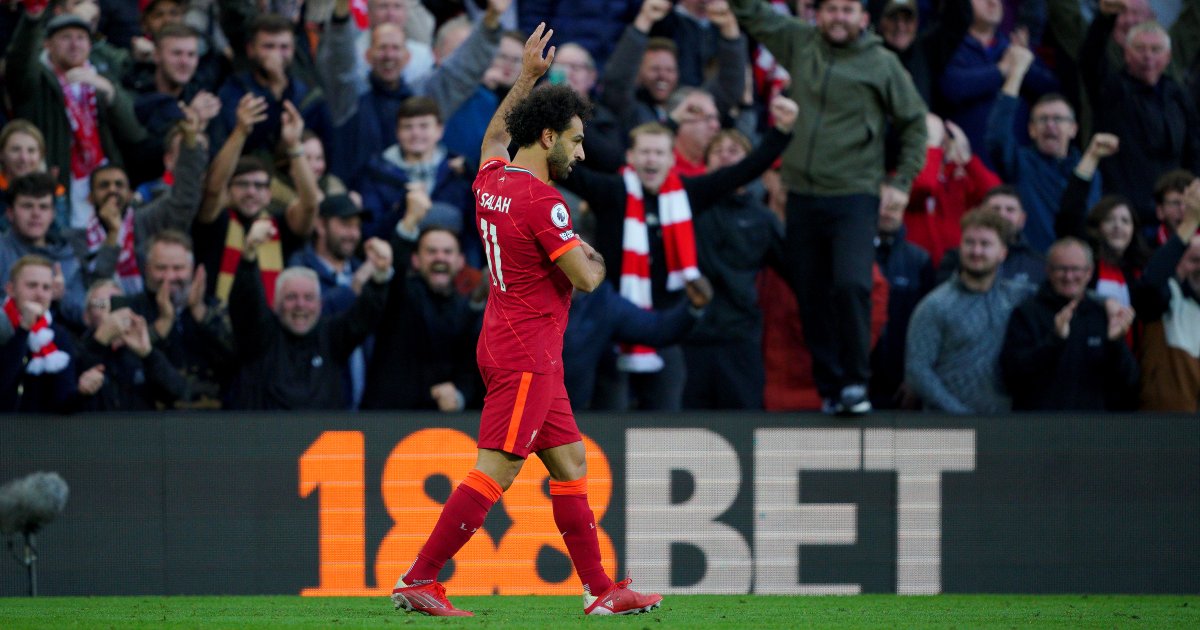 Mo Salah continues to be both widely underrated and the undisputed best player in Europe.

The spits
Call Mediawatch old-fashioned but when two of the Premier League’s great teams meet each other on a Sunday and draw a thrilling game 2-2 with the equaliser coming in the 81st minute, you should reasonably expect the equalising goalscorer’s name to appear on the back page of the nation’s biggest-selling newspapers on Monday morning.

Are we all now so blind to the football and in thrall to the narrative that Kevin De Bruyne scoring an equaliser at Anfield was one of the least important things that happened on Sunday?

The Sun – who have spent the last two Mondays denigrating Liverpool by declaring them dirty and wasteful – go for ‘SPITTING MAD’ on their back page, focusing of course on the alleged actions of some Liverpool fans (everybody needs a hobby) and never once mentioning that De Bruyne scored the equaliser for City. Indeed, Charlie Wyett’s back-page story does not even reference the final result of the match, though he does find space to detail that Liverpool fans attacked a Manchester City bus in 2018. Priorities and all that.

The Daily Mirror also lead on the ‘spitting’ controversy, though they concede that this was ‘an absolute classic’ and feature an image of De Bruyne celebrating with his teammates, so we do at least know there was an actual football match amongst the saliva.

Over in the Daily Mail, they do reference a ‘pulsating 2-2 draw’ on their back page but there is literally no mention of any of the goalscorers bar Phil Foden, and only then because the spitting is alleged to have taken place shortly after the goal.

David Maddock writes in the Daily Mirror that ‘there cannot be a more dangerous striker in the whole of Europe right now than Mo Salah’, which might come as something of a surprise to Karim Benzema, Erling Haaland and Robert Lewandowski, all of whom have scored more goals than Salah in a major European league this season.

Maddock then goes on to write that Manchester City ‘celebrated with rare abandon, as though they had won a final, not taken a point at Anfield, and it was inspired by sheer relief because they know they dodged a Salah-sized bullet in this shoot-out’.

Or alternatively, City celebrated with ‘rare abandon’ because they have had two away trips to Chelsea and Liverpool in a week and emerged with four precious points. Oh and generally, teams celebrate 81st-minute equalisers like winners. It doesn’t always mean more.

In the Daily Mail, Dominic King nonchalantly declares Salah ‘Europe’s current No 1 player’ as though it could not possibly be disputed and the rankings were calculated with algorithms like in golf or tennis.

Actually, if you do use an algorithm, then that honour would probably go to Erling Haaland or Karim Benzema, both of whom King has watched in every game this season. Obviously.

King relates the news that ‘Salah is currently on a sequence of nine goals in seven matches’ and that ‘had figures been related to you in relation to Robert Lewandowski or Erling Haaland or Lionel Messi, you would greet them with a reverential nod of the head but Salah, heaven knows why, does not trigger the same feelings.’

First, Haaland has scored 11 goals in eight games this season while Lewandowski has scored 13 goals in 10 so there is no doubt that they have at least matched Salah’s exploits in front of goal.

And second, who are all these people not giving respect to Salah? Who is hearing that the Egyptian has scored nine goals in seven matches and shrugging their shoulders? Who are these people and are they made entirely of straw?

Take a vow
If we were to tell you that ‘Mohamed Salah makes Premier League title vow after Liverpool draw with Man City’, would you expect him to have made an actual vow? Like an actual ‘serious promise or decision’?

Let’s take a look at what he said…

“We really wanted to win this one but we’re still in the game. We’re going for the title and we have what it takes.”

It’s nailed on. How are Liverpool still 5/1 for the title after that ‘vow’?

Disruptor
‘Liverpool and Mohamed Salah locked in contract dispute with star’s career plan ‘disrupted” is a naked attempt by the Express website to claim Salah hits as he trends.

Never mind that the ‘disrupted’ claim comes from Miguel Delaney in the Independent and is entirely related to Real Madrid signing Eden Hazard in 2019 and ‘disrupting’ Salah’s plans to replace Cristiano Ronaldo.

The ‘disruption’ is not on this occasion from Liverpool. Though actually…

Crack job
What a paragraph from Mark Irwin in The Sun in his match report from Chelsea’s win over Southampton that takes the Blues top of the table:

‘When it was put to him that just maybe he was beginning to crack up, Tuchel asked: “Do you think I would have behaved any calmer if we had won at Juventus?’

It’s not clear whether it was Irwin who asked the question himself, but who the hell does ask a Champions League-winning manager who has just taken his team to the top of the Premier League table whether he is beginning to ‘crack up’? English ‘football’ journalists, that’s who.

No Stones unturned
It’s unclear what is more ridiculous about The Sun website‘s ‘exclusive’ that John Stones’ partner has re-posted anti-vaxx messages – that a) that they can claim an ‘exclusive’ even while reporting that Olivia Naylor has 45,000 Instagram followers or 2) that anyone considers this news, never mind bloody football news.