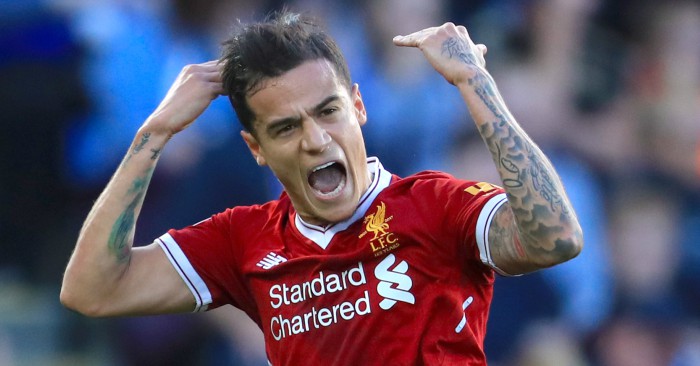 The best thing about this feature is that it forces me to watch more football and watch it more carefully. As a result, I learn about the nuances of individual performances and the game in general, and hopefully can pass some of that on to the reader.

But one thing I’ve learned that isn’t terribly nuanced: there seems to be a dearth of good full-backs and wing-backs these days. Last week no left-sided defensive player turned in a significant performance, and this week neither left-sided nor right-sided impressed. But there were some very fine attacking showings, unfortunately by players you’d expect. We end up with a somewhat ridiculous 3-1-4-2, but who’s to say Pep Guardiola hasn’t played something like that?

Goalkeeper: Jordan Pickford (Everton). Nothing close to a top performance this week, mainly because few keepers got the chance. The keeper who did the best things, Simon Mignolet, also did some of the worst. Pickford had little to do, but saved well from Jermain Defoe when a goal might have meant the game, and claimed once authoritatively when Bournemouth were pushing for a late equaliser. Let’s hope for better next week.

Centre-Half: Cesar Azpilicueta (Chelsea). There are many Davids, but only one Dave. Out of nowhere he’s become the most incisive passer among back-line players. His career high for assists in a season is four; this year he has four already, and every one a peach. But of course he wouldn’t be on this list without his defence. It wasn’t absolutely letter perfect – against Xherdan Shaqiri and Max Choupo-Moting that’s hard to be – but so many times in so many ways he did exactly the right thing. Most defenders are better at certain tasks than others: Azpilicueta does everything at an equally high level. (okay, he’s not great in the air. But so far this year his aerial percentage is his best ever.)

César Azpilicueta to Alvaro Morata: Is the most prolific assist-to-goalscorer combination in Europe's top 5 leagues this season (4 goals) pic.twitter.com/jKRh9kNZ5S

Centre-Half: Winston Reid (West Ham). I’ve always thought of Reid as the poor man’s Laurent Koscielny: a cultured defender who never made the definitive step up to the next class. At his best he adds steel to the culture, and avoids his recurring silly mistakes. He was excellent against Spurs, dogging Harry Kane where possible, clearing with power, intercepting neatly, passing effectively. Kane beat him once to his right, but he had forced the striker wide enough so that Kane could only hit the post. He obviously tired in the final minutes, but did more than enough to make the list.

Centre-Half: Christopher Schindler (Huddersfield). From now on I’m going to call him The Counsellor, because he makes so many interventions. He can be spectacular to watch, which isn’t always a good thing. He gambles a bit too much and can get pulled out of position. But when he’s on, he’s on. I don’t like to rely too much on stats in this column, but have a gander at his numbers against Burnley: six tackles, five interceptions, 11 clearances. Occasionally he gave too much space to Chris Wood, and yes, once he came out too far and got beat. But what a show.

Genuinely. Is there ANYBODY that doesn't want to sleep with Christopher Schindler? Asking for a friend…

Eric Bailly got high marks from a lot of people, but I watched that game closely twice, and it wasn’t a great performance. A lot of good clearances (and a few not so good), but several times he got outmaneuvered by Shane Long (!), and froze solid on the one good chance Southampton created. He’s likely to be a great centre-half some day, but he’s still learning. Jan Vertonghen had a very good first half, but wasn’t really tested in the second.

Deep Midfielder: Mark Noble (West Ham). It feels good to type that name. The Man Without An England Cap rolled back the years against Spurs with a classic all-action performance, easily his best in many moons. Whatever you can do in midfield, he did. His passing, the one part of his game that has improved in recent years, was particularly impressive. He was in traffic all game, but among the Hammers only Reid recorded a better completion percentage.

Elsewhere, Grzegorz Krychowiak was Pulis-powerful, had an eye for the interception, and contributed more than expected to the attack. On the other side of the ledger, he had to foul a bit too much, and was bypassed a few times. Mario Lemina had his second straight good game, although he wasn’t quite as effective pushing forward as last week. Steven Defour has been Burnley’s best player so far, and had another effective two-way match.

Left Attacking Midfielder: Leroy Sané (Manchester City). Really a winger, of course, but here for symmetry’s sake. Marooned on the right for roughly the first half hour, he kept trying things that wouldn’t come off. When finally moved to the left where he belongs, he did all the things he does so well: running behind defenders, combining with players in the inside left channel, sending in crosses low and high. Is there a smoother-looking player in world football?

Central Attacking Midfielder: Philippe Coutinho (Liverpool). Not much to say here (and plenty was said in Winners and Losers). A very good player doing very good things. Watching the game over, I was struck by his body language: decisive in every move. Barcelona could use him.

Central Attacking Midfielder: Christian Eriksen (Tottenham). A difficult choice between Eriksen and Raheem Sterling. Two fine goals for Sterling, and he seemed at home in the middle rather than on the wing. But the rest of the match he was unremarkable, and he had the bad luck to be removed early. Eriksen played at a more consistent level for longer, and was fortunate to find himself in a fairly open match where his passing skills could show to best advantage. Don’t forget his finish too, which looked as natural as anything by Harry Kane.

I wanted very much to include Jordan Ayew, who had a fantastic second half at the point of a diamond for Swansea. But the first half he barely figured, and the bigger names played too well to ignore. Tom Carroll had a good second half for Swansea as well.

Right Attacking Midifelder: Dusan Tadic (Southampton). An elegant player, erratic but capable of genuine brilliance. Played both from the right and in the middle, and completely ran the show in the second half. With Manchester United packed in, he pushed and probed and finally delivered a through ball that could have meant the equaliser. But unfortunately the chance fell to Oriol Romeu, who wasn’t the most likely to finish.

Dusan Tadic would be a great replacement for Ozil #Arsenal #COYG

Striker: Harry Kane (Tottenham). A strange outing. He was frankly poor for the first thirty minutes, losing possession, unable to slip his markers. Then came two quick goals, one on a header that was by no means easy, and one on a quick reaction that many players would have botched. And with the game opened up, he was Harry Kane again, the most versatile striker in the world. As a bonus, he hit the post from a free kick, and in the ensuing sequence, Spurs scored their third.

Striker: Alvaro Morata (Chelsea). Coming up to the 77th minute, he wouldn’t have made this list. A nice early goal, but otherwise inconsistent: some good link-up play, some not so good, an effective move here and there, a bit too easily marked. Then came goals two and three. The finish on the second goal was breathtaking: running hard from the left, yet flicking it over the advancing keeper with the right. The third was less spectacular, but required nearly a full stretch. Not bad for a guy who was Chelsea’s second choice this summer.