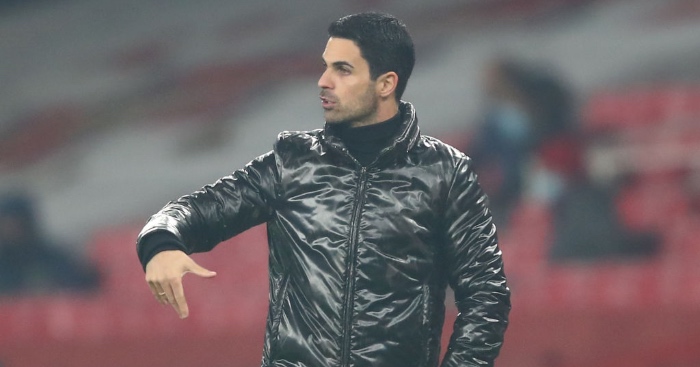 Arsenal’s 3-0 defeat against Aston Villa last week was a performance so torrid and abject it almost reminded you of those despairing last days of Unai Emery.

They call it the ‘Arsenal of old’ as a way of verbally disassociating that team from this one. But perhaps they’re closer than many might like to believe.

Following such a terrible display you would imagine most Arsenal fans would have their heads in their hands, all sunken by the nagging possibility that, maybe, not all that much has changed over the past year.

Some were maybe even considering what could be deemed greater alternatives to the Spaniard, with Mauricio Pochettino’s recent TV appearance on Sky Sports stirring some internal perfidious desire within.

As Arsenal saw last season’s relegation strugglers put the ball in their net four times – three of which counted – even the staunchest Arteta supporter must, at some moment after the final whistle, have pondered whether the figure in the dugout frowning amid the autumn rain was really the right person to lead them forward.

Even now, as the subsequent emotions of the game have subsided and some clarity has ensued, some pertinent questions still remain.

Just why was Pierre-Emerick Aubameyang playing on the left side again, despite only scoring two goals in eight games in that position? Why wasn’t he switched within the game when he failed to register even a single shot on target? What has happened to Alexandre Lacazette? The collective trio of Bukayo Saka, Aubameyang and Nicolas Pepe appear the most obvious choice, so why is that a combination that has not even been trialled this season?

These are fair inquiries, and ones you would suspect – and hope – Arteta will be asking himself as he licks his wounds during this international break.

Their failure to create is a glaringly obvious issue. A number of unflattering stats, now all quite well-known thanks to the vigorous application of teenagers with Harry Kane in their avis recycling them online, show Arsenal have not scored from open play in the Premier League for six hours now (another way of saying four games), with their last being against relegation-threatened Sheffield United last month.

The fast transitions in the final third are faltering, both out wide and through the middle. Hector Bellerin has yet to build a working relationship with Pepe on the right flank, seemingly unsure whether to go inside or overlap; their expected goals have remained under 1.0 in the league since their first two games; they have scored just nine times so far this season in the Premier League, the fewest at this stage of a season for 22 years; but most pivotally, Arsenal do not have a man who falls into the league’s top 25 highest creators. Mesut Ozil’s return into the public forum hasn’t come through Arteta, but instead by way of a string of bizarre tweets, cheering on his beloved side like those retired club legends who disingenuously whip up popularity before their new book release.

But away from such frailties in attack, the most worrying aspect of their last league performance was just how Arsenal echoed their former selves: that gutless, empty side which, despite possessing boundless quality, especially in attack, was never able to show any guile or fortitude to mount a serious challenge, often seen to collapse in the face of any form of adversity.

So you can see why some have been quick to call out the manager, especially amid the onslaught of rival coaches such as Ole Gunnar Solskjaer and Frank Lampard from the media during their respective plights. Whether such criticism is deserved is another matter. The troubling problem in banding the group together is that you’re suggesting that, like the others, Arteta was given the role through some misguided loyalty. The only similarity they have is that the trio shares the trait of being relatively young and have played for their respective clubs within the last 15 years.

READ MORE: Why is Arteta rated highest in the DNA brigade?

Arteta’s appointment was born more from pragmatism than anything else. He spent three years under the wing of one of the most revolutionary tacticians in modern football, and even wanted the job in 2018 but was rejected as Arsenal opted for Emery.

In that sense, he was chosen for the ability he has to offer – something which he has already shown through winning major silverware in such a short space of time at the club. There is, too, clear thought behind his approach to tactics and formation, a certain blueprint. Even attempting to forge an identity brings more promise than merely grinding out results and not losing, something Newcastle fans can attest to.

Of course, these things take time. Dynasties aren’t forged in hours. It is all a process and this often means having stumbles, whether that’s regarding tactics or having the players understand their roles. Even in his second year of managing Southampton, the now hugely admired Ralph Hasenhuttl found himself winning only two of their first 12 games of the season, a period in which they endured the Premier League’s biggest ever home defeat, a 9-0 mauling from Leicester City. Last weekend, they found themselves top of the table.

— Out Of Context Football (@nocontextfooty) November 8, 2020

Sluggish performances and half-hearted individual displays have hampered Arsenal for so long that it’s almost embedded in their culture. There will always be feet dragging and casualties when you try to overhaul a system entirely, especially when you’re trying to eradicate the confusing and muddled formula of Emery, a coach who switched formations within games too many times for the players to keep up. It takes more than a small pair of tweezers to delicately remove it and put it aside; it needs a vigorous, sustained approach over a period of time.

There are still clear signs of progress. Arteta has put names like Eddie Nketiah and Joe Willock into the forefront of the squad; rejuvenated Mohamed Elneny, someone before considered a lost cause only roaming the sidelines and taking up wages; his purchases of Thomas Partey and Gabriel appear sound.

And unlike before, the team is able to stand up in big games. They have beaten England’s best team, Liverpool, three times out of four, while their record against the top six overall since Arteta took over stands at seven wins, one draw and five losses. Emery managed two draws and three losses without a win against those clubs the season before.

The issue lies in when they play the ‘lesser’ teams, in games where they should be controlling the tempo. Last week’s display was a phenomenal example and hopefully a nadir from which they can climb.

No doubt the way his side downed tools against Villa’s exquisite trio of Jack Grealish, Ross Barkley and Ollie Watkins, does warrant slight concern and shouldn’t be easily discarded. But Arsenal are surely not yet at the stage where we should slam down on the panic button, bring out the banners and have slightly famed individuals known via their initials yell into a camera for YouTube.

But there must be a reaction to these types of abject performances. He must not compromise his system of a 3-4-3/4-3-3 hybrid, a formation which gels so smoothly in some aspects, but also put more faith in his players and not ask everyone to crowd into the box when having to defend, as was the case too often against Villa.

Despite not having so much of a shared bond with his club as Lampard and Solskjaer, Arteta is still fortunate to be working at a time when there is a bit more patience among fans, perhaps owing to the rise in our understanding of tactics and game plans. Now we’re able to forge our own opinions based on a wide-ranging selection of information and statistics which was not available before. We’ve become more patient with young, new managers, who possess their own particular quirks, knowing that transition requires time and hiccups are part of the process of building for the future.

And as such, Arsenal fans still have their faith in Arteta, despite the clear flaws manifesting in recent performances, and will ignore the easy comparisons coming out of nothing but consequential timing. It’s only the very best who are able to pull out of these inevitable moments of adversity stronger than before. Now’s the perfect opportunity for Arteta to do just that.