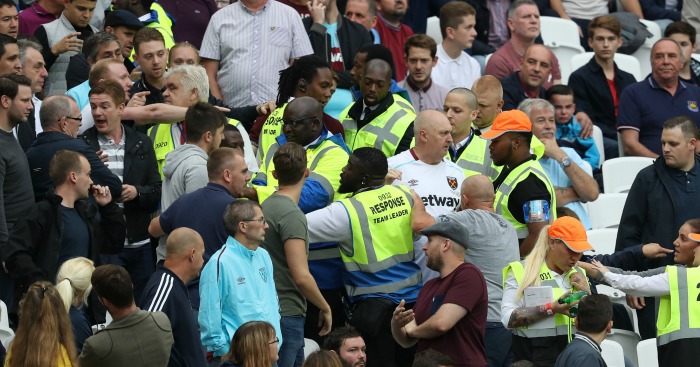 The London Stadium won’t have police inside the ground for West Ham’s next home game because there is no satisfactory radio system installed.

Following the crowd trouble during West Ham’s 4-2 defeat to Watford on Saturday, the club were hoping that there would be a police presence inside the stadium for their next match against Accrington Stanley in the EFL Cup on September 21.

Despite ten supporters being ejected from the stadium during the game against the Hornets, the Metropolitan Police Service’s deputy assistant commissioner Peter Terry says that without a “satisfactory radio system” there will be no extra policing.

“The stadium operators are responsible for the safety and comfort of their customers and staff. This includes disorderly behaviour that has not reached the level of criminality,” said Terry.

“The Metropolitan Police Service will fulfill its legal responsibilities in relation to dealing with matters of criminality.

“The MPS is not able to provide Special Policing Services at this time as it would normally, as there is no satisfactory radio system across the ground.

“During this time, the MPS had spoken to the stadium operators several times to highlight the consequences of not installing such a system.

“Until there is comprehensive Airwave radio coverage throughout the ground, officers will not be routinely deployed within it under a Special Services agreement. The stadium operators have only very recently agreed to install a satisfactory radio system.”