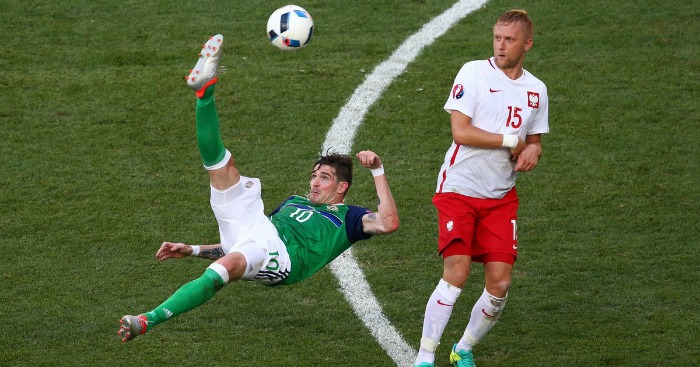 In the 24 hours following their 1-0 defeat to Poland, you will hear and read various adjectives used to describe Northern Ireland: Brave, valiant, battling. What you probably won’t hear or read too many times will be words like accomplished, organised and focused. What Michael O’Neill’s men did in being beaten 1-0 was not brave; it was close to tactical perfection.

When the half-time whistle blew, Northern Ireland were drawing 0-0 with a Polish side boasting one of the most terrifying front sixes in European football. They had limited them to a handful of chances and Michael McGovern had been forced into only one notable save. Robert Lewandowski had not had a single shot – not helped by a Polish side playing into Northern Ireland’s hands by attempting 23 crosses against what looked at times like an eight-man defence.

The statistics provide easy fodder for scoffing – after ten minutes only four Northern Irish outfield players had a pass completion rate above 0%, Conor McLaughlin completed one pass in the opening half, Paddy McNair touched the ball just nine times in 45 minutes despite playing in central midfield – but the important numbers at half-time were a pair of zeros. At that point it was mission half accomplished.

After 51 minutes the class of the Poles – finally attempting to play between the lines even though the gap was minimal – forced a change to that scoreline but there was no collapse from the men in green, who changed shape and began to stretch the game. Yes, there was a lack of quality in the final third, but what more could be expected from a side now boasting a strike partnership that plundered one Championship goal in total last season? The apparently serious suggestion before the game that Steven Davis is to Northern Ireland what Gareth Bale is to Wales perfectly illustrates their dearth of attacking talent.

The fact that they were a set-piece or scuffed finish away from drawing the game in the final minutes was a testament to the hard work and concentration of the previous 85, and justification for defensive tactics that kept them in sight of that chance.

BBC pundits said at the end of the match that the Ulstermen looked more dangerous when they switched to 4-4-2, with the implication that they should have taken on the Poles. But would they have been 0-0 after 45 minutes if they had tried to take on a superior attacking unit? Would they have been just 1-0 down after 80 minutes and still keeping their fans in the kind of high spirits that will give them hope for their clash with Ukraine?

This was the sixth game of a so-far-excellent tournament and Northern Ireland can be proud that they were not the first team to be beaten by more than one goal. And that’s not testament to bravery or valour, but playing to their strengths. If they were as lucky as Russia on Saturday night, it could have earned them a vital and unlikely point.