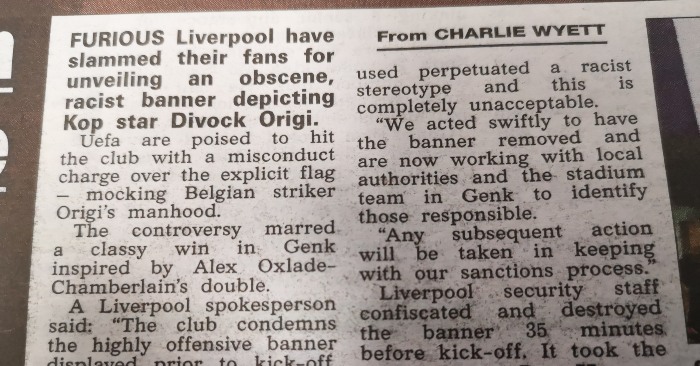 Stand by your manhood
Liverpool won 4-1 in Belgium on Wednesday night but never mind that, some Liverpool fans had mocked-up an image of Divock Origi with a giant penis so The Sun – never shy of piling on Liverpool fans – lead on that furore rather than the actual football. Which is fair. But as you might expect, they make something of a mess of their coverage. It is of course incredibly important to cover racism in football, but it is also incredibly important to cover racism in football with some sensitivity and understanding of the subject.

‘Uefa are poised to hit the club with a misconduct charge over the explicit flag – mocking Belgian striker Origi’s manhood.’

Sorry, what? The banner is not offensive because it ‘mocks’ anybody’s ‘manhood’. That’s not how racism works. Nobody actually thinks Origi has a penis down to his ankle. Except maybe The Sun’s Charlie Wyett.

Perhaps the words ‘perpetuating racial stereotypes’ are just too confusing for Britain’s best-selling newspaper? Which is odd as they really should be experts on the subject.

Of course, the real story would be if Ole Gunnar Solskjaer was planning to completely ignore Uefa’s three-step protocol.

Snubstation
“He is the biggest talent in the world right now but it’s important that he stays at Dortmund to continue his development, because here he can play in the Champions League,” is what former assistant coach Jorg Heinrich has told Goal this week about Jadon Sancho.

Did Heinrich mention any particular clubs he should snub? Of course not. Does that matter? Does it balls.

So far, so ‘according to reports’. But then there’s this…

‘Mauricio Pochettino ‘looking to inject energy into Tottenham squad with Max Aarons, Nathan Ferguson and Bruno Fernandes ALL on his radar in January”

Mediawatch stands with Mail journalist Adrian Kajumba, who wrote his own, sourced piece about Tottenham’s January plans, only to see his employers sell it as a chop job. Some habits are obviously hard to break.

Keeping up with the Jones’
We could spend all day raging about the trend of using quotes from ‘fans’ on Twitter to drive traffic to supposed ‘news’ stories. It’s everywhere.

‘Arsenal fans think Ozil has ‘finished Emery in one tweet’ after pair’s tense training ground chat’ is the latest example on The Sun. It’s infuriating and it’s shit. But it’s just about okay as long as it’s signposted.

But then you get this from the Daily Star website:

And that quote – ladies and gentlemen – is not from Jurgen Klopp, Firmino himself or even from a pundit, but from an unnamed person on Twitter.

‘”Nearly the greatest assist you’ll ever see from Firmino,” said one.’

One what? Person? Fan? Bot?

Nearly the greatest assist you’ll ever see from Firmino.

They did *what* in the square? pic.twitter.com/BLjTkvXzas

Pretty sure that momentarily tickling a man’s balls through his shorts is basically a 12.

Recommended reading of the day
Jacob Steinberg on Christian Pulisic