Home All The News No timescale for Sunderland takeover; Big Mick back? 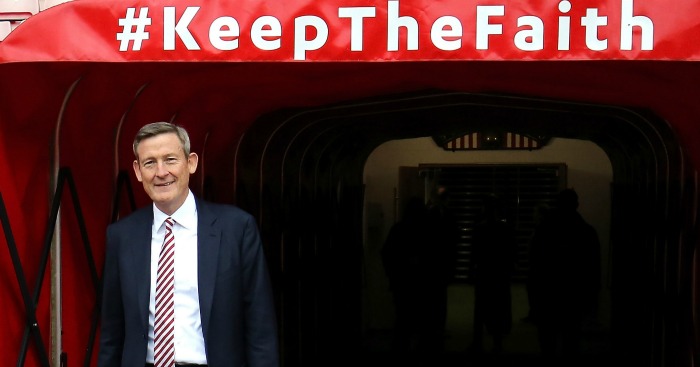 There is no fixed timescale for Stewart Donald’s proposed takeover at Sunderland to be completed.

Current owner Ellis Short announced on Sunday that he had agreed to sell the club to an international consortium headed by the Eastleigh chairman, who in turn is to relinquish control of the National League outfit.

However, the new owners would have to gain EFL approval before the deal could go through and that process could take days, weeks or in extreme cases, months.

The EFL does not comment on individual cases, but its rules require football club owners to provide information about the financial consequences of a change of ownership and “evidence of the source and sufficiency of any funds” to be invested.

In the meantime, first-team coach Robbie Stockdale will take charge for the final Sky Bet Championship game of the season against Wolves on Sunday.

Short has been looking to offload the Black Cats for some time and has paid off the existing debt, understood to amount to in excess of £110million, to pave the way for a fresh start.

While continuing to cover the club’s financial shortfalls, the American tycoon had effectively handed over the running of the business to chief executive Martin Bain, who has presided over a drastic cost-cutting exercise during his time on Wearside.

The departures of manager Chris Coleman and assistant Kit Symons on Sunday cleared the decks for a new charge, and it remains to be seen what role, if any, Bain has to play going forward.

Coleman’s exit after a little more than five months was met with dismay by some supporters, although speculation has been rife over who will replace him with social media sent into a frenzy by pictures of former boss Mick McCarthy in the area over the weekend.

McCarthy, who is available after leaving Ipswich, Sheffield United’s Chris Wilder and Leicester assistant Michael Appleton are among the early frontrunners with the bookmakers, although whoever does eventually get the nod will want to seek assurances over the new owners’ plans.

Coleman revealed days before his five-and-a-half-month tenure drew to a close that he had still never spoken to Short, and was keen to do so to assess the club’s future direction.

Should Donald and his investors receive approval, their mission will be to revitalise a club which has careered out of control as it has slipped from the middle of the Premier League into League One under Short.