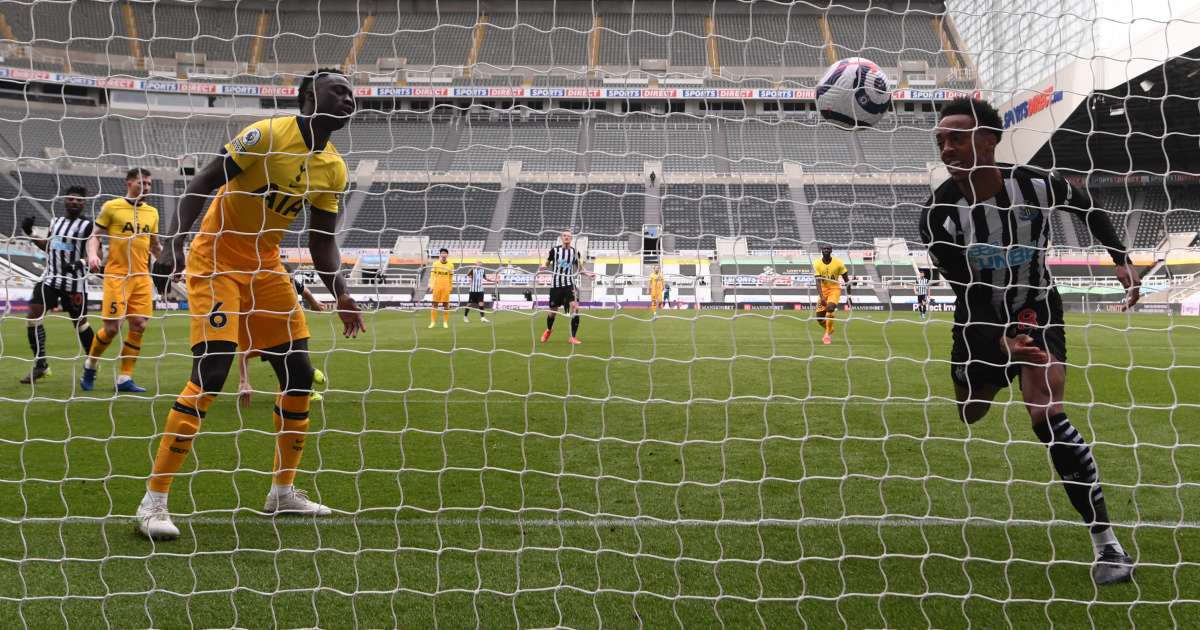 There was never really any doubt that the Misery Derby would produce a game and result that meant neither side was happy.

And it wouldn’t have taken much psychic ability to imagine such an outcome from a contest between the two least popular managers in the division coming about thanks to Spurs leading through Harry Kane late in the game before conceding an equaliser bundled home from an unlikely source – we got pretty close ourselves and we’re rubbish at this kind of thing.

But like everything else about this game, it was heightened to an almost absurd degree. This was a match that took everything about both these teams and turned it up to 11. That, it barely needs saying, is not necessarily going to be good.

The defending throughout was laughably bad. While Harry Kane’s two goals were another obvious reminder of just how lost Spurs would be without him, this was another example of the continued and vital importance of Toby Alderweireld. He was missed terribly here. No longer anywhere near the player he was, Alderweireld remains comfortably Spurs’ best defender and, more importantly, one who drags his team-mates up a level or two. Almost literally. Alderweireld is pretty much always in the right place, and that drags his team-mates into more or less the right places as well. Without him, Spurs’ defence so often looks lost. But rarely quite so outrageously as this, especially against a team as limited as Newcastle. The hosts’ xG today was 4.07. They had 9% of their shots from inside the box for the entire season in this one game.

Newcastle had already missed three clear chances before Spurs presented them with another to take the lead as errors racked up: Japhet Tanganga gave the ball away. Davinson Sanchez failed to clear. Chief firefighter Pierre-Emile Hojbjerg was finally overwhelmed and unable to douse the blaze. Joe Rodon, between a rock and a hard place, couldn’t decide between defending the man in possession or Joelinton behind him. Disastrously, he did neither. Newcastle were 1-0 up and fully deserved it.

But this is Newcastle v Spurs. The movable object against the equally movable object. Anything Spurs could do, Newcastle could match – and within  26 seconds of the restart they’d done it as Kane accepted the donation. Shortly afterwards he made it 2-1 with a goal that was actually quite good, owing more to his precise, powerful finish and Tanguy Ndombele’s cleverly angled pass than it did to any disastrous nonsense from the opposition. In this game, that made it very much an outlier.

This was not like previous Tottenham failures to hold on to a lead this season. They didn’t make the conscious decision to sit on the lead so much as play so badly that it just ended up happening by default, with the same result. Up to you which is worse, but while Jose Mourinho can and should be sacked – Spurs were ugly and ineffective and dull to watch once again and, without the results to make up for it, there really is nothing to be said in favour of Joseball – this was one occasion where his usual policy of blaming the players has some justification. The entire back four was rotten, the forward play for the most part leaden and ponderous. Even Kane doesn’t escape, failing to put the game away when hitting the post at 2-1. There was no 7/10 performance from any Spurs outfield player, and too many 3/10 performances to get away with that.

Which brings us to why Newcastle shouldn’t be happy with a point that, at kick-off, they probably would have taken. Even with the leveller coming so late. Because they cannot possibly have expected Spurs to be quite that bad. Newcastle deserve plenty of credit for forcing the errors and exposing the faultlines in Spurs’ back four, but that’s tempered by their failure to truly take advantage, and their own defensive calamity at the other end. While Spurs have absolutely no case for deserving even a point out of this one, it’s hard to say a Newcastle side that gave away an instant equaliser so shambolically and missed so, so many chances deserve any more than they got.

Newcastle can take some encouragement from the performance, but at this stage of the season such positives are of limited value when set against the hard currency of results. The cold hard fact is that Sheffield United are really the only other Premier League side you can imagine failing to beat this Spurs performance today. As a 90-minute spectacle, it’s hard to think of any game where Spurs have been worse all season long. This was as bad as Zagreb. That Newcastle could only draw, and needed a late goal for that, is no reason to be cheerful.

Ignore the badge on the shirt or the names on the back of them; this was the best chance Newcastle will get for one of the two or three wins they still need to survive. Nobody else will play this badly against them, nobody will give them quite so many chances.

So there it is. Spurs make a mess of a chance they didn’t expect to move into a top-four spot they don’t deserve. Newcastle fail to fully capitalise on the worst possible performance they could have come up against and could still be in the bottom three by the time the day is out.