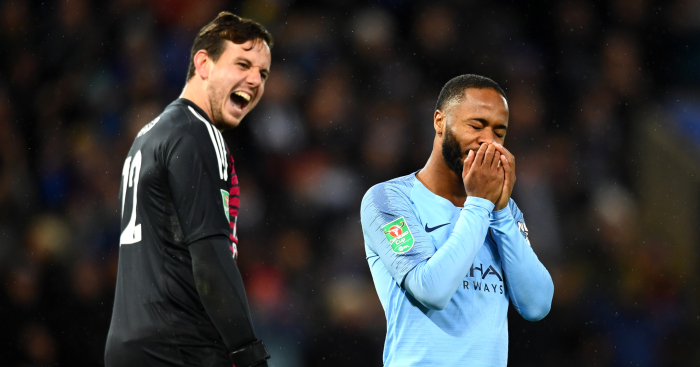 Read our Manchester United Mailbox, then send your thoughts to theeditor@football365.com.

It was disheartening to see that the vitriol towards Raheem Sterling hasn’t changed whatsoever and that we can look no further than the media for the first sign that nothing will change.

In spite of everything that’s been brought up over the past two weeks, the first player mentioned in BBC Sports’ article covering the game? Sterling. Not Zinchenko, who scored the winning penalty. Not Muric, who saved two penalties. Not even Kevin De Bruyne or Marc Albrighton who scored inside the 90 minutes. The first image in the article was not of City or their players celebrating, but of Danny Ward smirking at Sterling. Originally, this was the picture that appeared on the homepage of the BBC Sport site, although I note this has now changed.

The only tweet from the journalist who penned the article (Shamoon Hafez) was of Ward laughing at Sterling. No mention of the result. Nothing.

Yes, his was a poor penalty, and worthy of reporting, but there is no way covering such a detail as the main feature of the article is good journalism, and it is a tired excuse to say that people are more interested in big players.

It would be naive to think that the red tops will change anytime soon, but the BBC is supposed to be impartial, and again while it would naive to accept that truth as well, it certainly shouldn’t be stoking dislike towards someone who has spoken out against racism in recent weeks. BBC Sport (and this reporter in particular) should be ashamed.
Stephen Marfleet

That panenka has just f**ked him in the media for the next ten years.
Stu, Southampton

A fan writes in
I don’t know if you have mandatory drug tests at 365 or not but Ian Watson certainly needs one after writing in his Top Ten Premier League Players of 2018 that Raheem Sterling “has become a complete attacker for Pep Guardiola”. Now Sterling is a great player no one can argue he isn’t but saying he is a complete attacker is completely absurd as he’s nowhere near it.

When you think of complete attacking players you think of the truly world class types like Cristiano Ronaldo, Messi and Suarez because they can score and assist goals in many different ways regardless of the opposition and have been doing it for years. Sterling on the other hand gets most of his goals and assists against mid table sides and relegation candidates then regularly struggles to do much of note except run down blind alleys and miss good chances against top sides that can actually defend. See recent Chelsea game for a prime example, if Sterling was a complete attacker he wouldn’t have missed his chances and City might still be top of the table.

I know at 365 you have this whole SJW thing going on over Sterling and that’s fine, feel free to defend him against racists and unfair press coverage but please be objective about his actual footballing talents as his on pitch flaws are obvious even to the casual observer.

Other than that hiccup I couldn’t really disagree with the rankings and it was a good read.
William, Leicester

Sarri, not Sarri
I feel the “Kante is out of position” dogma (see e.g. the 10 worst decisions of the season) is starting to get out of hand and I have to say I don’t really buy it.

First, Kante never played in the “Makelele role”, sitting back all of the time like some pundits seem to think – he did have some freedom to swarm forward on occasion and used this to good effect, covering a lot of ground up and down the pitch.

It is true, though, that he used to play in a deeper role overall. The reason is that he played in teams with a completely different style of play. When Kante stole the show as part of Conte’s and Ranieri’s title-winning seasons, he was playing in teams who deliberately didn’t play a possession-based game, instead favouring a clinical counter-attacking style.  Leicester famously only had about 45% possession (3rd lowest in the league), while Conte’s Chelsea had the lowest possession of the Big Six teams.

When the opponents are allowed to have a high share of possession, Kante is indeed at his best in a deeper role, hassling opponents in a congested final third and breaking up attacks to quickly initiate devastating breaks. However, in a team like Sarri’s Chelsea which dominates possession, it simply doesn’t make sense to play Kante in such a withdrawn role. He doesn’t have the technique or vision to dictate play from the back and he would have less frequent opportunities to break up attacks in Chelsea’s own final third, given that Chelsea have the ball most of the time.

Therefore it makes perfect sense for Sarri to play him further forward, where he can put pressure on opponents in their own half, make interceptions in dangerous areas, and contribute to our attacking play with his acceleration, agility and directness.

Essentially, anyone who praises Sarri for giving Chelsea a more attacking, possession-based style but criticises him for playing Kante out of position is trying to have their cake and eat it.  You can’t have it both ways. I’d rather Sarri stuck to his principles rather than adopting a completely different style for the sake of one player, especially one who is so humble and ready to listen to whatever his manager asks of him.

AC Milan managed to forge a brilliant midfield partnership with Pirlo as a deep-lying playmaker and Gattuso as the more tenacious presence, the latter usually operating in a more right-sided role and buzzing around opposition players much like Kante does. I don’t see what’s wrong with Sarri trying to replicate that!
James Bruschini, CFC

Sunderland ’til I die
While the world talks about Jose and United, I wanted to draw readers attention to the quite excellent documentary “Sunderland ’till I die” on Netflix. It follows Sunderland from their relegation from the Premier League and the subsequent season in the Championship.

The level of access the makers have had to players, management, staff and fans is incredible. Players like Jason Steele and Jonny Williams are very honest and brave about the impact their struggles are having on their mental health. The staff come across as caring and kind, whilst worrying about their own futures with the clubs financial future. Management are doing their best, not always making the right choices and struggling with Ellis Short’s refusal to invest in players.

But it’s the fans who are at the heart of all of this. We see their hopes at the start of the new season, and how they suffer as the team struggles. We see the ugly side of abuse and violence in the stands, and the documentary makers show the good and the bad.

It’s impossible not to relate, and care for their struggle. It’s their club and it’s been dragged through the gutter. All they want is for the team to do their best, which doesn’t always happen.

I’d really like to recommend this to all readers

A tiny bit of Jose…
Watching the slow collapse at United has been extremely entertaining, but reading through the dozens of letters about Jose from United fans today actually made me sad (not for him I hasten to add).  As a 45 year old Hammers season ticket holder, now living abroad, my favourite ever player is the recently retired Joe Cole.  I’ve never seen anyone with so much natural talent (sorry Paulo) and simple joy for the game.  It turned my stomach to see the recent F365 article on “Best signings from relegated clubs” and truth be told I didn’t even open it.  I knew (am prepared to bet anyway) that Joey would be on there and it still genuinely hurts to think about it.

Joey was blessed with a ridiculous amount of natural talent, and had a fearlessness which meant that he had absolutely no qualms breaking out tricks and jaw dropping skills in any situation, not because he wanted to show people up, but because he was an artist with the ball who could do anything, and so everything seemed possible.  He should have been remembered as one of England’s greatest ever players, I genuinely believe that.  And indeed if you look at his resume you will see 3 Premier League titles, 2 FA Cups, a League Cup, a Champions League runner up and, most importantly of all of course, the 1999 Intertoto Cup…  Not too shabby.

Which of course brings me back to Jose.  As gutted as I was to see Joe leave, and as much as I dislike Chelsea (a lot…) I still looked out for him and hoped that he personally would do well, especially for England.  We all know what happened.  When Cole tried too many tricks, or didn’t track back in a game, he was hung out to dry by Jose, who beat it into him that if he wanted to play he would need to put his defensive duties first and cut out what Jose viewed as needless flair.  Mourinho ruined what should have been the brightest English player of his of any other generation.  For those of us who say him grow up on the pitch it was sickening.

The kid loved football so much that even after Jose broke him, and he suffered through injuries, and having earned enough cash from his playing days to fund 4 lifetimes, he still turned out for the likes of Coventry City down the leagues and then spent two full seasons at the Tampa Bay Rowdies where he played 82 games, presumably whilst being paid a pittance.  The love of football and desire to play the game is something even Jose couldn’t steal from him.  Whilst I think what Jose did to him is a minor football tragedy, I’ll always remember the 5 precious seasons I had watching the kid with the untucked shirt which looked two sizes too big for him scampering around the pitch making everyone else look amateur in comparison, with the massive grin on his face only matched by the ones of us in the stands lucky enough to be watching him.  Screw you Jose…
Mike, Cayman