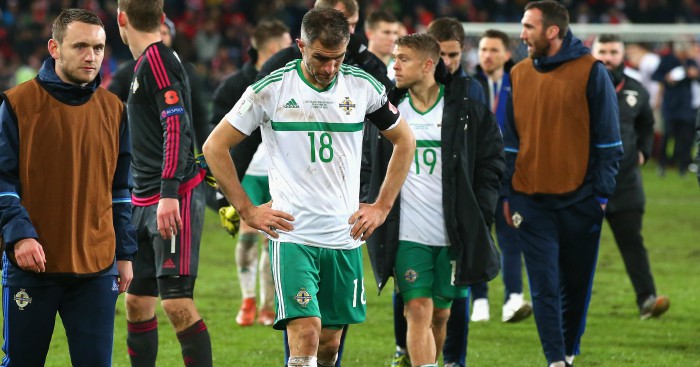 Michael O’Neill refused to discuss his future as Northern Ireland manager after his side agonisingly missed out on a place in next year’s World Cup after a play-off defeat to Switzerland.

Northern Ireland were held to a goalless draw in Basel, meaning Ricardo Rodriguez’s controversial penalty in the first leg at Windsor Park was all that separated the sides.

There have been suggestions O’Neill may now end a largely successful six-year tenure at the helm of the Green and White Army, but the 48-year-old was unwilling to think about his position in the immediate aftermath of his side’s setback.

He told Sky Sports: “I’ve not even given it any thought. I don’t think it’s a reasonable question at this time. My focus is with the players and the boys in the dressing room.”

O’Neill expressed his pride at Northern Ireland’s display on Sunday night but once again lamented the spot-kick – awarded for an apparent handball by Corry Evans – three days earlier that proved decisive over the course of the 180 minutes.

Northern Ireland had their opportunities in Basel, most notably in added-on time when Jonny Evans’ header was cleared off the line by Rodriguez as the Swiss narrowly held on to seal their place in Russia.

“I thought the performance was magnificent but ultimately we’ve gone out to a really poor decision in the first leg.

“I thought our performance was fabulous, our reaction to what happened on Thursday night was fabulous.

“We were the better team, I felt, and yes we had to ride our luck at times, we knew that, but right until the 94th minute we were pushing to try and keep our dream alive of going to the World Cup.

“There’s a devastated bunch of players in there but I couldn’t be any prouder of their efforts.

“I’m sure they’ll have some regrets about the performance in the first leg but ultimately if it wasn’t for the penalty we’d have drawn the first leg 0-0 and we’d still be playing extra time now.”