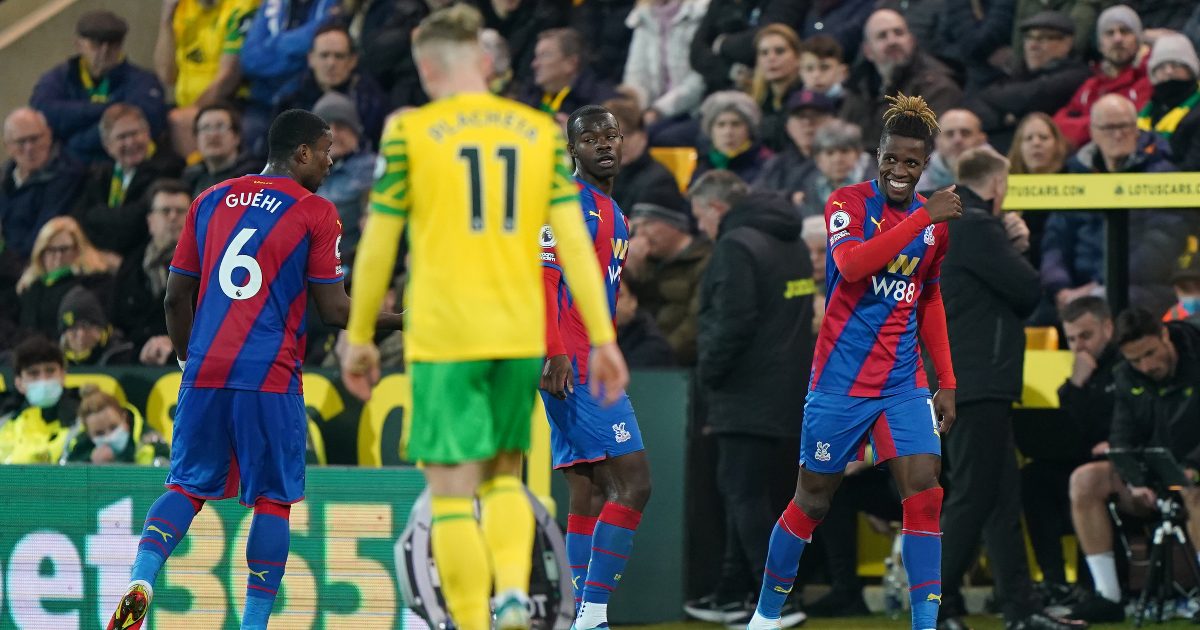 Wilfried Zaha scored a sublime goal to equalise against Norwich but Crystal Palace were made to settle for a point as he also missed a penalty.

A win for the Canaries would have moved them out of the bottom three.

Teemu Pukki scored for Norwich early on but they were not able to hang on for all three points.

Five Prem players who could be capped by England in 2022…

Instead, they were pegged back on the hour by a fine Zaha effort, the Ivory Coast international curling home from the edge of the area on his first appearance since Boxing Day.

He then had a fine chance to win it for Crystal Palace, who have now won just two of their last 12 league games, but he scuffed a tame penalty well wide after Tyrick Mitchell had been fouled by Max Aarons.

I thought Ronaldo and Elanga’s penalties were bad the other night.

It was almost as if Palace boss Patrick Vieira had pre-empted the topsy-turvy evening for Zaha in his press conference ahead of his return to club action following his stint at the Africa Cup of Nations.

“I think with his potential he can do more…I think he’s a player that can deliver and he needs to be more consistent,” he had said, with Zaha going on to prove his manager’s point.

Norwich would break the deadlock within the opening minute, Pukki finishing low for his first goal of 2022 after Adam Idah had touched Milot Rashica’s cross into his path.

Pukki was denied a second only by the brave defending of Mitchell, who stole in ahead of the Finland forward to nod Rashica’s cross behind for a corner.

It was his own dallying which would cost Pukki moments later, Rashica, enjoying his night up against Joel Ward, laying a chance on a plate for the striker whose loose touch allowed Mitchell to once again get back and challenge.

Jean-Philippe Mateta thought he had equalised as the half drew to a close but his deft finish was correctly ruled out for offside.

Much like the first half, most of Norwich’s attacking threat was carried by Rashica, whose low, deflected strike had Vicente Guaita sprawling before darting past the post.

At the other end, Angus Gunn had to be alive to the danger to palm away a Jeffrey Schlupp effort but Palace were knocking on the door.

Their equaliser would come in superb fashion as Zaha, quiet until this point, was afforded too much space by Przemyslaw Placheta and took full advantage by wrapping his foot around the ball and curling past Gunn.

Under two minutes later and Palace were presented with a golden chance to take the lead as Aarons clumsily bundled Mitchell over in the box.

Zaha, fresh from his sixth goal of the campaign, looked prime to double his tally for the evening but instead dragged a timid effort wide of the post.

There would ultimately be nothing to separate the two sides, with Norwich a point from safety and Palace still struggling for Premier League wins.