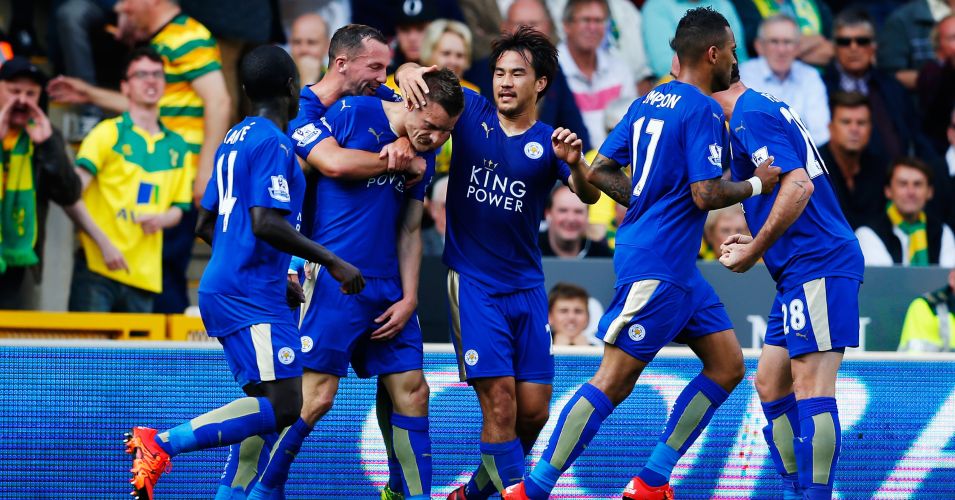 Jamie Vardy scored again as Leicester returned to winning ways with a 2-1 victory over Norwich in the Premier League.

Vardy was felled by Sebastien Bassong on 28 minutes and made no mistake from the penalty spot to score his seventh goal of the season, with the England international having scored in his last five Premier League games.

Leicester doubled their lead two minutes into the second half as Jeffrey Schlupp drilled past John Ruddy from N’Golo Kante’s cross.

Diumerci Mbokani threatened a Norwich comeback late on with his first goal since signing in the summer, but the Foxes held on for all three points.

For Norwich, Matt Jarvis was back in the line-up after the on-loan West Ham forward was ineligible to play against his parent club last week. Nathan Redmond, scorer in their 2-2 draw against the Hammers, started from the bench.

Riyad Marhez was the surprise omission from Ranieri’s line-up. The Algerian striker has scored five times this term, but was handed only a place on the bench.

Leicester suffered their first defeat of the season last time out against Arsenal and at a sun-drenched Carrow Road, Norwich created the first chance of the game.

With only three minutes gone, Cameron Jerome linked up well with Wes Hoolahan on the edge of the Leicester box, but he blazed his right-footed effort over the bar.

Leicester were then content to allow Norwich to have more of the ball, but as the first half progressed they started to dominate proceedings.

Vardy, always an out-ball for the visiting side, brought John Ruddy into action for the first time with 20 minutes gone. Vardy produced a neat step-over inside the area but his shot was saved by Ruddy at his near post.

Vardy then fell under the challenge of Sebastien Bassong in the area and referee Mark Clattenburg had no hesitation in pointing to the spot. Bassong protested his innocence, but Vardy stepped up to convert from 12 yards. It was his fifth goal in as many games and his seventh of the season,

Moments later, and with the hosts seemingly rattled, Leicester should have doubled their lead. Marc Albrighton crossed from the right-hand side, and Schlupp, sliding in, looked set to convert at the far post, but the ball grazed the bottom of his studs.

The home fans were growing increasingly frustrated as the half-time whistle blew and it did not get any better after the interval.

Many of the home fans were still taking their seats when Leicester broke down the left-hand side. A brilliant reverse pass from N’Golo Kante sent Schlupp through on goal and he put his left-footed shot into the far corner.

Norwich probably should have been awarded a penalty of their own after 50 minutes when Robert Huth appeared to grapple Jerome to the floor but Clattenburg was unmoved.

After an hour Mbokani replaced Jarvis and it was not long before the Congolese striker had an impact. He hit the crossbar with a header after 66 minutes before giving Norwich hope when he converted Jonny Howson’s cross.

The game had exploded into life and down the other end, Leonardo Ulloa saw his headed goal ruled out for a push on Jerome.

Unaware of the decision Ulloa, who had only been on the pitch for 20 seconds, celebrated in front of the away fans, but it was the right call from Clattenburg.

Kasper Schmeichel produced a fine save from Redmond.

And in the closing moments Redmond saw his shot deflect off Danny Drinkwater and Leicester clung on to claim on all three points.