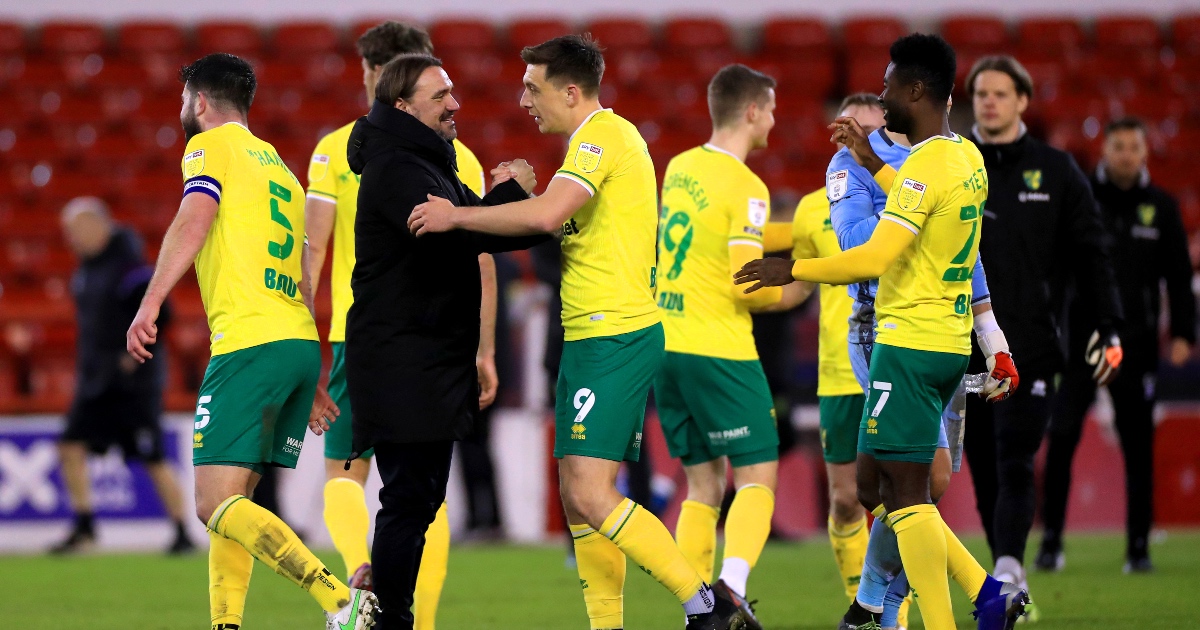 Norwich have secured promotion back to the Premier League without kicking a ball ahead of their Saturday night match with Bournemouth.

The Canaries were aware a victory over the Cherries at Carrow Road would ensure an instant return to the top flight after they were relegated in July.

However, promotion rivals Swansea and Brentford both failed to win in their 12:30pm kick-offs against Wycombe and Milwall respectively.

FEATURE: The 20 Premier League regulars yet to score a goal…

Swansea scored twice late on to draw 2-2 with Wycombe at home, while Brentford’s match against Millwall ended goalless.

That means Norwich’s points total of 90 can only be reached by Xisco Munoz’s Watford, who occupy the other automatic promotion spot in second.

The Canaries will get the chance to toast their top flight return and remain on track for the title with victory over Bournemouth on Saturday evening.

Boss Daniel Farke remained in charge despite their bottom place finish in the Premier League last season and has masterminded a superb campaign, with 27 wins out of their 41 league fixtures so far.

The promotion is their fourth in the last ten seasons and their second under Farke since he took charge in May 2017.

Farke’s team includes many players from their last campaign in the Prem, including Todd Cantwell, Teemu Pukki and Tim Krul.

Emi Buendia, who has been heavily linked with a move to Arsenal, has been in good form yet again this season.

He’s scored 12 goals and registered 16 assists in the league alone.

Speaking about their ability to compete in the top flight, Farke said: “It’ll still be a big task for us to be a Premier League club. We are the only self-funding club on this level and we don’t have the financial opportunities like our competitors.

“But I think in general the financial problems are sorted. We have invested in the infrastructure and we have a squad where several players have Premier League experience.

“We’re in a much better position compared to where we were two years ago.”

One crucial aspect for Norwich will be keeping hold of the players that have taken them back to the Prem.

Max Aarons has caught the eye of Newcastle scouts and Norwich will have to stay firm if they want to keep the talented right-back.