Home F365 Features Norwich City: How the f*** has this happened? 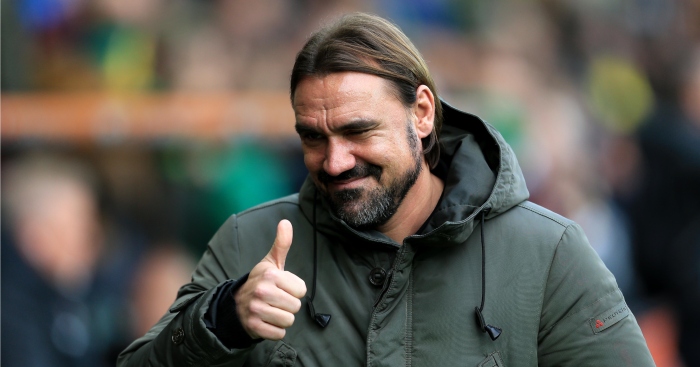 Norwich City are the surprise Championship leaders, so let’s take a look at how this happened…

How on God’s green earth are they top?
If your mate had turned to you at the pub in July and said “so, who will be first in the Championship come November?”, we’re pretty sure your response would have been a) puzzlement at such an odd question and b) pretty much anything but “Norwich City, of course”, but perhaps we shouldn’t be so surprised; over the past two seasons the Canaries have followed a path similar to that of Huddersfield Town by picking up an unknown manager from Germany in Daniel Farke and letting him bring in his own players. That element of surprise has been one of Norwich’s greatest assets, with everybody talking about Leeds, Derby and Stoke while City march on away from the spotlight.

While all those sides have faltered, Norwich have reeled off five consecutive league wins – their first such run since their last promotion campaign of 2014/15 – culminating in a 4-3 victory over Millwall on Saturday courtesy of two injury-time goals. That 4-3 win pretty much sums up this Norwich side – they have conceded more goals than 13th-placed Bristol City. Is it sustainable? Does it matter right now? This is fun…

Is it still Delia Smith cooking up a storm in Norfolk?
Chef Delia Smith and her husband Michael Wynn-Jones have been the majority shareholders at Norwich since saving the club from administration in 1996. A recent addition to the hierarchy is Ed Balls, who took over as chairman of his boyhood club in December 2015. Whether you remember him as the retired politician – or the man who danced Gangnam Style in series 14 of Strictly Come Dancing – that’s the guy with major pulling power at the club these days…

Together they took a risk in hiring German manager Farke ahead of the 2017/18 season. With his calm demeanour and slicked-back hair, it was easy for the Canaries faithful to connect with their new boss, which is perhaps why he survived a rather unsuccessful first season in charge, when he managed only a 14th-place finish. Or perhaps they recognised that he was the reluctant figurehead for a pretty drastic fire sale as a raft of players were sold. His hands were tied.

Things didn’t appear to have improved during the first few months of this campaign, with just one win in their opening six games and 11 goals conceded. A 1-0 home win against Middlesborough would prove to be a catalyst for nine wins in their next 11 games, leading them to their unlikely place at the top of the table. Their points tally would only earn them a play-off spot in any other season, but this is not any other season…

Have they spent shedloads of money?
Really, really not. Millwall boss Neil Harris made the mistake of suggesting they had spent money for a promotion challenge last week and was given short shrift, Farke saying: “I can only judge what happened here since I arrived in the last 18 months. In that period, no other club in this country has earned as much in transfer fees as we have. I am not sure what our most expensive signing is but it wasn’t unbelievably expensive. I know that much. We lost players because we had to earn money.

“You can name them, Jonny Howson, (Graham) Dorrans, (Alex) Pritchard, (James) Maddison, (Josh) Murphy. We can go through them all.”

The Canaries raked in around £33 million from the summer sales of Maddison to Leicester and Josh Murphy to Cardiff City. Rather than chase big-money targets, Norwich chose to play it smart in the transfer window, either picking up foreign players on the cheap, or taking advantage of the bargains presented by the domestic market.

Ben Marshall was their most costly signing, jumping ship from Wolves for a fee of around £1.5million, cheap as chips in modern-day football. Former Germany U-21 international Moritz Leitner made his loan deal from Augsburg permanent for a similar fee, while Emiliano Buendia signed from Getafe off the back of an impressive loan spell with Cultural Leonesa despite their relegation from the Spanish second tier.

The domestic market was used to deadly effect, with Tim Krul joining on a free transfer after his release from Brighton alongside Jordan Rhodes, who signed on a season-long loan from Sheffield Wednesday. Borussia Dortmund wonderkid Felix Passlack also made the switch on loan, while Teemu Pukki signed on a free transfer to lead the line.

The production line continues to roll on at the academy as well. Left-back Jamal Lewis, right-back Max Aarons and winger Todd Cantwell have all gone on to establish themselves in the first team this season. Norwich have a cheaper, younger side than ever before.

What’s their style? More Fulham or Cardiff?
Farke has stuck to a 4-2-3-1 formation for most of his time in charge. Described as per Norwich fans’ rap, ‘he’s standing by the bench in his trendy parka – a true tactician and a zonal marker’. Basically, as is ever increasing in English football, he likes his team to win with style and grace, giving supporters their weekly dose of sexy football. So definitely more Fulham.

But unlike many coaches who sacrifice resilience for attack, Farke demands his team are able to defend. His commands to keep the ball and dominate opponents are Plan A, but his defence are expected to remain compact and read the game well. They are a brave team not afraid to press high.

When attacking, constant movement is key, shifting opponents from side to side looking for chinks in their armour. The pace and enthusiasm of their young full-backs Lewis and Aarons provides Farke with an attacking threat down the flanks, while Pukki is no stranger to playing off the last man to latch on to a cheeky dink over the top.

Not for the first time in recent weeks, Norwich City move an opponent this way and that before doing the thing that’s so hard to do – sticking the ball in the net.

So who’s this fella Pukki?
People who claim to have known Teemu Pukki before he joined Norwich are either very sound on their football knowledge, or are simply telling porkies. You might possibly have spotted him during a forgettable one-year stint with Celtic, but he managed just seven goals and was quickly shipped out on loan to Danish side Brondby, eventually signing there permanently the following season.

His contract at Brondby expired in the summer after a productive season which saw him net 19 times in all competitions. His arrival at Norwich raised a few eyebrows, with fans expecting him to drop down the pecking order behind the likes of Rhodes and Nelson Oliveira. What’s transpired this season has been nothing short of a miracle, with Pukki comfortably becoming Norwich’s leading scorer with nine goals.

Where are you? Let’s be ‘avin’ you! – Is that the cry from the Premier League?

Sorry to steal part of your famous cry to the Norwich fans Delia, but it poses a genuine question – would Premier League sides want to face the Canaries? On their current form, it could be argued that Norwich would prove a thorn in the side of most top-flight outfits.

Wolves have brought a similar style of high-tempo, high-press football following their promotion from the Championship last season and it has led to widespread praise of them and their manager Nuno Espirito Santo. There’s no reason why Farke’s Norwich couldn’t ruffle some feathers in a similar way. Though they would not be able to afford half of Portugal.

Whether Norwich will be in the upper reaches of the Championship come May is an impossible question to answer at this stage, with this proving to be the most wide-open title fight in recent memory. What Farke’s men have displayed – in contrast to those around them – is consistency. Those nine wins in their last 11 games simply hasn’t be matched. Middlesbrough have drawn their last three, Leeds have won just three of their last seven Championship matches and Sheffield United haven’t won back-to-back games since the start of October.

This division is a slog and Norwich have bulldozed their way to the front of the race. That they are still only fourth favourites for promotion tells you the size of the pack behind them.