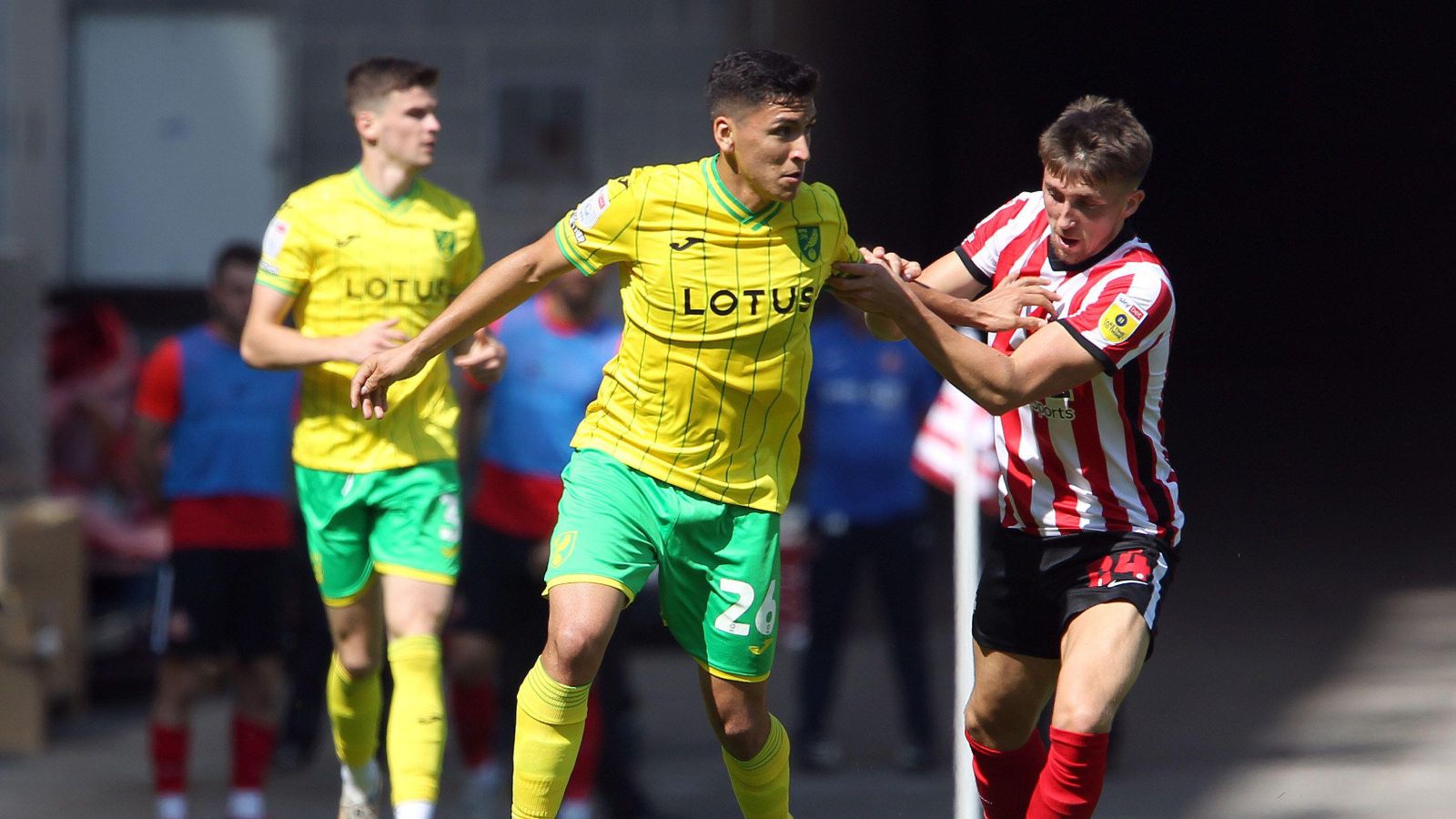 Championship clubs spent just over £79m on new players in the summer, the highest since £174m was splashed out before the 2019/20 campaign.

Taking into account all clubs, the league has made a £117m profit this summer, with £196m being made in player sales.

Eight of the Championship’s 24 clubs have made a loss and of them, two find themselves in the top six after eight games.

Fees are taken from transfermarkt…

Unlike their relegated cohorts (more on them later), Norwich only had one significant sale this summer as Pierre Lees-Melou moved to Ligue 1’s Stade Restois for just over £2m.

Dean Smith managed to keep the majority of his relegated squad together, with Gabriel Sara (£9.45m) and Marcelino Nunez (£3.51m) joining their ranks.

Nunez looks to be a top addition, while Sara is currently finding his feet in English football. Norwich’s summer investment leaves them on track to return to the Premier League at the first attempt before they come straight back down again.

Alex Neil reportedly cited a lack of backing as a reason for him jumping ship to take over at Stoke City. That claim does not hold much weight with Sunderland in the automatic promotion places on this list.

£1m+ was spent to bring in Dan Ballard and Jewison Bennette. They will also no doubt be paying a pretty penny on wages for loan stars Ellis Simms (Everton) and Amad Diallo (Man Utd).

The Blades are sitting smugly at the top of the Championship. They have mostly relied on the loan market for their recruits, with Man City duo Tommy Doyle and James McAtee standing out.

The only player Paul Heckingbottom has spent money on is Anel Ahmedhodzic, and what a revelation he’s been. The goalscoring defender will make Sheffield United a lot of money one day…

A few years in the Championship has enabled the Londoners to spend £2.25m on Zian Flemming this summer.

16 goal involvements in the Eredivisie last season was a bit misleading on early evidence, as the winger is without a goal or an assist in five games for Millwall.

The Hatters were surprising promotion candidates last season and £1.8m has gone into signing Carlton Morris from Barnsley. Around £100k has also been paid to Hearts for back-up goalkeeper Matt Macey.

Some eyebrows were raised when the fee for Morris was revealed, but three goals in eight league games is a solid start.

Rovers would have found themselves way lower than sixth on this list had they cashed in on reported Everton and Fulham target Ben Brereton Diaz.

The prolific striker remains at the club *for now* and £1.58m was invested to snatch Dominic Hyam from Coventry City. They will recoup that in January if Diaz is sold before his contract expires in June.

It is hard to have confidence in the Baggies as long as Steve Bruce is at the helm, but they did some good business during the summer.

Jed Wallace and John Swift on free transfers were shrewd additions, while they spent money to sign Jayson Mulumby (£900,000) from Brighton and Brandon Thomas-Asante (£300,000) from Gary Neville’s mob over at Salford City.

The Bluebirds find themselves in the bottom three, but on paper at least, they made some positive summer signings with Romaine Sawyers and Sheyi Ojo among them.

Transfer fees were involved to sign Kion Etete, Ollie Tanner and Callum Robinson, though the value of the latter is yet to be confirmed.

22nd-placed Cardiff will be hoping that ex-West Brom star Robinson can spearhead their rise up the table. If not, they are in for a long old season.

These clubs relied on free/loan transfers this summer and they did not receive a fee for any departing players. How dull.

Now onto the profit-makers. Birmingham City kick us off and with their ongoing struggles behind the scenes, it is hardly surprising that they are not higher up/lower down this table.

They have sold Fran Villalba and Ivan Sanchez to Sporting Gijon and Real Valladolid. The fee spent for Tabith Chong is unclear and aside from the Man Utd academy, they have focused on loanees/frees.

Ex-Premier League goalkeeper John Ruddy is among their signings. Yes, he is still playing football for a living.

Dutch defender Jordy de Wijs has made his loan to Bundesliga side Fortuna Dusseldorf permanent for £810,000 this summer. A good move for him.

Full-backs Kenneth Paal (free) and Ethan Laird (loan) have highlighted their recruitment as Michael Beale’s team look to mount a push for the play-offs.

Refer to the Blackburn section. Coventry could do with using this £1.58m on sorting their pitch out, really.

Now a club that has both spent and received money for players in the summer, how exciting.

Admittedly, this only involves two players and these signings came about late into the window. Josh Bowler was one of 23 (yes, TWENTY-THREE) players Nottingham Forest signed.

A small portion of that fee was used to sign 22-year-old right-back Andy Lyons from Shamrock Rovers. He will link up with Blackpool in January.

Turkish businessman Acun Ilicali became Hull City’s new owner earlier this year. Upon taking over, he proclaimed: “You’re going to see the craziest things owners have done in the history of football.”

That has got off to a relatively slow start as they have not gone mad this summer. Their profit is due to Keane Lewis-Potter joining Brentford for £17.1m.

Meanwhile, over £10m was spent in total to bring in Allahyar Sayyadmanesh, Dogukan Sinik and Ozan Tufan. They have also signed Adama Traore (not that one) and Oscar Estupinan (he’s bloody good) on free transfers.

The Swans paid around £1.5m to sign Flynn Downes in 2021 from Ipswich Town. A year later, West Ham have splashed out more than six times that amount to snatch the midfielder away.

Swansea have spent part of this £9.59m wisely as just over £2m was used to sign Harry Darling, who was one of the best defenders in League One last season.

The Terriers lost in the Championship play-off final against Forest last season and they have been stiffed by the Premier League side (Evangelos Marinakis, more specifically) this summer.

The newly promoted outfit spent £145m, while Huddersfield have only paid out £1.37m.

Jack Rudoni (£845,000) looks to be a good addition, but losing Lewis O’Brien and Harry Toffolo to Forest for over £10.5m is a blow. Though Carlos Corberan leaving to take over at Olympiacos (same owner as Forest) makes matters worse.

Boro kick off the bottom three (or top three?) with Djed Spence being their most expensive sale. Despite not being fancied by Neil Warnock, he is now working under Antonio Conte… he’ll take that.

That plus Marcus Tavernier’s move to AFC Bournemouth has helped Middlesbrough spend seven-figure fees on Marcus Forss, Matthew Hoppe and Matt Clarke. The latter looks to be the pick of the bunch.

The Hornets’ most expensive summer sale was Hassane Kamara. A player who was sold for £17.1m to Udinese, only to be loaned back to Watford. Udinese, a team also owned by the Pozzo family. So, that is dodgy as f***.

Emmanuel Dennis (£13.3m) and Cucho Hernandez (£8.59m) exited in a more morally correct manner than Kamara, which is not difficult.

Watford, with their replenished cash flow, have only paid for one player. This is ex-RSC Charleroi striker Vakoun Issouf Bayo. He is partnering Joao Pedro and Ismaila Sarr, who are somehow still Championship players.

Last up we have the Clarets. They were always likely to end up here after Premier League clubs had the pick of their best players in the summer.

Nick Pope, Maxwel Cornet, Dwight McNeil and Nathan Collins all moved on for fees, while James Tarkowski, Ben Mee and Wayne Hennessey returned to the top flight on free transfers.

Vincent Kompany has raided the Belgian Pro League for the majority of his signings, while Scott Twine and Luke McNally have stepped up from League One. Goalkeeper Arijanet Muric has been bought from their manager’s beloved Man City.

Burnley, Norwich City and Watford find themselves way apart in this table, but they all have just as good a chance of going up. Perhaps that proves how stark the quality gap between the Premier League and Championship really is.