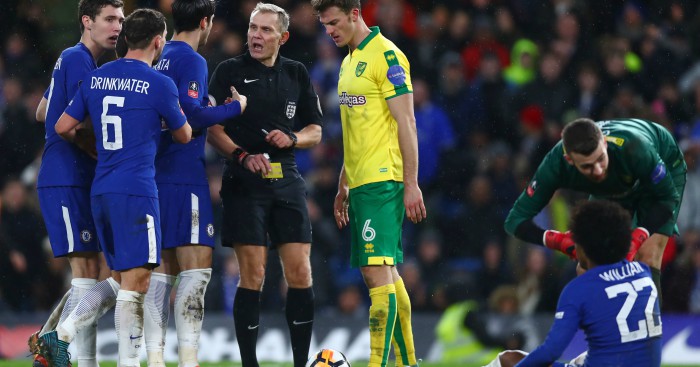 Norwich defender Timm Klose has admitted he fouled Willian in a decision which ignited Video Assistant Referee controversy as Chelsea were denied a penalty.

Chelsea survived a scare on Wednesday night to advance in the FA Cup, prevailing 5-3 on penalties after a chaotic replay at Stamford Bridge.

Former England captain Alan Shearer, working as a pundit for the BBC, criticised the decision of match referee Graham Scott not to consult VAR Mike Jones over Klose’s challenge on Willian early in the first period of extra time. Shearer described VAR as a “shambles”.

Klose afterwards conceded it should have been a penalty, before admonishing Chelsea’s players for diving. Pedro and Alvaro Morata were both sent off for two bookable offences, with both players’ first yellow cards coming for diving.

Klose told talkSPORT: “I think the first one on Willian is a pen. I’m brutally honest there. I think I caught him.

“On the pitch I was not sure because it happened so fast. When I saw it again afterwards I was like ‘ooh, that’s quite close’. I guess you can give it.

“The second one was a dive, from then on they pushed it too hard, went down a little bit too easily.

“Of course VAR would help the referee sometimes in some situations, but I’m not a big fan of it. Football is all about these situations.

“We all remember (Diego) Maradona heading the ball with his hand (against England in 1986) or Frank Lampard against Germany (at the 2010 World Cup).

“Those are things in football you need, it puts emotions on, you can write about it, the TV stations have something to talk about. I don’t know if I like it.”

Willian had no doubts it should have been a spot-kick – otherwise he says he would have scored.

The Brazil playmaker told Chelsea TV: “For me it was a penalty, 100 per cent. It was a little touch, but it was enough for me to go down. If not I’m going to score the goal.”

Pedro and Morata will now be suspended for Chelsea’s Premier League trip to Brighton on Saturday, so Michy Batshuayi may continue up front.

Batshuayi struggled to convince despite his second-half strike ending Chelsea’s wait of over five hours for a goal.

Goalkeeper Willy Caballero saved from Nelson Oliveira to put Chelsea in control of the shootout and the Blues netted all five of their spot-kicks.

Despite believing Chelsea were denied a penalty in the Willian incident, Caballero backed VAR and believes the system will only improve with time.

He told the London Evening Standard: “There was a little touch. If it was a penalty or even if it wasn’t, it wasn’t a yellow card.

“But we have only used VAR for a few games so everybody will improve – referees, players, supporters and the media.

“It will need time. With a run of games it will improve because it is a very good instrument.

“It is good for the game and for us.”

Caballero also defended the actions of Pedro and Morata.

“In this situation, in a fraction of seconds, sometimes they are very close to scoring. I’m not sure if they dived,” he added.

“I don’t know if using VAR would have led to a correction.”