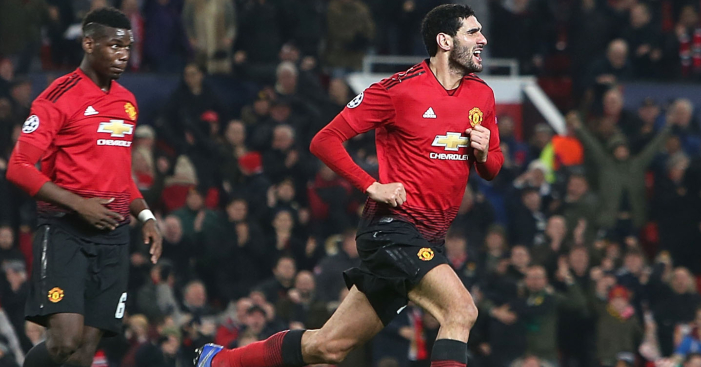 An age old question through the years and still today is of the form “How would INSERT TEAM YOU WANT TO BERATE cope without INSERT PLAYER YOU THINK IS CARRYING THE TEAM?”

However, the reason I was thinking about this is that Man Utd are for the first time in my memory in a position where there is not a single outfield player that you would say you would even be concerned about not being available. In years past you could have debated Robson, McClair, Hughes, Cantona, Keane, Ronaldo, Van Nistelrooy, RVP and many others. Even the last year or two you would have said the side were weaker without Pogba, Matic or Lukaku. But right now, there is not a single player who, if they are not available for selection, you worry about how the team will play. And I don’t think it is just because we are sh*t. Even the relegation threatened teams normally have one or more players that stand out from the crowd.

Jose and only Jose has turned a talented and expensively assembled squad into a collective bunch of Meh-ness.
Jon, Cape Town (a person who feels appreciated will always do more than is expected – Jose out since before he was in)

Pogba’s haircuts
F365 has nailed their colours firmly to the mast on this issue. Haircuts don’t matter and we’ll mock anyone that even mentions them.

I’ve always thought you missed the point (possibly willfully, simply so you can keep banging your own drum). Especially with regards to Pogba, for me pundits’ and reporters’ continual references to his haircut obsession has been just using one (the most visible and easiest) facet of his lifestyle to exemplify how he should be focussed on being the best footballer he can be rather than being a social media celebrity who also plays football.

And now it’s come back to bite him on the arse, deliciously because of the exact thing F365 has been mocking.

Still think it doesn’t matter, or are you still going to pretend to misunderstand the point?
Ian

Henderson’s five problems
I am not a Henderson hater. I don’t think he’s brilliant, but neither does he merit the constant slagging. He’s quite a good player (as manifested at the World Cup).

However there are five issues with Henderson, none of which have much to do with his own playing capabilities:

First, he is not Stevie G.

Second, he does not seem like a natural captain. He’s not an automatic selection and he seems to be trying too hard at it. Too much gesticulation. VVD or Milner seem more natural candidates.

Third, he just has one those faces that… arrrh (not helped by the constant showing of that Nivea advert). Perhaps I’m being unfair here.

Fourth, none of Liverpool’s current midfield are especially good. If there were a Coutinho / Asensio in the team, most people might think that he’s doing just fine. Liverpool’s midfield is lacking something at the moment but that doesn’t mean the focus should be on Henderson. None of Wijnaldum, Keita, Lallana, Fabinho, Milner nor Shaqiri are playing scintillatingly at present.

Fifth, its all in the name. Henderson is the name of a second-rate certified accountant wearing a cheap suit. You’re going to be bored before you’ve even met him. Now Zico, or Socrates, they’re going to be good. Henderson – meh. And Hendo doesn’t work as a nickname.
Garth Litmus

A selection in response to Smiddy
I think LFC fans like Smiddy are losing the run of themselves a bit.

Full disclosure – I’m a Man Utd fan. I have loathed Klopp since the second he got the Liverpool job.

He annoys the living sh*t out of me – the over the top reactions (which are definitely all for the camera), the fake geniality and “banter”, his lid/teeth combo, and that thing that all Liverpool managers seem to do, i.e. “look at me I’m winding up United, I get it, I get you, I am you”. He is insufferable. Eurgh.

But get rid of him? Are you f*cking mental? Almost every Liverpool team in my memorable lifetime (1991 onwards, aged 5) have been basically varying degrees of average with only three exceptions. The brief spell in 1996 (bottled it), the plastic treble team that also came 2nd in 2002 (bottled it then fell apart completely), and Benitez era 2008-9 (bottled it, chuck and go sh*te football anyway).

Then there’s this bunch. Nailed on for a top 2 slot, decent chance of making the Champions League knockouts (and from there, clearly, capable of beating anyone). A real, recognisable style of play. A fanbase more or less united behind the manager. Some brilliant young players being phased in, and considerably less mercenaries than most of the other big 6.

There’s no stadium debt, there’s no owner debt, there’s no human rights violations and state-sponsored famine of Yemenis that brings shame to all of football, no oligarch swindling of a nation’s wealth and no equivalent of ArsenalFanTV – the whole club, painfully for United fans, all moving in the right direction. You’ve got it so, so good. If you think that sacking Klopp is the right thing to do, then you’re mad – but I’d take the annoying tw*t at Manchester United in a heartbeat. If nothing else he’d deck Pogba’s agent.
Jonny, MUFC

…Did Smiddy really just write in complaining about the fact fans were happy when Klopp signed van Dijk and Allisson. On a broader note, are Liverpool fans really that unaware of how good they’ve currently got it? As it stands:
Second in the league, unbeaten and two points off the top. Boo f*cking hoo.
Got beat by the most expensively assembled squad in the world. Boo f*cking hoo.
Still got the ability to get out of the hardest group stage of the Champions League. Boo f*cking hoo.
Literally the best performing Liverpool team in a generation or two and everyone’s shitting the bed after a couple of lacklustre results. This is a problem with football today, and society but we won’t get on to that. Everyone lives with two principles; one is that no matter what the context, the most recent result and performance dictates everything. The second is that nothing can be OK – everything has to be floating on clouds or burning in hell.

Get a f*cking grip. Take a wee breath and take stock of where the football club is in comparison to the overall picture. You’re doing ok.
Alex, (come watch Scottish Championship football – you’ll never survive that rollercoaster), Ayr

…F*ck off Smiddy. PSG was not a must-not-lose game. It was a free hit against a team that never loses at home. The next match is a must win game, at home. So what?

Liverpool have had their best start to a league season in my memory (i’m 40). The strike force might not be clicking, but they are second having dropped 6 points (to Arsenal, Chelsea and City). Six months ago we were in the CL final.

They have the joint best defence in the league, and have attracted some of the best players in the world recently, well, best that would consider Liverpool (obvs not of Messi, Ronaldo or Mbappe class).

I suspect you are not a Liverpool fan or supporter. There is no way any true Red wants Klopp to leave at this point.

…In response to ‘Smiddy’ can I just say, as Jurgen might, WOW! BOOM! etc etc

He’s been ready and primed for a negative result to get that off his chest hasn’t he? What a spiteful, contradictory, egotistical, weird load of nonsense that was. A single goal defeat to a team with the two most expensive players in history in it, plus an array of other, expensively assembled, quality footballers……occasionally, in their home stadium, they will give you a very tough game and you may fall a little short. To say nothing of the fact that to seal a narrow win they put on one of the biggest displays of all round shithousery seen in quite a while. You know, these things happen, we move on.

There’s no chance of Jurgen having an Auf Wiedersehen forced upon him by the club for quite a while yet, so if this is Smiddy’s standard reaction to a defeat can I advise him to seek medical and psychiatric help before it all gets too much?

Having said that he didn’t care to (or have the balls?) to clarify if he’s a Liverpool fan or has an allegiance to a rival, so perhaps we should just be applauding a top notch effort at sh*t stirring?
Cheers, Bobby.
PS – I was at the match, having paid a disgusting face value amount to do so, and my biggest disappointment was not getting a glimpse of DiCaprio or Jagger. They weren’t in the bogs at half time as far as I know.

…Instead of gratifying Smiddy with a response (because his mail is nonsense of the highest order) I ask one question; is Smiddy to be the LFC equivalent of Stewie Griffin?

We played awful, let’s not sack the manager over it. The manager is allowed to back his players for as long as he thinks he needs to work them out. He built that Dortmund team without spending hundreds of millions of euros so I’m confident he knows more about the mix of ingredients that make a great team or individual player than any of us.
Minty, LFC

That’s like going to Rome and criticising Michelangelo for not composing music, or Pavarotti for not playing the guitar.

…I totally agree with Rob (I love him), Leicester, what nonsense Sarri is speaking? Kante is truly world class, the best player in the world in his position and would improve any team he played for. If Sarri can’t see that Kante should hand in a transfer request and go play under a manager that appreciates how good he is. This Chelsea side wouldn’t have much chance of finishing in the top 4 nevermind winning the title without him so they’d get a unpleasant awakening if he left.

I’m expecting Sarri to follow BS up soon with Messi has no skill, Ronaldo is a terrible goalscorer and John Terry should get a sainthood!
William, Leicester

Neymar sums up the modern game
Sorry, I know you probably wanna let this go now.. as by the time you publish this (if you do) it will be yesterday’s fish n chip paper, but…

Sadly, I think Neymar is the epitome of what football has become.. and it’s our fault, because we have allowed it to happen.

You see, everything we complain about in the modern game gradually becomes ‘acceptable’ with time.. because nothing is done.

Yes, Neymar gets roundly mocked by the public and some quarters of the sports media. But, the media broadly seem to caveat their mockery with lashings of praise about how ‘good’ he is…

Sorry, but sorry… No.. his ‘ability’ is an irrelevance in the face of his conduct.

It is so sad that the guy will only EVER be remembered for being a total and utter berk.

But it is sadder that the footballing collective, as a whole, generally just has a bit of a moan about it, and then carries on regardless.

But most tragic of all, is that his getting away with it, tells the kids of today that it’s OK.

That there is no retribution for this type of conduct, says everything you need to know about the game.

I’m afraid football has disappeared up it’s own Rivaldo.
Who I blame for all of this, by the way.
Sean (I didn’t even watch it)